Film Review: Rocketman is a blast

Revelling in the pure emotionalism of the stage musical, Mel Campbell is singing along to this Elton John biopic.
Mel Campbell
[This is archived content and may not display in the originally intended format.] 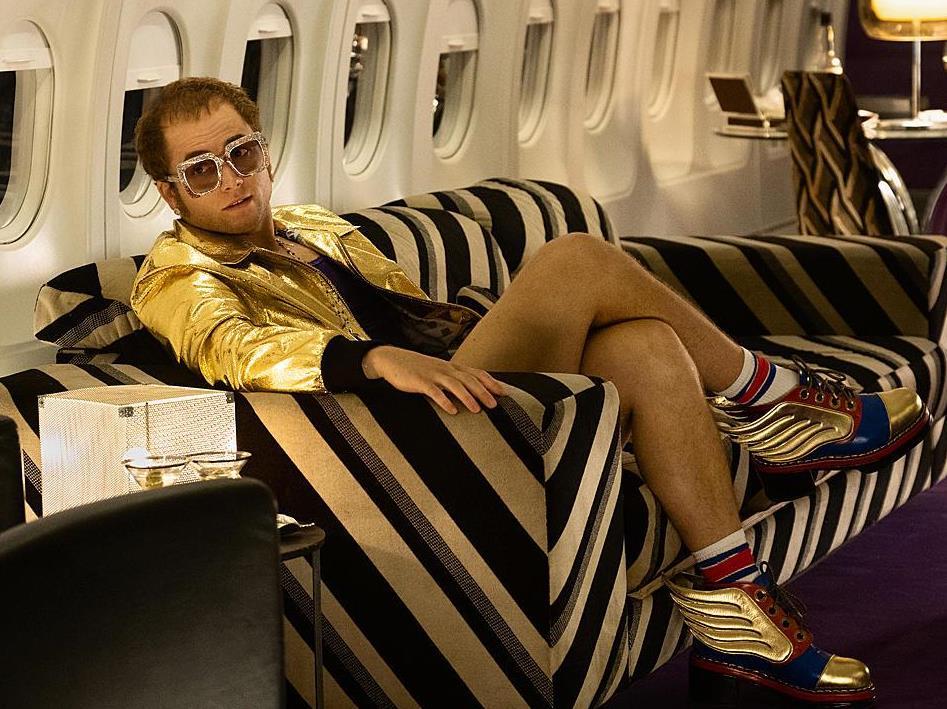 Image: The costumes are as stupendously wonderful as you’d expect. Source: Paramount.

Elton John’s music has graced cinemas before: you might remember it from key scenes in Almost Famous (‘Tiny Dancer’), Moulin Rouge (‘Your Song’); 27 Dresses (‘Bennie and the Jets’), or the 2011 animated film Gnomeo and Juliet. Most recently, the animated film Sing was basically an audition tape for Taron Egerton, whose gorilla character triumphantly performs ‘I’m Still Standing’.

Now Egerton is playing Elton. He’s funny, approachably hot, sometimes uncannily like the real John, yet seldom as unpleasantly vain or churlish as the diva depicted in husband David Furnish’s 1997 documentary, Tantrums and Tiaras. Apart from some enjoyable teasing about baldness, this is a glossy, flattering portrait. Yet Rocketman’s indulgence of its subject reveals an honesty of spirit: it explores how and why self-protection becomes self-indulgence.

Rockists mightn’t like Rocketman. If you go into it expecting insights into John’s creative process, or a rags-to-riches chronicle of the success he reaped from an astonishing work ethic, you’ll be disappointed. The thing is, Elton John is a bigger pop-cultural presence than a realist biopic can capture. He’s been so famous, for so long, that his gaudy persona has overshadowed the labour that went into honing it; and his best songs have seeped into pop culture, and the fabric of people’s lives.

Listening to them now – which I’ve done a lot since seeing Rocketman – their melodies and chord changes feel familiar at an almost elemental level, like the magnetic field that migratory birds use to navigate. Their original context as music-industry products has long since evaporated, and re-enacting it would just be dull. (That said, costume designer Julian Day does a stupendous job of recreating Elton’s real outfits – he even gets a victory-lap montage at the end.)

A corny framing device in which Elton storms into an AA meeting, wearing one of his flamboyant stage costumes, immediately flags the film’s psychoanalytical intentions. Flashback to shy queer kid Reggie Dwight (played as a small child by Matthew Illesley, and as an adolescent by Kit Connor), using music to escape the domestic cold war being waged between his uptight father (Steven Mackintosh) and dissatisfied mother (Bryce Dallas Howard), who later remarries to ageing rocker Fred (Tom Bennett).

In jukebox musical style, actual chronology and origins are jettisoned in order to weave the songs into the narrative wherever they have the most thematic relevance. Sometimes the effect is disconcerting, as when a grinning Illesley carols ‘The Bitch Is Back’, leading a troupe of dancing 1950s suburbanites.

But it can also be moving, as when ‘Don’t Let The Sun Go Down On Me’ and ‘Sorry Seems to Be The Hardest Word’ fill Elton’s brief marriage to Renate Blauel (Celinde Schoenmaker) with humanity and solidarity. In memorable set-pieces, Fletcher surrenders to fantasy altogether, as when the singer and his audience levitate to ‘Crocodile Rock’ at the Troubadour in Los Angeles.

The film grants most of its nuance to love between men. Elton’s two key relationships are with his lyricist and best friend Bernie Taupin (Jamie Bell), and his manager and lover John Reid (Richard Madden). Bernie and Elton share a tender but platonic intimacy, while John is ruthless and alluring both in business and in bed. John is exasperated that Elton is becoming a needy bitch; Bernie feels Elton is pushing him away.

After the much-criticised timidity of Bohemian Rhapsody, it’s refreshing to see gay sex treated frankly onscreen. When John seductively tells Elton that he doesn’t just like his song – “I like the singer” – my cinema audience burst out, “Ooooh!” But then Fletcher also lingers on Elton’s tender little postcoital smile to show how much this sexual awakening meant to him.

Meanwhile, Bell is terrific as Bernie, Elton’s work husband. His lyrics are inextricable from Elton’s melodies, and for me, the film’s best musical moments are those that explicitly mingle their two subjectivities. Elton sings ‘Tiny Dancer’ as he watches Bernie seduce a woman, infusing the song with the loneliness of the third wheel. And their partnership is a gift they exchange when Elton serenades Bernie using his own words: “You can tell everybody that this is your song…”

This is a very sentimental film – but then isn’t that the pleasure of musicals? I’m here for Rocketman’s exuberant mythologising.