Film Review: Parasite is satire at its most entertaining

Korean director Bong Joon-ho is a modern auteur with a wonderful popular touch. Mel Campbell celebrates his cinematic joys.
Mel Campbell
[This is archived content and may not display in the originally intended format.] 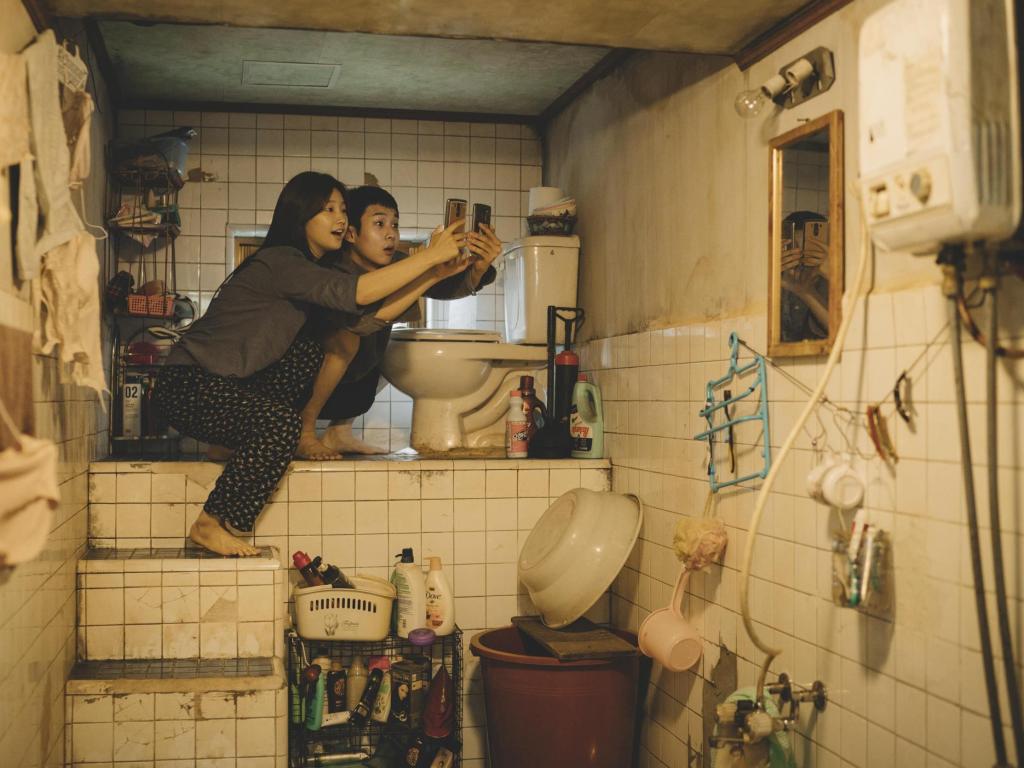 Image: the family in its lower depths

Bong Joon-ho has now directed both a film called The Host (2006) and a film called Parasite, which deservedly won this year’s Cannes Palme d’Or and, more recently, the Sydney Film Prize. Parasite is a rare treat: a caustic polemic that’s both beautifully crafted and endlessly entertaining. It is impeccable, sustaining shocking plot twists and tonal shifts between suspense, poignant family drama and slapstick farce without ever sacrificing its visual flair and impudent sense of humour.

Bong is interested in how private loyalties intersect and clash with the demands of systems and institutions. Like his 2013 film Snowpiercer, Parasite is explicitly about socioeconomic class; it tests the permeability of the borders between rich and poor, and their symbiotic reliance upon each other. Who’s the host, and who’s the parasite?

And, like Snowpiercer, Parasite chooses to depict class distinctions in an intensely spatial way. In Snowpiercer, the ark-train created a horizontal hierarchy; here, our gaze is vertical. We’re invited to follow the characters as they descend stairs and secrete themselves under furniture in a way that puts a pun in ‘debasement’; and we climb stairs and hills as they follow their aspirations and uncover shocking truths.

The impoverished Kim family – patriarch Ki-taek (frequent Bong collaborator Song Kang-ho), his wife Chung-sook (Jang Hye-jin), and their young adult children, son Ki-woo (Choi Woo-shik) and daughter Ki-jung (Park So-dam) – live in a dingy ‘semi-basement’ apartment. They leech wifi from nearby cafés, hustle a meagre living from precarious gigs such as folding pizza boxes, and endure drunken salarymen urinating on their street-level windows. They’re smart, skilled, resourceful, and they love each other – but they just can’t move up in the world.

Having charmed both Da-hye and her beautiful, anxious mother Yeon-kyo (Cho Yeo-jeong), who promptly re-names him ‘Kevin’, Ki-woo notices a framed picture drawn by the Parks’ Wes Anderson-esque young son, Da-song (Jung Hyun-joon), and promptly recommends a respectable art therapy teacher, ‘Jessica’… his own sister. Soon enough the whole Kim family is working for the Parks, pretending not to know one another: Chung-sook as the housekeeper, and Ki-taek as Mr Park’s chauffeur.

Parasite reminded me a lot of Jordan Peele’s Us (2019) in the way the two families operate as each other’s shadow selves. Every image or moment has a double meaning that advances the story, from a failed cake shop to the Boy Scouts. For instance, Chung-sook’s athletic past as a champion hammer-thrower, joyously flinging heavy weights away, ironically echoes the way a ‘lucky’ ornamental rock gifted to Ki-woo pulls the family down.

What gives the satire bite is that the Kims aren’t professional con artists but model neoliberals: bootstrapping self-starters who only seem like grifters because service workers are required to perform palatable false selves. Meanwhile, the Parks wield their privilege lightly and negligently. “If I was rich, I’d be nice too,” sighs Chung-sook. “Money is an iron; it smoothes out all the wrinkles.”

Mr Park (Lee Sun-kyun) dreads that his staff will “cross the line”; he demands the luxury of ‘smoothing out’ the wrinkles of humanity in those he exploits. But the musty scent of the semi-basement clings unavoidably to the striving Kims. Ki-taek fills with anger as he registers his employer’s prim revulsion at this social reality, and the way it undercuts even the most cunning aspirational plans.

We, too, are complicit in the film’s expressions of pleasure and disgust. Parasite invites us to reject the Kims’ depressing semi-basement and to find beauty and comfort in the Parks’ sunlit, sensuous life of leisure. So many films and TV shows similarly wallow in luxurious environments, inviting ordinary people to idealise wealth. But Parasite rages against any world where everyone is kept firmly in their place.