Auteur Claire Denis' first foray into English language cinema is a cool, calm sci-fi movie almost bereft of gadgets, with no aliens in sight.
Adrian Martin
[This is archived content and may not display in the originally intended format.] 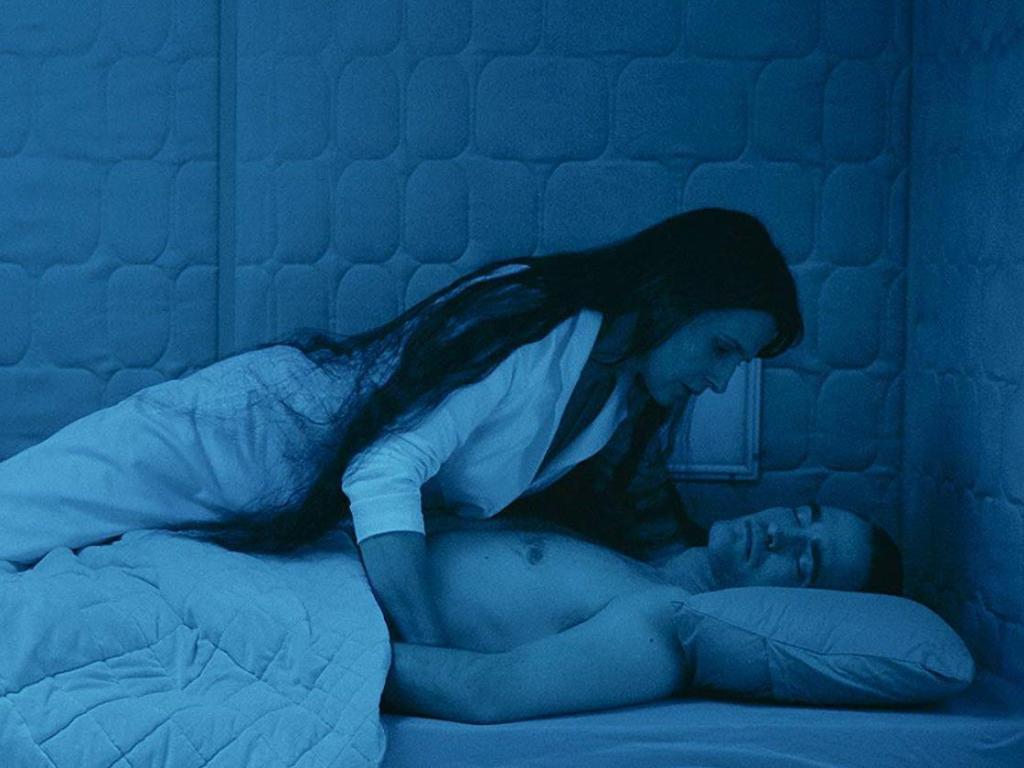 When Dusan Makavejev, the great film director from the former Yugoslavia, recently died, I re-watched his wonderful, scandalous Sweet Movie (1974) as a gesture of commemoration. The highlight of this film – as anyone who has seen it will never be able to forget – involves a “radical lifestyle” commune led by the Viennese artist Otto Muehl, in which its members liberate themselves from all bodily inhibitions, hurling food around like little kids and happily rolling naked in their own faeces. But there’s one detail I had not remembered: at the end, an Assistant Director credit for one “Claire Deni” (sic). For that was indeed where Claire Denis began her career after film school, as an assistant to Makavejev, Jacques Rivette and Wim Wenders.

That gaffe in the credits was doubtless just a typographic slip, but a usefully Freudian one. Déni in French means “denial” in the strong, psychoanalytic sense – a type of repression. There is not much denial in Denis’ own films, including Trouble Every Day (2001) and The Intruder (2004). Or, when there is, it is a sure sign of disturbance, unresolved conflicts and blocked desires – like in her masterpiece about a Foreign Legion patrol in Dijbouti, Beau travail (1999). Was Denis fondly recalling Sweet Movie – a film dedicated to the overcoming of all inhibitions – when she decided to stage, early on in her new High Life, the scene of a father playfully teaching his baby daughter this intriguing word, “taboo”?

By the way, this Dad and child happen to be floating in outer space. High Life opens with the strangest and most beguiling introduction to any science fiction “space opera” in cinema: while Monte (Robert Pattinson) works at fixing a fault on the exterior of the vessel, he monitors, through an earpiece, little Willow (Scarlett Lindsey) inside. When the girl cries out sharply, Monte flinches and loses his humble spanner in the void. This is the closest the film ever comes to the type of deep-space action familiar from 2001: A Space Odyssey (1968) or Gravity (2013).

It takes quite a while for a first-time viewer of High Life to piece together much of what is happening in its plot-line and general situation. That is standard operating procedure for Denis: chronology is scrambled, and the storytelling point-of-view is only loosely allied with the subjective perceptions of Monte as a central character. It has been suggested that Denis, with regular collaborator Jean-Pol Fargeau, employs a unique method for elaborating her scripts: the scattered images come first, and only later the narrative that is deemed necessary to connect them. The result is full of gaps, leaps, mysteries and “free associations” that really make the spectator work to keep up.

Nonetheless, a story – a melodrama, even – does eventually take hold in High Life. This odd cube floating in space (Denis patiently explains in interviews that such a ship would really not need an aerodynamic design) is, in fact, a prison. Its diverse inhabitants (the cast also includes Mia Goth and rapper André Benjamin) have been exiled from planet earth not only in space but also in time – since, in one of the film’s most unnerving details, they send back their daily reports to a “system” that is now far in their intergalactic past, its administrators long dead. Is there anybody out there?

The central drama springs from the rather sinister machinations of Dr. Dibs (Juliette Binoche, very different here than in Denis’ previous and joyous Let the Sunshine In). Both captive and captor in one, Dibs administers daily drugs to the crew and pursues her dark dreams of creating new life. The enigmatic path that takes Dibs from an energetic, solitary session inside the ship’s handy “fuck box” to a less-than-consensual nocturnal encounter with Monte is the “red thread” of this labyrinthine narrative.

High Life is a film that deliberately overturns expectations on virtually every level. Expectations of genre: this is a sci-fi movie almost bereft of technological gadgets, with absolutely no aliens in sight, and precious few glimpses of even stars and planets (the only “cosmic” visions come courtesy of an inspired collaboration between Danish artist Olafur Eliasson and French astrophysicist Aurélien Barrau).

Even on the level of its style, High Life is an unusual project for Denis. Her devotees like to celebrate her typically lyrical camerawork (here the DOP is Yorick Le Saux) and her evident obsession with textures of every kind: the materiality of flesh, objects, places. Yet High Life, despite its images of an on-board garden reminiscent of Andrei Tarkovsky’s classic Solaris (1972), takes a decidedly minimalistic, even flat route. Once a basic colour scheme and an unostentatious production design have been established inside the cube, Denis is content to observe the intimate interactions between the characters, and especially between Monte and Willow, both as a child and – after a sudden, disconcerting jump in time – a teenager (Jessie Ross).

Finally, High Life does not seem – at least on its surface – very much like the taboo-busting films by Denis that I mentioned at the outset. She has declared that she intends it as a blow against our current “puritanical epoch” – still smarting over the attacks she received for Bastards (2013), with its chillingly transgressive exploration of sex and power.

Yet so much of High Life – a few powerful, confronting scenes aside – seems quiet, cool, calm, contemplative, not at all provocative. What’s Denis talking about? For once, the “spoiler” clause of film reviewing is fully justified: the true theme and subject of High Life is kept subterranean throughout, and really only peeks out, suggestively and ambiguously, in its final moments. Let’s just say you should keep an open mind.