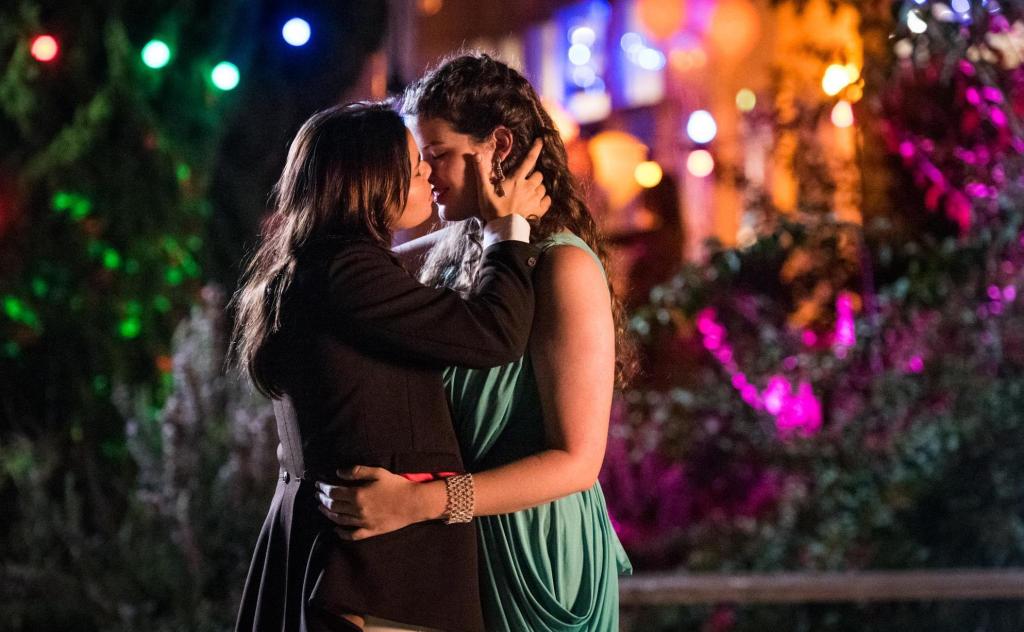 This review was originally published 21 August 2020 but has been refreshed to coincide with the film’s national release on 19 November 2020.

When I was in my first year of high school, I wrote a letter to a boy in the year level above. I don’t think I knew or understood what I was writing, including the connotations of some of the words I used. At the time, I don’t think I was as mortified as I probably ought to have been, perhaps because I hadn’t had enough exposure to queer people and their stories to know that it was probably a very bad idea.

Nothing came of this, but it certainly didn’t take long to realise that I needed to hide that part of myself even if in retrospect it seems obvious. I thought of this as I watched Ellie & Abbie (& Ellie’s Dead Aunt), in which a young queer woman details her own experiences at attempted connection. Things have changed in the 20+ years since I put on a school uniform every day and slicked my hair with an embarrassing amount of gel, just as much had changed from two decades before that. These interesting generational dynamics of LGBTQIA+ life are the core of Monica Zanetti’s comedic coming-of-age film, which screened this week as a part of the Melbourne International Film Festival’s 68½ virtual edition as a program spotlight, its screening reserved to a lone five-hour window.

The feature directing debut of Zanetti, a field producer on ABC’s Tonightly with Tom Ballard, is on the one hand a lesbian coming out story, and on the other, a queer history coming-out story. Ellie (Sophie Hawkshaw) is smart, class president, and has just come out to her mother (Marta Dusseldorp) in a very contemporary matter-of-fact manner, her mother’s stunned silence taken for bigotry. Ellie wants to ask another girl, classmate Abbie (Zoe Terakes), to the formal, but her impromptu admission of her sexuality has prompted something altogether supernatural.

Turns out her lesbian aunt Tara (Julia Billington), who Ellie never knew, has returned in the form of a ghost to offer her newly out niece the queer wisdom that she wasn’t able to pass on. Tara died in the 1980s, and while the film doesn’t try to explain this re-appearance beyond more than one or two lines of goofy exposition, its zippy tone means lingering on that would be unnecessarily churlish.

Zanetti also, blessedly, doesn’t focus on tired fish-out-of-water comedy (although I would have liked to see the ‘80s styling on Tara amplified beyond her rainbow-emblazoned denim jacket, if just for something really visual to fill the frame). So rather than lingering too long on jokes about texting, Uber and k.d lang, Zanetti finds humour in how extremely ordinary it is for Ellie to come out in 2020 and how universally awkward teenage crushes remain. Hawkshaw in particular balances her character wonderfully as a newly out teen girl who doesn’t necessarily fit into any of the prescribed pigeonholes for a youth-targeted coming out narrative.

Zanetti finds humour in how extremely ordinary it is for Ellie to come out in 2020, and how universally awkward teenage crushes remain

But beneath its paranormal fluffiness, there lies something stirring in its fusing of queer generations. LGBTIQ+ folk remain self-educators of their shared history, with stories of Stonewall, Oxford Street and beyond certainly not taught in the classroom by teachers and textbooks. And while it’s fair to guess that most young viewers of Ellie & Abbie won’t have had their own ghostly encounter, by putting the everyday Ellie of 2020 alongside her activist aunt from the ‘80s, it highlights the importance for gay youth to be in touch with the lives that came before, and the extra importance of family and community to LGBTQIA+ individuals.

And when the truth behind Tara’s death comes out, it stings with the understanding that so many queer pioneers of the civil rights movement were not only taken away from us, with lives cut short, but this was often done by perpetrators who were never caught and whom the police of the day had no interest in capturing. Completely coincidental, but the arrest in May 2020 of a man for a 1988 Sydney cold case hate crime murder came to mind, lending the film a poignancy beyond even that which comes from Ellie discovering the queer lineage of her own family. It’s in these passages that Dusseldorp’s casting finally makes sense as she is asked to deliver the truth behind her own apparent misgivings about her daughter’s coming out.

Like another recent Aussie female-centric film, Rosemary Myers’ Girl Asleep, this is an Australian film refreshingly aimed squarely at a teen audience, and it should also appeal to parents. And Zanetti has wisely skirted the ghastlier elements of teen life (basically everything that was shown in SBS’s mini-series The Hunting). Despite this, the brief usage of the c-word will unfortunately likely disqualify it from a more accessible release. Hopefully a streaming release will ensure it reaches its target audience.

…an Australian film refreshingly aimed squarely at a teen audience

In fact, one could easily have seen this emerging out of Australia’s peak high concept teen film era of the 1980s, alongside the likes of Starstruck, One Night Stand, Two Friends, The Big Steal and others. Unfortunately, Australia is a far less visually distinct country now, so it doesn’t have those earlier films’ visual dynamism and distinctly Australian voice. But it’s fusion of queer history with a contemporary coming-of-age story, not to mention its elements of comedy and the supernatural, allows its makers to swerve away from some of the more tired coming out narratives that are still popular (Disney’s new series Love Victor being the most recent).

The film had its world premiere in February as the first Australian feature to open the Mardi Gras Film Festival in its 27-year history. Its recent MIFF window was frustratingly brief, especially as the theatrical market for Australian films like this is hardly booming. I wish, for instance, I’d had the opportunity to recommend it to my day-job office colleagues who are all eager for content to watch with the family in Victorian COVID lockdown. Next stop for the film is WA with Cinefest Oz next week. Hopefully its refreshing take will mean it travels far to international festivals (queer or otherwise) and Zanetti is given the opportunity to make something equally smart and affecting.