Film Review: ‘Babyteeth’ is a complex portrait of youth

This stage play adaptation is a far cry from your typical YA love story, writes Mel Campbell.
Mel Campbell 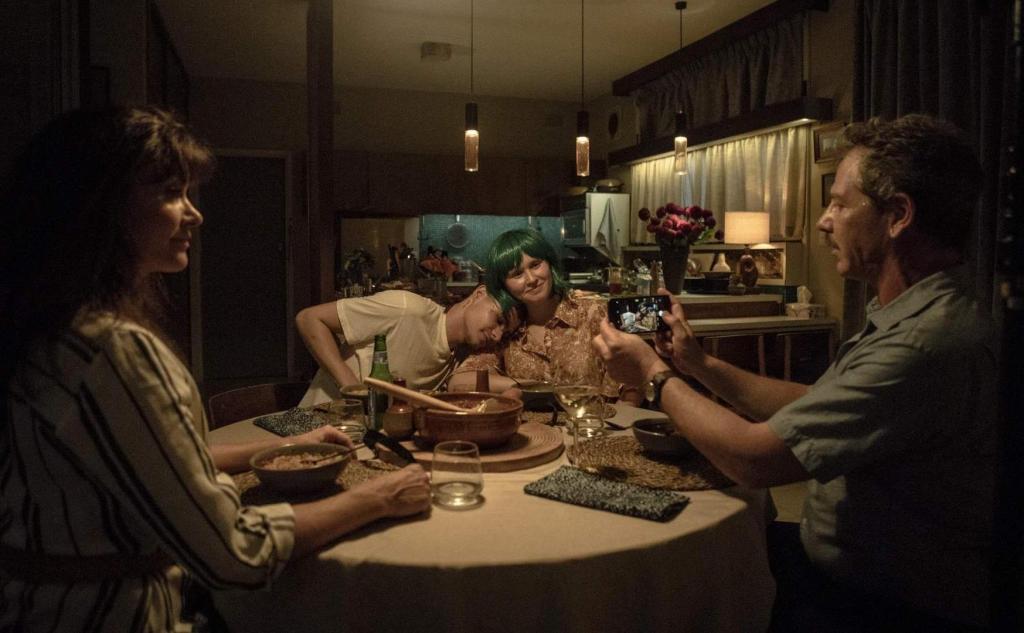 Shannon Murphy’s debut feature, adapted by Rita Kalnejais from her stage play, begins with a strikingly literal motif: a disembodied tooth falling through clear water, trailed by shredded streamers of gum tissue, to a string-quartet arrangement of the Stranglers’ paean to heroin addiction, ‘Golden Brown’. The image frames the transition from childhood to adulthood in abject terms: as a loss, a drifting away. And it hints at an entanglement between the altered states produced by both drugs and music.

The lost baby tooth also evokes parents’ sentimental attachment to their children. They suffered with their teething baby; now, letting that child become an independent person produces another sympathetic pain – one that many parents soothe through fantasy gift-giving rituals.

Milla (Eliza Scanlen) still has one baby tooth that never fell out. Going on 16, she’s a talented violinist and the cosseted only child of psychiatrist Henry (Ben Mendelsohn) and classical pianist Anna (Essie Davis). Milla’s life is as sheltered as the trees growing in the atrium of her family’s chic modernist house – and as she undergoes cancer treatment, it only becomes more insular.

But from the moment we meet her on a train station platform, staring into the void of the tracks, Milla seems alienated, reckless, like she wants someone to give her a push. So when Moses (Toby Wallace) barrels into Milla then swiftly turns to cradle her, unselfconsciously staunching her nosebleed with his shirt, she’s instantly smitten. Moses is 23 and estranged from his own family, surviving on a combination of charm, impulse and cunning. (He’s the feral antithesis of the Bichon Frise show dogs his mum raises.)

When Milla brings him home for dinner, we see Moses as Anna and Henry do: a skeezy, homeless junkie manipulating a wealthy teenager. But as Milla’s illness worsens, and her attachment to Moses only grows more ardent, her parents decide, against their instincts, that if Milla really wants him, they’ll make her fantasy happen.

This isn’t a Romeo and Juliet tale of young lovers from different sides of the track marks. Nor is it one of those saccharine YA weepies about lovelorn teens with life-threatening illnesses.

Indeed, what I enjoyed about Babyteeth is how determinedly it works to undercut familiar genre tropes and to make its characters complex rather than likeable.

I actually laughed at how precisely Moses is calibrated to be the kind of bad-news boyfriend every bourgeois parent hopes their precious darling never meets. He’s tattooed, rat-tailed, physically exuberant and cheekily over-familiar… and then there’s the drug use, the house-breaking and dealing.

But Babyteeth refuses both to demonise Moses as ‘trouble’ and to romanticise him as a transformative bit of rough. Instead, the film dwells in the ambiguity of what Milla might mean to him: a grifting mark; a figure of pity; a fellow rebel; a reminder of the family love he’s lost. Wallace’s performance has a sweetness that reminds you Moses is still very young, too. The best scenes show him just looking at Milla, intrigued and almost scared.

There’s also a subversively ugly edge to Milla’s parents, which Davis and Mendelsohn tease out in performances that are by turns wry, hypocritical and desperately sad. Henry withdraws from his work and family into a flirtation with a pregnant neighbour (Emily Barclay); having given up her own career to raise Milla, Anna buries her future loss in a benzodiazepam twilight, to the bewilderment of her old friend Gidon (Eugene Gilfedder), who’s now Milla’s violin teacher.

Despite her quirky wigs, Milla is a less sanctimonious character than Scanlen’s doomed Beth March in Little Women. She’s naïve and vulgar, thirsty as hell, and the unfairness of her illness plunges her into spiky rage and deep depression. But by structuring the film as a series of vignettes rather than as a linear narrative, Murphy refuses to succumb to the leaden pull of Milla’s fate. Instead, Babyteeth dunks us in Milla’s sensory world: she abandons herself to dance and to violin, and gazes just as avidly at Moses’ body as into the sky. Like her tooth, she’s coming adrift – but it’s a welcome surrender.