Adapted from young adult fan fiction, not much happens in this adolescent love story, yet Adrian Martin finds it weirdly fascinating.
Adrian Martin
[This is archived content and may not display in the originally intended format.] 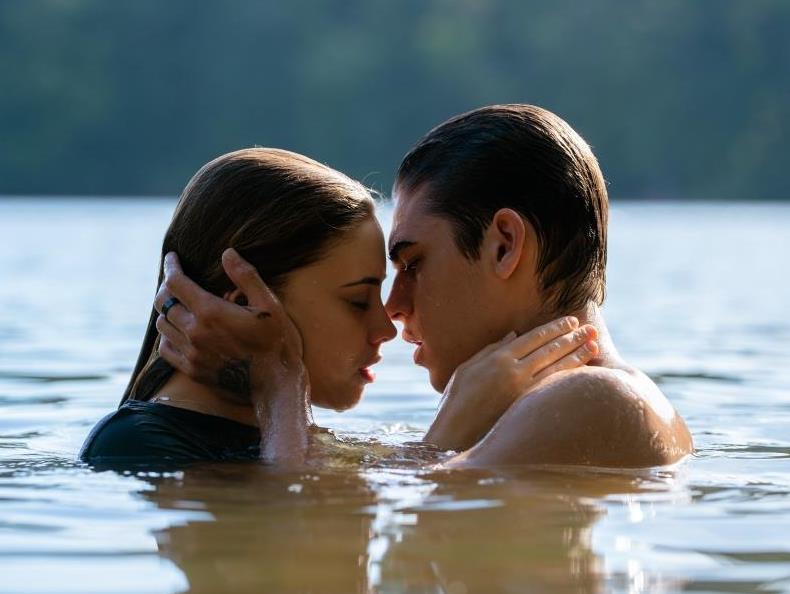 Image: Josephine Langford and Hero Fiennes-Tiffin in After. Source: Roadshow.

Fifteen years ago, an innocuous Hilary Duff teen comedy titled Raise Your Voice taught me something about how films work. It opens with a touch of mystery: Hilary seemingly being stalked and spied on, outside school, through an unseen voyeur’s digital camera lens. However, the moment a new character leaps into frame alongside the star and her pals, a single line of dialogue puts everyone and everything in its proper place: “Hey, my brother shouldn’t be hitting on my best friend!” I realised, in that moment, that mainstream entertainment likes to briefly destabilise us, but always on the proviso that it will re-stabilise the situation as quickly as possible.

After – not a comedy but a more earnest, romantic teen drama – plays the same game, only a bit differently, and more cleverly. As Tessa (Australian Josephine Langford) begins her trip to college, leaving home base, she’s helped and escorted by her mother, Carol (Selma Blair) and a younger guy, Noah (Dylan Arnold). When it’s time for farewells, there’s a chaste but slightly awkward kiss between Noah and Tessa. However, it’s not quite awkward enough to shake my assumption that he is her rather innocent-looking younger brother. As it turns out, my natural (or rather, cultural) assumption is shared by Tessa’s cool new roommate, Steph (Khadjiha Red Thunder). But no, the truth is realigned with a few jolting words of exposition: Noah is in fact her boyfriend, still in high school. There’s clearly an imbalance here that will provide the motor of the plot.

This is not the last time After will play with our moment-to-moment assumptions and expectations. When, for instance, Tessa finds the smouldering Hardin (Hero Fiennes-Tiffin) on Steph’s bed, she guesses they are an item. Not so: Steph’s natural preference turns out to be for women. Nor is the connection that will bind Hardin to his black classmate, Landon (Shane Paul McGhie), evident at first glimpse. Director Jenny Gage – whose main credit, to date, has been on the documentary All This Panic (2016) – has a deft way of exploring the ambiguities and hesitancies of relationships at the most immediate and tactile level: touch, proximity, how people stand or sit in relation to each other in everyday situations. Although Hardin is a pure girl’s-projection object of fantasy (plummy British accent and all!), and Fiennes-Tiffin isn’t allowed to do much with the part, Langford has that indispensable gift which Michael Chekhov endeavoured to impart in his famous acting classes of the 1940s: she radiates from the eyes.

Yet it may be a little premature to hail Gage as a new auteur in the context of After’s unusual production genesis. It hails from a series of novels by Anna Todd (who is not much over 30) that began in 2014: After, After We Collided, After We Fell, After Ever Happy … Even as books, their status is strange: Todd began them as “fan fiction” inspired by the band One Direction (and specifically its singer, Harry Styles) and published in regular intervals on the Wattpad app platform. Eventually taking the reins of her literary career, Todd decided to cut out all the middle-people and self-publish. Then as now, Todd happily exploits a type of collective literary production: she is in constant contact with her readers and fans, and alters her work-in-progress accordingly. Not only that: she’s also willing to rewrite the stuff in later editions – and, in this chain of hyper-production, the film of After (Todd took a very hands-on role in its making) provides one more opportunity for “rewriting”.

As I watched the first half of After, I had the sense that it was positioning itself somewhere between the cinematic genre of the teen movie (Hilary Duff style) and the Young Adult branch of popular literature – although I take due note that Todd herself prefers the term New Adult (which, as far as she is concerned, allows in more of a raunch factor – present in the books, but mostly missing from the film). However, to think in terms of such genres may be almost as old-fashioned a reflex, in this particular case, as looking for a singular auteur behind the camera. After is an ongoing, experimental amalgam pitched weirdly between traditional literature (it’s full of swooning, obsequious references to “the classics”), fan fiction, cinema and a TV series. And, as with any mainstream movie that is hoping to ride a franchise, it was probably “made by committee” rather than a director or even, in this circumstance, a “showrunner” like Todd.

The plot advances so little, by the end, that it seems like we have seen the pilot episode for a TV show. Tessa meets Hardin, sorts out her past attachment with Noah, and basically advances to Square One in what promises to be a serious, long-term relationship. As in much Young/New Adult fiction or film, the presence of secrets, misunderstandings or certain facts not directly conveyed to the heroine provide the tiny amount of dramatic friction necessary for things to move at all.

Otherwise – and this is a popular aspect of Wattpad writing – the film appears to be unfolding in slow motion: every text message, every sentence spoken, is lingered on and hashed over. In this regard, Todd clearly knows and conveys the adolescent sensibility – with its peculiar experience of passing time – very well, indeed. Transporting this kind of drawn-out, infinitesimal tension from the page (print or digital) to the mainstream narrative movie format, however, proves tough for all involved: too much of After is comprised of montages set to a never-ending, at times continuous song playlist.

The passage to Tessa’s loss of virginity – a milestone she didn’t manage to reach with her high school sweetheart – is the occasion for an especially agonising crawl to the finish-line. How many times can she and Hardin be interrupted before accomplishing the (relatively pain-free) act? Even her Mom walks in on them at the wrong moment … But here’s a refreshing twist: for a movie that trades so much in fluffy romantic fantasy, at least Hardin has brought a condom along for the sake of safe sex. Again, our expectations are gently overturned.

The net result of all these moves and negotiations between different media is at once unfamiliar, and extremely familiar. All the usual clichés and stereotypes are there – sexless best male friend for the heroine, a bitchy romantic rival (YouTube sensation Inanna Sarkis as Molly), idylls by a lake, slightly decadent teen parties. An ingredient more in the Not So Young Adult vein of Sex and the City or The Devil Wears Prada makes a tantalising appearance, as Tessa fixes upon literature as a vocation and seeks a position as intern in a publishing house – but that story is merely set up, to be continued in the next instalment.

Above all, there is the enigma of Hardin himself. On the one hand, he is intended as (it is often said by the other characters) the classic Bad Boy who is supposedly irresistible to women – although, in truth, he doesn’t do much that is terribly bad in this film (a few fibs, silences and posturing aside). On the other hand, we are meant to eventually embrace him as the ultimate “sensitive soul” (condom and all), an almost miraculous union of conventional masculine and feminine traits in one hunky body. The very first seconds of the movie explain its title upfront, declared from some (as yet) unclear point in the future: for Tessa, encountering Hardin was the event that changed everything, splitting her life into B.H. (Before Hardin) and A.H. (After Hardin). That’s a pretty enormous build-up for one little love story that is endeavouring to stretch itself as far as it can possibly go. Let’s see if the After series, on screen, can maintain this romantic tension.