Acute Misfortune recreates the relationship between avant-grunge artist Adam Cullen, his biographer and a haunting feast of outrageous lies.
Chris Boyd
[This is archived content and may not display in the originally intended format.] 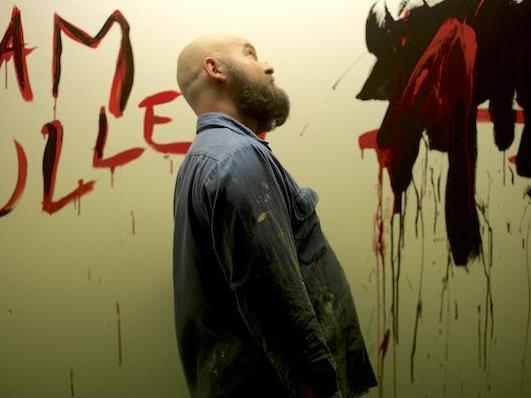 If ever an Australian artist needed a scribe – someone to record his blarney, his bluster and his bons mots – it was the Mad Max of avant-grunge, Mister Adam Cullen. Winner of the 2000 Archibald Prize for his portrait of David Wenham playing Brett in Rowan Woods’ The Boys, Cullen was in his early forties when he found his James Boswell in Erik Jensen, a precocious Sydney Morning Herald journalist.

In early 2008, a few weeks after writing a profile of the artist, the nineteen year-old Jensen was contacted by Cullen with a proposal: write my biography. ‘Thames & Hudson want it. And I’d like you to write it, digger.’ Jensen jumped at the offer. Within the week, he was holed up in Cullen’s spare room.

Like much of Cullen’s life – the stutter he developed from staring at a Goya painting at the age of ten, the hate mail he received after painting one of Anita Cobby’s murderers, the story he told about chauffeuring a hitman to a job – the book commission was just another fabulous lie.

Jensen’s concise and coolly forensic account of the next four years – eventually published in 2014 by Black Inc. – reads like more fabulous lies. Cullen shoots his would-be biographer with a 12 gauge shotgun, pushes him off a speeding motorcycle, pervs on him showering and sleeping, takes him to his heroin dealer and shoots up in Jensen’s bathroom while his family are celebrating the lad’s 21st birthday… meanwhile, the meter in Cullen’s taxi ticks over outside.

While Jensen is transparent in the book – beyond fact-checking, he rarely editorialises – his character is a vital presence on screen. As played by Toby Wallace (Kane in Stan’s small screen adaptation of Romper Stomper), Erik is a diffident and intensely vulnerable young man who allows the older man to soliloquise, at length. He hardly dares ask a question. One, about Adam’s family is instantly shut down. Another, after Adam brags about taking a cattle-prod to an ex girlfriend, is craven: ‘What did she do to make you do that?’

Daniel Henshall’s Adam is extraordinarily menacing: contrary, vindictive and aggressive. This illustration of the vast disparity between the men – between the man and the boy, really – is the movie’s single greatest contribution to Cullen-Jensen lore. Henshall’s Adam is a feral and uncivilized beast compared to Wallace’s Erik, timid and housetrained. One could imagine Adam devouring Erik like Goya’s Saturn chomping on his son.

The screen version fails, however, to convey Adam’s mask swapping, a driving narrative of Jensen’s written account. What comes across as deeply shifty and manipulative off the page, just looks like fairly ordinary socialising on screen. Instead of swapping masks, Adam swaps hats. Or shaves his mutton chops.

Visually, this is a sombre and muted piece with little of the colourful grotesquery of Cullen’s late paintings. It opens with a shot of suburbia, with McMansions rising like houses on a hilly Monopoly board, the long lens compressing them into crowded stacks while leaching colour and contrast from the image. Like Cullen painting rapists – and, indeed, like Jensen painting Cullen with words – the camera lens has no opinion of its subject, good or bad.

In the overlapping second shot, we see a rodeo in slow motion and screened in reverse. (The reverse is a motif of the film, with waves crashing outwards and trains withdrawing from tunnels to little or no semiotic effect.)

The third in the opening trio of shots is an ugly, Blair Witch-style, low-light close-up, shot on DV. Erik is handed Adam’s Bowie knife, pupils big as seal pups’. ‘I’m not an animal, Adam. I’m a journalist.’

The visual ostentation of the opening is quickly abandoned in favour of a no-nonsense and unobtrusive style. (Germain McMicking and Stefan Duscio sharing DOP credits.) Judgements are left for us to make. Indeed, we must phrase our own questions. Do our own digging.

What is Adam’s appeal for Erik? Is it that he has invited the intrusion? (The only time we see Erik on the job for his newspaper, he is probing a grieving mother for her reaction to the accidental gunshot death of her child. ‘Everything she says is like a quote from a daytime soap opera,’ he complains, frustrated, to the staff photographer.)

Is there a sexual frisson between the men? (Erik allows an Adam lookalike – a tradie in hi-viz jacket – to kiss his neck in the dunnies of a bar. Is it out of curiosity? Frustration? Submission?)

Acute Misfortune is a work that plays on the mind long after the cinema curtains have closed. It’s a piece that invites – and handsomely rewards – further consideration.

Screened in Academy ratio (1.375:1) and shot, largely, on a 4:3 format Arri Alexa XT, Acute Misfortune premiered at the Melbourne International Film Festival last winter. It has its national theatrical release this week, from Thursday May 16th.

Three and a half stars