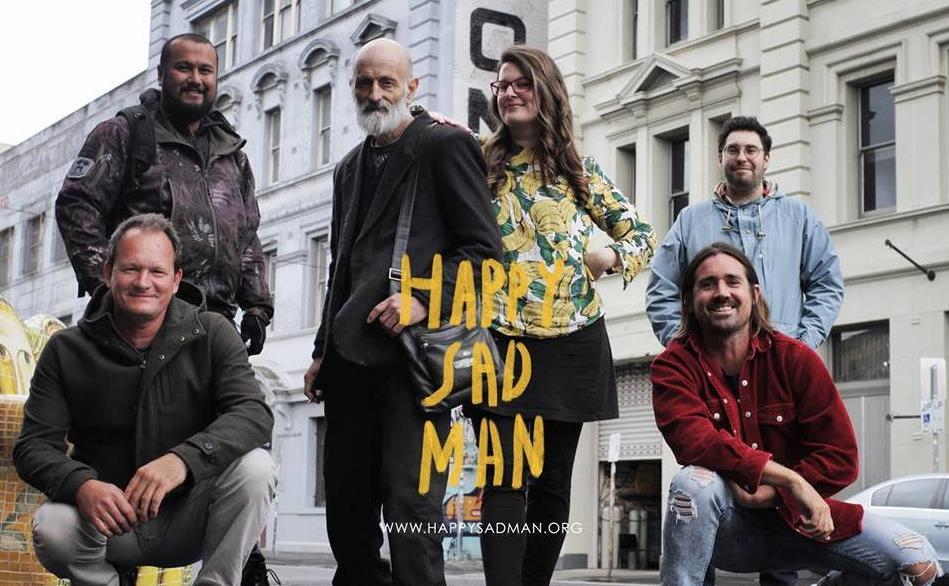 By pure chance, the new Australian documentary Happy Sad Man has come out at the perfect time on the heels of Joker. While Genevieve Bailey’s low-budget doc and Todd Phillips’ slick Gotham comic book adaptation have almost zero in common, what they do share is timely. Love it or loathe it, Joker’s tale of a disenfranchised man who becomes the leader of a movement has become a cultural zeitgeist moment. But while I may not feel Phillips’ movie had anything to actually say on the issue, the cultural discussion around mental health of men has been something that has amplified since it won the top prize at the Venice Film Festival and made over $800 million at the global box office.

And then there is Happy Sad Man, a small – tiny, even – documentary that quietly premiered at 2018’s Adelaide Film Festival. It also placed 7th in the Melbourne International Film Festival’s 2018 audience prize for documentary. A film made with a minuscule team, it is nonetheless unsurprising to hear it speak far tougher truths about the issue of mental health than Joker (but then it’s also not a mega-expensive Hollywood blockbuster).

Bailey’s last feature-length documentary was I Am Eleven, which took a unique glimpse into the optimism and realities of life for those on the cusp of adolescence across the world. Happy Sad Man is far more stripped down than that film; the gloss and sheen of its international trek worn away perhaps by time and reality. The first of Bailey’s Happy Sad Man subjects is John, who lives on the fringes of the outback. The film doesn’t go into the specifics (another wise choice to do away with causation, which is always a minefield) instead it very simply and matter-of-factly says that, yes, he has a mental illness and observes how he goes about his life with it.

The same is said for war photographer Jake, artist and dog lover David, and Bondi surfer Grant. Despite the distance between their lives, they each deal with these same issues and Bailey is wise to come at their lives with equal degrees candour and nonchalance. They are open, but the film doesn’t wallow in suffering. We gain insight into their daily lives, their struggles and also their moments of happiness. The four men are joined by Ivan, who works with men and families to confront the mental health challenges that are increasingly exacerbated by drought and loneliness. His passages were among the most impactful, highlighting the ways men, particularly those of a particular generation, interact and how easy it is for many issues to go unspoken.

Happy Sad Man’s scale will no doubt hurt it with metropolitan audiences. It is filmed on the fly as Bailey engages in conversations and integrates her way through their lives. Its shaky hand-held cinematography often a mere necessity with little in the way of cinematic polish. A musical score by Nick Huggins with vocals by Lisa Mitchell is more satisfying.
However, it is audiences for whom this sort of truth-telling about mental illness is less common who will benefit the most of Bailey’s film. Like other societal issue docs including Taryn Brumfitt’s Embrace and Richard Todd’s Frackman, Happy Sad Man will hopefully be able to find success in targeting rural audiences. Like those two documentaries, people are able to reach out and request a screening, with the film already scheduled for regional cities like Bendigo, Swan Hill, Rosebud, Castlemaine, Mount Victoria and Ballarat with hopefully more to follow.

Outside of a brief visit to a community AFL league, there is not much of a focus on young men. If I felt the film had one major downside, it is this. Likewise, the absence of a more diverse range of men in general. There is still plenty of life in these stories so perhaps a future installment could get at these, particular as the statistics of suicide in young men and men of colour are so daunting and distressing. It would even work particularly well as a web-series that would make it even easier for its message to be accessed. I would be eager to watch if it were adapted into another medium.

But as a conversation starter, Bailey has created something that will hopefully do just that. If Joker is the 600-pound behemoth with a surface-only examination of the issue, then Happy Sad Man is the exact opposite. It has come at just the right time, and hopefully those who need to see it are given the opportunity.