Despite casting qualms, this version is both a beautiful Christmas bonbon and a witty warning against sentimentality.
Mel Campbell 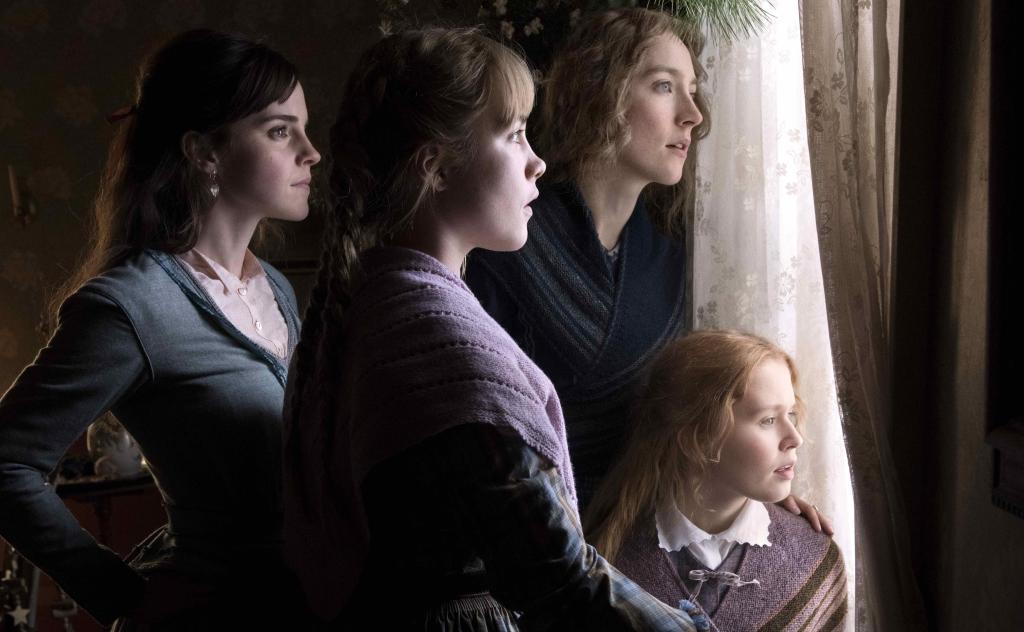 Now, writer-director Greta Gerwig infuses this story with her signature concerns. Feisty Jo (Saoirse Ronan) becomes a familiar kind of Gerwig character: an ambitious self-mythologiser whose confidence in her own imagination doesn’t quite match the expectations of real life. We see her gambolling joyfully down New York streets as Gerwig does in Frances Ha; she talks back pertly to just about everyone; her sisterly friendships are intensely, existentially felt and fought.

But the film’s real innovation is its deconstruction of its source novel. Gerwig’s script wittily establishes its status as metatext through a framing device in which the adult Jo pitches her novel to an avuncular publisher, Mr Dashwood (Tracy Letts, who played Ronan’s father in Gerwig’s Lady Bird). This establishes that we’re seeing a literary version of Jo’s life, which deploys Jo’s girlhood memories strategically to charm an audience.

And this is a very charming film. It’s almost frictionlessly cosy and enjoyable, with a tone that’s tempting to describe as fresh, intuitive and transparent. But Gerwig never lets us forget we’re watching a publishing deal being negotiated. As Mr Dashwood demands the protagonist must marry to provide readers with a satisfyingly happy ending, Jo – and Gerwig – obliges with the famous kiss under the umbrella. And the preposterous attractiveness of Friedrich Bhaer (Louis Garrel) – the stodgy mansplainer for whom Jo ‘settles’ – leaves us in no doubt that fan service is afoot.

Many adaptations of Little Women dwell on the girls’ impoverished childhood when their father (Bob Odenkirk) is away in the Civil War, hence offering the nostalgic and rather preachy message that hardship and separation are character-forming. Gerwig undercuts such sanctimony by refusing to tell the story chronologically. Instead, she dips between the March sisters’ golden past and their bluish-tinged present in a way that emphasises their adulthood, highlighting the bittersweet compromises they make and the way memories can wound as well as console.

The film’s interest in ‘women’, rather than ‘littleness’, is flagged through the rather Pen15 approach of having adult actors play the same roles throughout, using only costumes, hair and makeup to show the passage of time. However, it does undermine the storytelling that all the actors look around the same age. Ronan brings her trademark luminosity to Jo, but others seemed miscast.

In particular, I was slow to realise that in the flashback scenes, the youngest March sister, Amy (husky-voiced Florence Pugh), is meant to be 12 years old; hence I didn’t realise her behaviour is motivated by childish impetuousness, and a yearning to be considered grown-up like her sisters Meg (Emma Watson) and Jo. To me, her actions read as knowingly petty and cruel.

And because Pugh looks much the same throughout, she doesn’t quite sell Amy’s ‘glow-up’ from silly child to poised young woman, which attracts the belated attentions of Laurie (Timothée Chalamet), grandson of the Marches’ rich, sad neighbour Mr Laurence (Chris Cooper). The irritating Chalamet is perfectly cast here as a fickle softboi; while generations of Little Women readers have raged at Jo for rejecting Laurie’s marriage proposal, I felt Jo was right to spurn him – especially as Laurie then appears to settle for Amy, choosing her not for any of her own qualities, but because she’s there.

Meanwhile Meg, the eldest, struggles at the intersection of poverty and gentility, responsibility and romance. She makes her social debut but ultimately marries hot but penniless teacher John Brooke (James Norton). Watson is another weak casting link, never really seeming mature or responsible. And saintly Beth (20-year-old Australian actor Eliza Scanlen) is meant to be 25 when she dies, weakened by scarlet fever; but she’s infantilised to the point where I mistakenly thought she was the youngest sister.

The film finds some of its most astute characterisations among the older generation, whom author-Jo can grant the wisdom of her own adult perspective. Marmee (Laura Dern) is no saint: she’s exasperated and worried, and confides in Jo that she has struggled to master her own wilful nature. Odenkirk’s dry humour makes us understand why his daughters missed him; and Aunt March (Meryl Streep) isn’t a caricatured harridan but a shrewd matriarch whose pragmatism counterbalances her nieces’ idealism.

This isn’t from Little Women; it’s from a later Alcott novel, Rose in Bloom. Gerwig’s project, we can see, is the intertext of Alcott’s entire literary life – and the film warns us not to succumb to sentimental storytelling. Little Women is a beautifully made confection, a Christmas bonbon of a film. It’s far wiser than the tale it tells.