The gentle art of family films is deployed by Steve Worland who wrote Paper Planes and director Owen Trevor who made a lot of Top Gear.
Anthony Morris 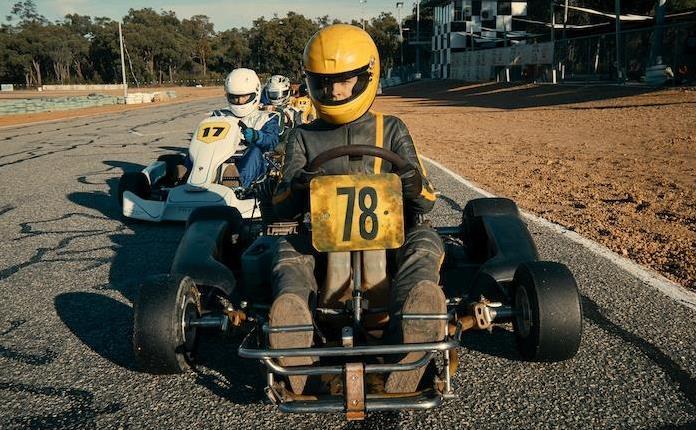 Go! gets a lot of things right, but you probably wouldn’t list originality as one of its strong points. Not that kids movies need to be original – kids don’t become jaded veterans of the entertainment scene until at least ten – but if it turned out the original pitch for Go! was “The Karate Kid but with go-carts”, then… well, there are plenty of worse kids movies to be inspired by.

When Jack (William Lodder) and his single mother Christie (Frances O’Connor) move to a small town in NSW it’s a fresh start for the both of them. She’s opening a produce store, and he gets to leave behind a vaguely sketched-in past that largely seems to have involved getting in trouble for doing burnouts in a carpark. So when out of nowhere he gets invited to a birthday party at the local go-cart track, it’s no real surprise that he turns out to be a natural at racing.

You’d think go-carting might not be the best fit for a former hoon, but Christie is pretty much the least engaged parent ever and so next day Jack is pestering course owner and grumpy old man with a past Patrick (Richard Roxburgh) to let him practise in exchange for helping out. Could the bizarre chores Patrick makes him do secretly be a way of training him up for the physical stresses of go-carting? It’s almost as if we’ve seen this movie before; did I mention that Jack’s rival, blonde bad guy and local go carting star Dean Zeta (Cooper Van Grootel), is revealed to be the brother of frustrated mechanic and obvious love interest Mandy (Anastasia Bampos)?

Australian film has had a script problem for a while now, and the solution from writer Steve Worland (Paper Planes) – put a local spin on a tried and tested collection of much-loved clichés – is a smart one, even if the story is so predictable even the pre-teen kids behind me at my screening were (correctly) pre-guessing the plot twists. It’s not like the film itself doesn’t know this; while it’s thankfully short on meta jokes, the one about Patrick’s inability to make a stirring motivational speech at the film’s most dramatic points is a much appreciated wink to the audience.

Director Owen Trevor sets this retro story in a very retro version of 2020, where all the cars are from the 70s and kids play cassettes in boom boxes in one scene then watch giant flat screen TVs in the next. There’s an interesting range of digital effects used to present Jack’s visions of his dead father, the screen literally glitching as the past intrudes on the present. A slightly less obvious use of technology is the repeated top-down shots of various locations shot via drone, while the go-cart races themselves have a visceral energy that helps sell the idea that on the track is where Jack really feels at home.

It’s the cast that really make this work. The teen trio – with Darius Amarfio Jefferson playing amicable third wheel Colin – have strong chemistry together and feel like a group that’d actually be fun to hang out with. Dan Wyllie is slightly under-used as a local cop but his early scenes are a comedy highlight, and Roxburgh has a lot of fun as the grumpiest man alive (his repeated hurry up mantra of ‘we’re burning sunlight, chop-chop’ gets funnier as the film goes on). The destination with Go! might be obvious, but who cares when the journey is this much fun?

Go! is on wide release in the multiplexes in daytime and 6pm sessions while the arthouse cinemas are running it in the afternoons.