Film: ‘After the Wedding’ is a civilised, grown up melodrama

After the Wedding has a small release but deserves to find an audience which enjoys fine actors subtly hacking each other up with backdrops to die for.
Mel Campbell 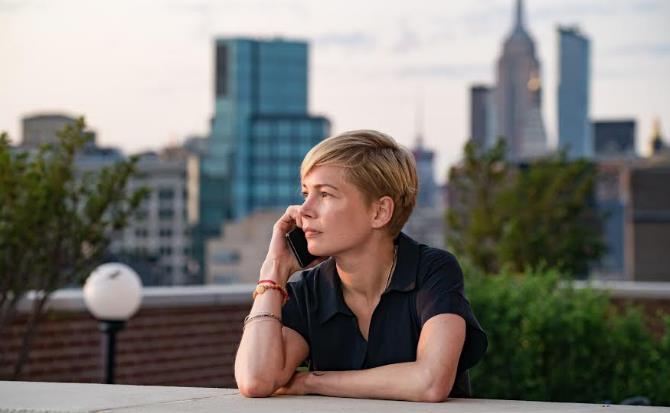 Michelle Williams in After the Wedding. Image: publicity still

My friend Dion has a knack for serendipitous malapropisms, and one of his recent gems is “crest in the nest”. This means that your skills and hard work have gradually earned you a place at the peak of your profession, where you can at last nestle into financial security.

I thought a lot about ‘crest in the nest’ in regard to After the Wedding, a film that returns to bird and nest motifs as symbols of nurturing, change, fragility and protection. It both begins and ends with soaring, birds-eye-view drone shots across a golden Indian landscape; and it emphasises its characters’ affinity with birds, and their need to work towards securing what they hold dear.

After the Wedding is one of those thoroughly inessential yet subtle and well-crafted films made for grown-ups who like sitting back and watching the inner turmoil of other grown-ups. Based quite closely on a 2006 film by Denmark’s queen of grown-up melodrama, Susanne Bier, it stars America’s queen of grown-up melodrama, Julianne Moore, and is written and directed by Moore’s husband Bart Freundlich, whose résumé includes a lot of this kind of thing.

The chief innovation of Freundlich’s film is gender-flipping the key characters. Here, Michelle Williams is Isabel (the character Mads Mikkelsen had portrayed in the Bier film). She’s a professional aid worker who’s devoted to running a cash-strapped orphanage in Kolkata, where she’s become particularly attached to one eight-year-old boy, the bird-loving Jai (Vir Pachisia). When a potential American sponsor demands Isabel travel to New York to receive the donation personally, she reluctantly accepts, vowing to return “with a suitcase full of money”.

That benefactor is Teresa (Moore), a wealthy, confident woman who founded and built her own media placement company. First seen commuting in her car, singing along to Lady Gaga’s ‘The Edge of Glory’ – surely a homage to Moore’s recent glowing performance in another grown-up remake, Gloria Bell – Teresa is equally at home in her chic glass-fronted office and her luxurious upstate home.

And she wants Isabel to feel at home, too, inviting her to the impending wedding of her daughter Grace (Abby Quinn). Begrudgingly, frustrated by the delay in securing the donation, Isabel obliges… only to discover that Teresa’s sculptor husband is Oscar (Billy Crudup), Isabel’s long-ago ex and the father of a child they gave up for adoption. Or did they…?

I wondered if Freundlich had originally intended Moore for the role of Isabel; but the casting works beautifully this way. Freundlich’s gender-flip cuts against the grain of the original film’s paternity twist, but Williams’ powerfully interior performance is essential to preserving the mystery that propels the narrative forward. We want to understand this woman who, on the surface, is quite unlikeable.

First seen blissed out in India, Isabel has a high-strung white saviour vibe; she needs to be gently reminded that the orphanage was there before her, and won’t fall apart when she leaves. In New York, Isabel is brittle and withdrawn. She draws her pashmina shawls around her like furled wings, angrily removes her shoes to stomp off barefoot, and makes yearning phone calls to India from her hotel-terrace eyrie.

Meanwhile, Teresa – the corporate hawk – walks her dog in the woods, where she’s unexpectedly moved to discover a bird’s nest in a fallen tree, containing four blue eggs. It’s a quiet, existential, almost holy scene. She brings the nest home, and reacts with rage when Oscar takes it to use in his art.

It clearly signifies something profound to Teresa… which the film takes its time letting us discover. But my thoughts immediately flew to the protective tenderness Isabel feels for her ‘baby bird’, Jai, and to Teresa’s brooding on what motherhood means now her eldest child has left the nest.

In its first act – that is, until it literally reaches a point after the wedding – this is a taut, intriguing thriller, but the tension slackens as the characters seek to rearrange their ideas about each other. What makes this a challenging film to watch is that they never really concede too much ground. Isabel remains stubborn and fiercely private; Teresa keeps reaching out in a way that feels more coercive than welcoming. Oscar is torn between defensiveness and bewilderment; and Grace vacillates between childish vulnerability and adult resolution, never truly making a decisive leap into maturity.

For these reasons, some viewers may feel that After the Wedding doesn’t ‘earn’ its narrative twists and moments of emotional catharsis. It doesn’t really unpack the political implications of class and cultural imperialism in its premise – instead, Freundlich adopts an atmosphere of languid observation that leaves it up to the viewer to ponder what kinds of care can and should be bought, and who can feel morally superior to whom.

However, it does quietly raise the irony that Teresa, Isabel and Oscar are all grasping for a sense of permanence and legacy: through the children they raise; through the infrastructure they build and the objects they create. They all want to crest in the nest… but like the free-floating camera, they must inevitably fly away.