Cult director Abel Ferrara explores a couple’s final day together before the world ends.
Liza Dezfouli
[This is archived content and may not display in the originally intended format.] 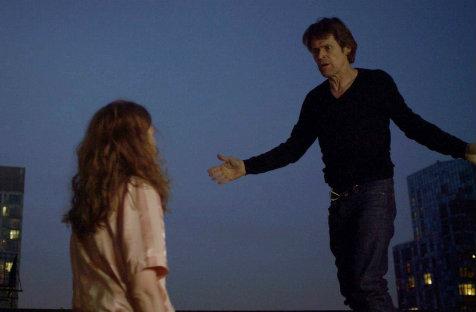 Written and directed by cult director Abel Ferrara, 4:44 Last Day on Earth explores the last hours together of couple Cisco (the much lauded Willem Dafoe) and Skye (the director’s real life girlfriend, Shanyn Leigh). It’s everybody’s last day: the ozone layer is damaged to the extent that life on earth will be extinguished at just after quarter to five in the morning. The film follows Cisco’s point of view as he rages, despairs, has sex, meditates, visits his old dealer, has sex again, filling in his final few hours.

Dafoe brilliantly portrays a sense of feeling alone, as though he is the only one who appreciates the significance, the tragedy, the uselessness of it all. As a symbol of a modern man, Cisco is ordinary, human, an ex-junkie with failed loves, a much-missed daughter. He’s made mistakes. Resigned yet emotional, Dafoe does an excellent job with his range of reactions to the banalities of life, which goes on despite the fact that all will soon end. At one point he yells at a bystander putting a coat over a corpse on the street: ‘Light a candle for him, instead!’

Skye paints obsessively. She changes her clothes, finally settling on a glamorous, obviously expensive gown; she’s not going to get another chance to wear her best dress. She wants Cisco to be fully present with her at the end and angrily prevents him taking heroin. To begin with Skye is a less sympathetic character than Cisco. The film is very much of the man’s perspective: in a conversation via Skype with his ex-partner and mother of his daughter, Cisco says things would have been different between them had his wife been more understanding: of his drug habit and his taking up with a teenager, no less. When Skye overhears this exchange she reacts hysterically, jealous and outraged at a time when you might expect generosity. Naturally Cisco and Skye have a lot of sex. Their bond is threatened at moments but they are together at the end. Again, the director isn’t concerned with challenging any gender traditions: the reading of Skye’s character has her as ultimately the stronger source of emotional comfort.

The setting is a bleak and treeless Manhattan. There are paintings of trees outside and the odd withered pot plant but the lack of nature is obvious. The space is filled with screens; one memorable scene has Cisco cheek to screen in a one-sided dialogue with the Dalai Lama. The best scene features the Vietnamese delivery boy (Trung Nguyen) who shares a dignified moment with the couple, using Cisco’s computer to Skype his family. He leaves the couple with a dignified bow.

How the end has come about is left to the broadcasts – we have been warned, we failed to heed. There are still a few who think that perhaps ‘they’ might be wrong.

The film suggests that, apocalypse notwithstanding, people are people. The end of the world will not make finer creatures of us; there are no great truths to be learnt; impending annihilation won’t make us any the wiser. The news anchors are as false and cheesy as ever in announcing the end and advising everyone to go home to their loved ones. If there is a sense of anti-climax this is the entire point of the film.