You should watch… Ted Lasso on Apple TV+

In the blokey world of football, Ted Lasso offers a different kind of masculinity - and showcases sterotype-busting women too.
George Dunford 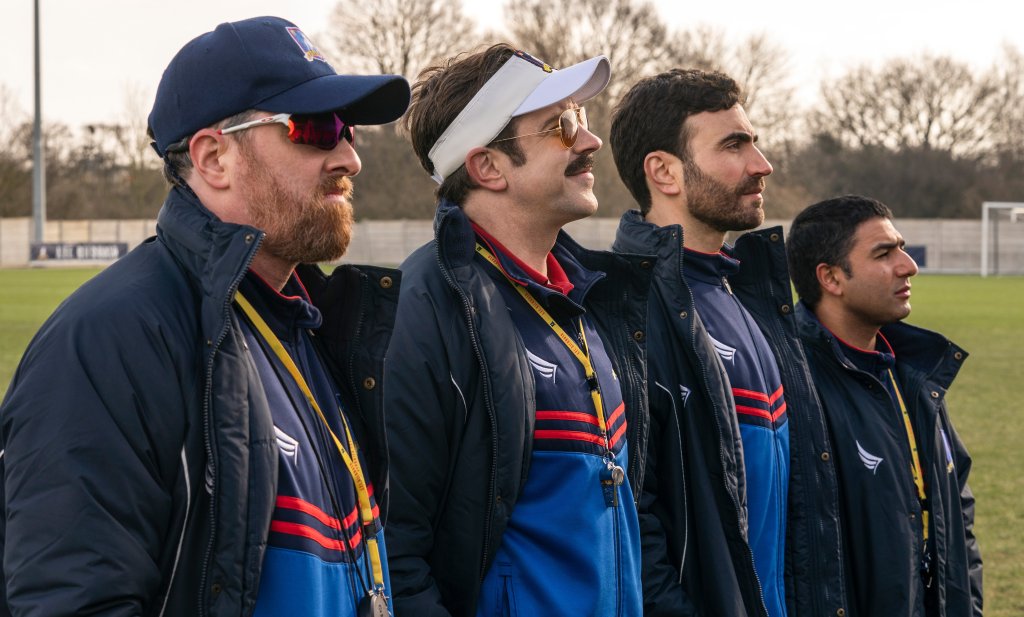 Just like cheap bubblegum, when a sketch is stretched into a movie or a TV series it gets too thin and loses all its flavour from over chewing. That could have been the fate of Ted Lasso, which came from a character Jason Sudeikis developed for webisodes to promote NBC’s sports coverage of the Premier League in 2013. That Ted Lasso is brash, shouty and with a stunning comedic absence of any self awareness. His meditations on what a wanker means include ‘a nice guy, someone who listens… likes to sit with his thoughts’.

So when Apple TV+ threw Sudeikis a series about an American football coach who goes to the UK to coach a soccer team, it could have just been a vehicle for him to drive his ego around and toot his own brash Southern horn. But Sudeikis is smarter than that and built a team to help him develop Ted Lasso into a series that trades the shouting for hugs, the individual brashness for a warm ensemble cast.

Brendan Hunt as Coach Beard comes across from the original NBC promo series with a calm wise balance to Ted’s OTT sloganeering and folksy pep talks. No spoilers but Ted and Beard complement each to near perfect effect (their typical banter comes from breaking up a locker room brawl with Ted saying ‘Coach, tell these boys what the first rule of my fight club is.’ and Beard not missing a beat before saying. ‘No fight club!’ They riff on pop culture (Apple TV+ has a whole playlist devoted to movies referenced in quick fire succession), swap surprise sandwiches and share pints of beer in a male friendship that’s based in support and care for each other.

And it’s those relationships that are at the core of Ted Lasso – we see Nathan (Nick Mohammed) go from being the bullied kit-carrier to ‘Nate the Great’ (Ted’s nickname, of course) and then to becoming ‘The Wonder Kid’ as he grapples with newfound power. And it is Beard who stares him down and reminds him what a wanker really is.

Read: You should watch Physical on Apple TV+

Lest you think Ted Lasso is all about the blokes, the central female characters really are a delight and really are at the centre of the story. Rebecca (Hannah Waddington) begins the series as the newly divorced ‘rich bitch’ owner of the team, but quickly becomes something far more tender and funny. So too Keely’s initial appearance as the WAG influencer expands to show a truly sweet rendition of female power and solidarity. This is a show where men and women can indeed be friends.

There’s a lot of vulnerability at the heart of Ted Lasso. Season 2 introduces a therapist character, the wonderful Doctor Sharon (Sarah Niles) who pierces Ted’s bravado with her patience and persistence to get to the heart of Ted’s issues that lie underneath his fast wit. And Season 2 becomes an exploration of the interiority of characters. While Season 1 was all about character arcs, with Sharon there’s an eye on the failings of our leads and how they can acknowledge them and move on. Season 2’s ‘Headspace’ episode starts to crack into Ted’s nuttiness and get to what’s really behind the man’s mania.

It’s a promising deepening of his character that goes beyond a shouting sketch show. Apple+ are working on making these high-budget shows (Sudeikis is reportedly getting $1 million an episode for Season 3) and drip-feeding them to an audience that is hungry for something that can distinguish itself in the streaming glut. Ted Lasso certainly does distinguish itself, and for all the right reasons.

Ted Lasso is streaming on Apple TV+. At the time of writing there were 4 episodes left to premiere in Season 2.