See What You Made Me Do? SBS tackles Domestic Abuse Crisis 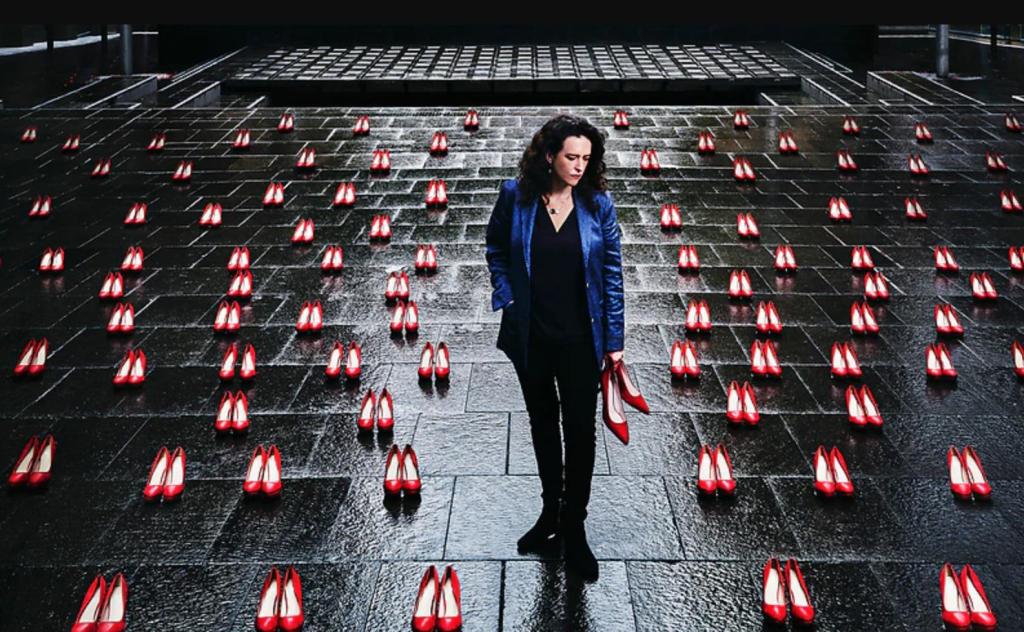 Jess Hill and the empty shoes representing the one woman a week killed by a current or former partner in Australia. Via SBS.

A man’s voice is heard making a call to emergency services. He sounds remarkably calm.

‘I’ve killed my partner. My ex-partner.’

‘I’m pretty sure she’s dead yeah. Yup, she’s not moving at all.’

This is the utterly shocking start of a three-part documentary series premiering from Wednesday May 5 on SBS. Hosted by investigative journalist Jess Hill, it’s built from the concept of her 2020 Stella Award-winning non-fiction book See What You Made Me Do: Power, Control and Domestic Abuse.

We’re told that on average, one woman a week is killed by a current or former partner in Australia. Most Australians who experience domestic abuse will never report it, and their abusers will never be called to account.

Every day another headline screams about a women and her children killed by the man who supposedly once loved them. What’s going on? Why doesn’t she just leave him? Why does he do it? How can we help before it’s too late?

Over three episodes, the series provides deep and challenging insights, especially through firsthand accounts and interviews with those who’ve suffered, those who try to help them, and also, most intriguingly, with the perpetrators facing what they’ve done and sometimes trying to change.

Even WHO magazine calls it ‘One of the most important documentaries you’ll ever watch’ – and they may be right, especially if you’re a young woman starting your romantic life and looking for your fairytale prince.

True crime is a tricky thing to get right, morally. Is it okay to be excited by this content? How can we ensure it’s not just more dead girls for our…. entertainment? True crime must have a real social purpose. Perhaps that’s why presenter Jess Hill seems so emphatically serious. Tears flow as she listens to a mother of young children talk about the risky plan to leave an abusive man in the only free gap she has: while doing the weekly grocery shop.

This is not supposed to be exciting and yet it’s compulsively watchable. We see one young woman, articulate, educated and beautiful, telling her story from first Tinder swipe, to ‘kinky’ text messages, to being choked, controlled and coerced out of her life savings and into a psychiatric ward. Years later she can’t work, can’t go to the shops without a panic attack, can’t have another relationship.

‘Domestic abuse … is still badly misunderstood, and our systems – police, courts, family law – are still a long way from being reliably protective. In fact, too often, they further enable the perpetrator and perpetuate the abuse.’

For me, the most surprising revelation was around ‘coercive control’ and the fact that domestic abuse is not necessarily physically violent, not at first anyway. It often begins with attentiveness, small signs of possessiveness that are interpreted by the victim as ‘being loved too much’.

Romantic ‘love’ is no stranger to the will to power; the desire to control and fully possess the object of one’s affection. Mostly it’s men who murder, but jealous rage, paranoia and emotional coerciveness are part of the human story and of many long term relationships. How can we change this, as a society?

Jess Hill, who is also Consultant Producer on the show, says, ‘Domestic abuse … is still badly misunderstood, and our systems – police, courts, family law – are still a long way from being reliably protective. In fact, too often, they further enable the perpetrator and perpetuate the abuse. With this SBS series, we hope to kickstart more difficult and honest conversations – in our households, police stations, and parliaments.‘

Looby has said in the presser: ‘It has taken over two years to build See What You Made Me Do from a difficult concept to a fully fleshed, sometimes beautiful, sometimes devastating, always important exploration of domestic abuse and coercive control in this country. When making See What You Made Me Do, we wanted the series to be bold and unflinching. It was imperative that we unlock the gates, open the doors and pull up the blinds where abuse hides. We hope this series encourages a national conversation and bold political action, creating an impact which resonates long beyond broadcast.’

May is Domestic and Family Violence Prevention Month and See What You Made Me Do will be accompanied by a range of content across the SBS network exploring domestic abuse. This includes:

See What You Made Me Do premieres 8:30pm Wednesday 5 May on SBS and SBS On Demand. The three-part series continues weekly, and every episode will be simulcast on NITV. It will be also be available to stream on SBS On Demand with subtitles in six languages. It will be available with audio description for blind or vision-impaired audiences.