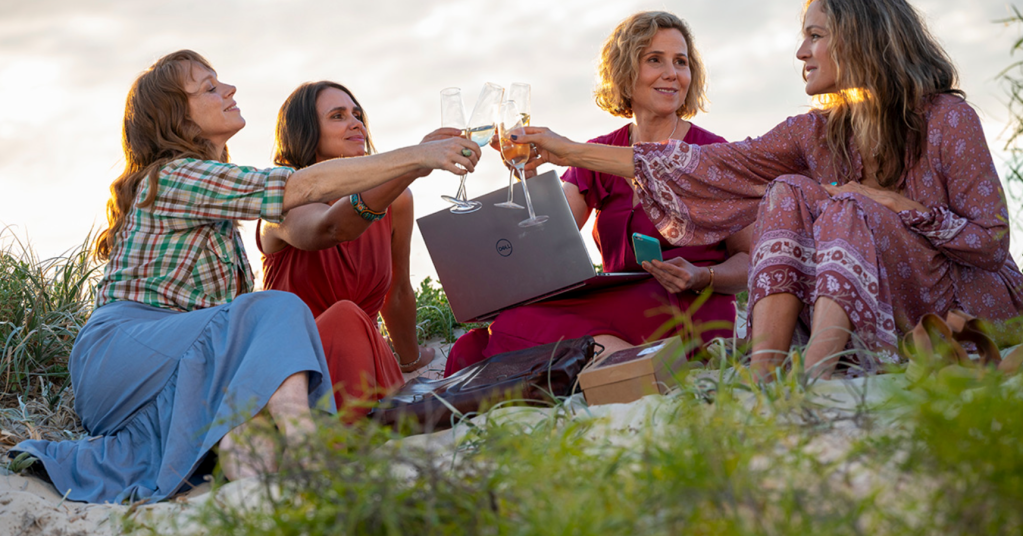 How To Please A Woman, the feature debut of TV director Renee Webster, is a bit of a mixed bag. On one hand, it is a film in which a woman learns to value and communicate her own desires. On the other hand, it is a comedy about sex workers that seems largely uninterested in the realities of sex work. But on a third, metaphor-breaking hand, it is a sex comedy with a nonchalant and celebratory depiction of sex work that never once lets its audience forget the humanity and dignity of everyone involved.

The film is about Gina (Sally Phillips) who is yet to realise just how dissatisfied she is. She eats nothing but strictly portion-controlled diet foods, her husband (Cameron Daddo) seems endlessly distracted from her, and she has just been made redundant from a job at which she was overworked and underappreciated.

In an attempt to wring an opportunity from a crisis, Gina takes over a failing removalist company and diversifies the business, guessing correctly that a lot of women would be thrilled by the sight of a man cleaning their house. A series of misunderstandings has her diversifying the business further, building a company that will clean your house and also clean your house (you can’t see this, but I’m waggling my eyebrows at you).

How To Please A Woman mines misunderstandings and miscommunications to find humour in some reliable places, like the guy who actually just wants his house cleaned or the guy who doesn’t realise he’s activating a Bluetooth-enabled sex toy.

As characters learn to communicate clearly and without innuendo, the film gets to some genuine heart under the bawdy surface. The bulk of Gina’s clients are women who have reached a level of success and stability in their careers but find their lives incomplete. Whether to bring some no-strings-attached intimacy into otherwise disconnected lives or to move past sexual trauma or simply to feel desired, women turn to Gina’s company for someone to polish their benches and polish their benches (I apologise, but I can’t be stopped).

Unfortunately, this focus on the needs of the clients is not just the film’s heart but its major shortcoming. For a comedy that is, on paper, about sex work, How To Please A Woman is much more interested in Gina than her employees.

Only Tom (Alexander England) has a plot that doesn’t depend on Gina’s journey of self-discovery. He’s having trouble holding down a job and even more trouble proving to his pregnant ex-girlfriend that he’s responsible enough to be a father. Anthony (Ryan Johnson) proves to be a liability to Gina’s reputation when it turns out that, despite his confidence, has a lot to learn about housekeeping and housekeeping (that’s the last one, I promise). Steve (Erik Thomson), despite his best intentions, does more harm than good running the business’s IT, and Ben (Josh Thomson) is there in case a scene needs an extra person.

Evidence of the film’s superficial focus is never clearer than when the legal system is involved. Sex work legislation sets the stage for a third-act climactic confrontation, but otherwise does not impact the plot.

Western Australia, where the film is set, has been slower than other Australian states in decriminalising sex work, despite calls from industry experts to do so. Sex workers in WA operate in a legal grey area where they can take clients privately, but can’t work in groups or hire security, measures that would make them safer. Sex workers report that their encounters with the police are often humiliating and demoralising, whether they’re being arrested or trying to report an assault ).

A 2018 study by Curtin University found that Asian sex workers, who make up a significant part of Australia’s sex industry, face particular challenges due to structural racism, isolation, and stigmatisation. The authors of the study write that, overall, participants reported that sex work had a positive impact in their lives but believe they would be safer if the practice were decriminalised.

To be clear, I don’t blame this breezy comedy about self-discovery for not delving into the specific ways that legislation harms and degrades sex workers. What I do question is the need to involve the legal system in the plot at all, especially when that screen time could have been spent getting to know a little more about Gina’s employees.

My hope is that How To Please A Woman represents a positive change in the comedy genre as a whole as more writers find ways to make jokes about sex work that still celebrate the humanity of those in the industry. Until then, this film is perfectly fine, often charming, even if its focus could have been shifted a little.

How to Please a Woman (Madman Films) is in Australian cinemas from 19 May, 2022.