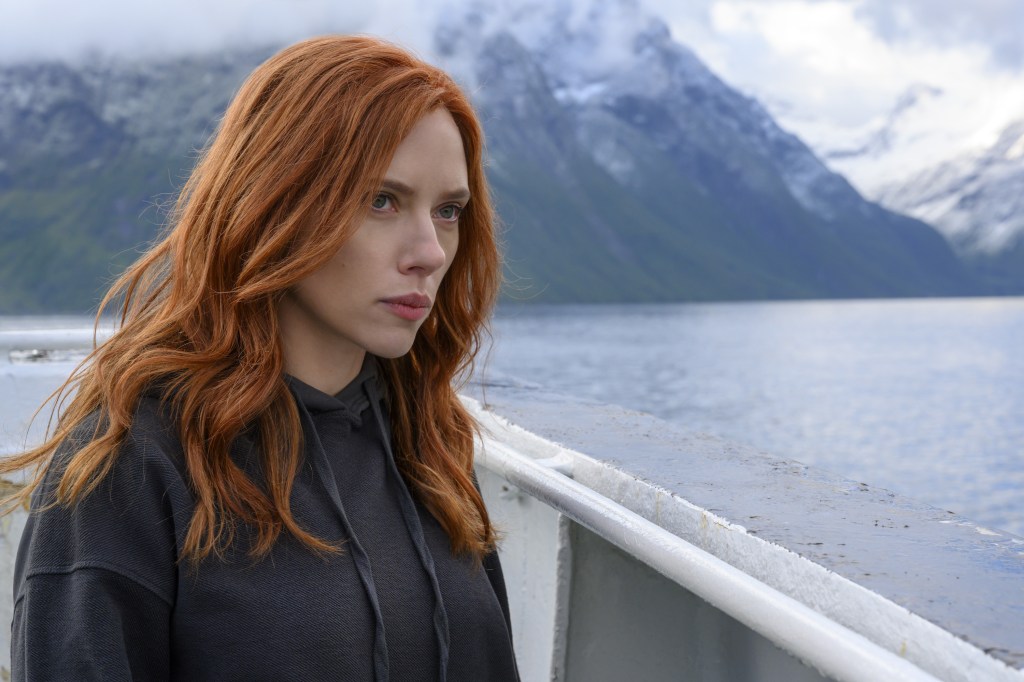 Black Widow in a rare introspective moment for an action hero. Image: Disney

A year late, on an avalanche of advertising, Black Widow opened around the world. In Australia it did what we expected off 260 theatres and 590 screens, and took $7 million at the box office.

In the US it was the latest version of the One Film to Save Us All. A dazzling $80m says Variety, or a less sonorous $107 million in Australian dollars, which we will use from now on. Disney stuck to its cinema/streaming hybrid and admitted to $80 million for its premium home takings around the world at the rate of $40/screening. Not bad value if you cram the family onto the couch, even though it does seem much less whelming in the living room.

It was directed by our very own Cate Shortland; the entire audience for her previous three features would probably fit into one Los Angeles Widow-enthralled multiplex. But she carried herself from micro to macro with aplomb and turned this beast of a film into another chapter in her own fascination with love and family.

Read: Review – Black Widow is the perfect welcome back to Marvel movies

Mind you, it does have a lot more sentiment than screaming so it has a broader audience than normal. American figures suggest that the male audience was actually slightly higher than usual; an indication which pounds the old squalid assumptions about teen boy audiences even further into the dust of history.

A burst of analysis

Deadline went forensic on the comparison between the cinema returns and the streaming figures. How much did the streams erode from the cinema audience?

First we have to compare like with like. That $80 million is a worldwide figure, which has to be compared with the global cinema returns of $212 million.

Between the opening night and Saturday, all these tentpole pics lose audience because they are front-loaded by the genre tragics having a fantastic night out together. Black Panther dropped 41%. Deadline compared this with other Marvel movies and discovered that ‘Captain Marvel eased -14%, Ant-Man also -14%, Black Panther -13%, and Doctor Strange -3.7%.’ So there you have it – a great whack in the guts as the punters paid their premium and stayed home.

Maybe. We still have Covid to encourage nesting, and we can’t forget that the exhibitors are feeling the pain, both in lost tickets and at the candy bar.  But Disney actually makes more money from a couch potato with no-brand popcorn and a Costco drum of ice cream.

And a local meditation

Generally speaking, cinema attendances are slightly better in Australia than in the US, on a per capita basis. If we had the population of the US, our box office for Black Widow would be $105 million. Which is basically identical.

Black Widow is available on Disney+ here as well. But we don’t get the feeling (how scientific is that!) in Australia that the online subscriptions are making much difference compared to other factors like Covid. We are left to wonder if the drop in US figures for Black Widow is really just a unique surge in fan interest on the first day. After all, this is the first proper Marvel movie since Spider-Man: Far From Home came out way back in July of 2019.

The Australian domestic figures contained very high drops this last weekend, -46% for F&F9, -56% for The Hitman’s Wife’s Bodyguard, -40% for In the Heights, and -42% for Cruella. Black Widow has sucked audiences and screens, and the COVID-19 lockdown in Sydney will be cutting into audiences. However, films seem to be falling faster than normal in general, so peak runs are shorter.

The school holidays have also trickled to a close. Life action equine celebration Dream Horse was down 60% to reach $2.53 million, while Dutch animation Little Vampire dropped 55%, and only made $101,000 which must have stung in the StudioCanal office, even though it had a limited run. There goes a good idea for a franchise.

Australian/international film Buckley’s Chance wanted to be a Red Dog of a film but got stuck behind the dingo fence instead. $728,000 in three weeks after a 200 screen launch.

My Name is Gulpilil has taken $394,000 in seven weeks though the bulk of the audience will come from its ABC screenings and iView. We reckon the final figures will be heartening.

Nomadland is still on all of 4 screens after 19 weeks and has taken $4.76 million. The Father can be found in 8 locations and has taken $3.31 million, a tribute to word of mouth about fabulous performances and known greats on the screen. Promising Young Woman lasted 27 weeks to make $4.85 million, though it is now on one single screen which took $585 last week.

Strange Colours, the Alena Lodkina Australian film with an underground reputation for an interesting sensibility was out again on one screen to make $540. She is developing her next film with Arenamedia.