This is your new world, says Minister Fletcher to producers

The game is far from over, but the Minister's speech at Screen Forever 2021 points to a whole new casino for industry funding.
David Tiley 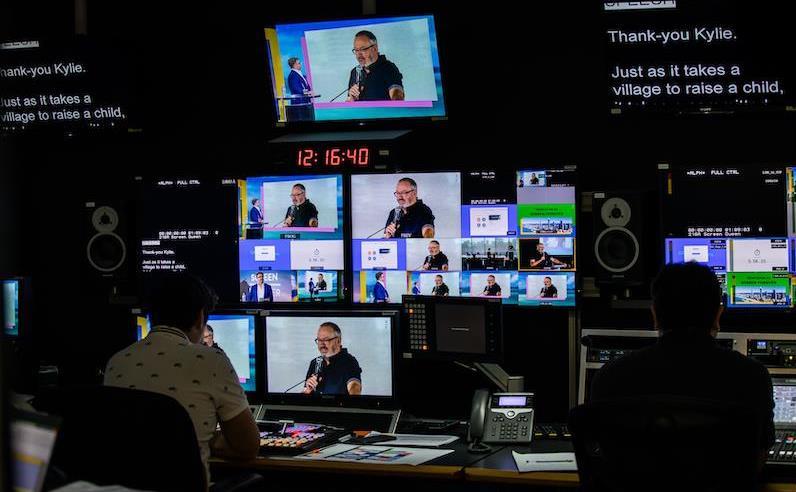 Behind the scenes of a Zoom conference – Day One at Screen Forever. Image: supplied

Day one of Screen Forever, and the afternoon turned very serious with the Zoomed appearance of the Honourable Paul Fletcher, Minister for Communications, Urban Infrastructure, Cities and the Arts.

The government’s role over the last twelve months is seen in terms of Covid (naturally) and his ‘reform’ agenda, which the industry is still trying to digest. Fletcher emphasised the role of federal agencies in setting up the Covid protocols, and providing the ‘$50 million Temporary Interruption Fund administered by Screen Australia to fill the gap insurers would not. To date the scheme has allowed projects with combined production budgets of over $330 million to start or restart.’

He also claimed the $400m to fund the Location Incentive Program until 2026-27 as a ‘once-in-a-century opportunity’ to take advantage of our management of the pandemic.

But his main thrust was about the restructure of the regulatory apparatus. He sees it very much in terms of providing relief to struggling commercial broadcasters. Fletcher’s office is pretty good at seeing the arrival of the streaming players as a dynamic battle to lock in a completely new way of viewing, with dire consequences for our mixed commercial-government model. He notes that the annual decline in audience is around 6%, and that subscription VOD usage is now at 60%.

Fletcher: ‘Only a decade ago, of course, almost all of these people would have consumed the majority of their screen content on free to air television. And those eyeballs, in turn, contributed to high ratings, in turn, revenues of the networks and, in turn, what the networks could pay for quality Australian content.

But this business model has been fundamentally challenged by the arrival of the streaming services with the inevitable flow-on consequences for our screen production sector.’

The government is also deploying what it calls ‘harmonisation’ as a guiding principle. It is almost an aesthetic passion, which values consistency over the granular management of detail.

What is to do be done? The industry is proactive and dynamic, and the regulations should be equally flexible and take advantage of change. From here he gets to removing what his side of politics sees as regulatory and fiscal burdens on Australian businesses.

It is fair to say that the industry tends to see this as the culmination of a forty-year campaign to ‘free’ the commercial broadcasters from any public responsibility. The loss of children’s television leaves a nasty taste.

Fletcher: ‘… we’ve chosen to take decisive action embarking on a significant and multi-year process of industry reform. In September last year I announced that Australia’s screen content regulation would be modernised to address the most acute points of regulatory imbalance.

‘I also announced the injection of an additional $53 million of funding delivered through Screen Australia and the Australian Children’s Television Foundation to support the production of quality Australian drama, documentary and children’s film and television content and to establish a script writing and script development fund.

‘I also announced the harmonising of the producer offset to a uniform 30 per cent for all domestic film and television production along with other complementary amendments to target government support and encourage the creation of screen content.’

On top of this, he points out, the government already provided $439m in traditional funding support through direct investment in Screen Australia, AFTRS and Ausfilm, and the tax offset before the pandemic started.

Fletcher: But when we are seeing the scale of change that we are seeing in this industry we also need to look at the broader regulatory environment within which the screen sector operates. That’s why on 27 November last year I released our government’s media reform green paper. The reforms in this paper are intended to better support the entire Australian media sector and enhance the range and quality of services and content available to all Australians. Our aim is to place the Australian media sector on a more sustainable financial footing, harmonise the media regulatory framework and deliver positive public policy outcomes through the way that we use radio frequency spectrum.

This is a substantial rethink which is much more than our traditional industrial fight. The governments wants a ‘level playing field’, from which it can secure different ways of funding the Australian media sector.

The green paper went further into that process of relaxing the rules for the commercial sector, including Foxtel.

Fletcher: ‘As part of the reform agenda we’re proposing to introduce a new class of commercial television broadcasting licence. The proposal is that this new licence would continue to be subject to the 55 per cent overall Australian content requirement and the new more flexible sub-quota arrangements for children’s drama and documentary content which took effect from 1 January this year. The system would be designed to encourage broadcasters to invest in the content that their audiences want while providing incentives for high-value production.’

In other words, the government is not responding to the industry argument that the new regulatory environments makes the system meaningless. Instead we come back to the idea of harmonisation. Why not apply the system already used on Foxtel which measures income rather than time?

That makes perfect sense in any on demand system because broadcast time is no longer meaningful. It means the government wants to extract money from the system in order to pay for some kind of industry fund and/or production funding by the providers. Like Foxtel, now down to 5% of some revenue.

How to do this? Sell the spectrum currently committed to broadcasting to raise money.

Fletcher: ‘The green paper also sets out proposals which would encourage commercial broadcasters to enter into multiplex sharing arrangements for their radio frequency spectrum. If they were to take up this offer it would allow the spectrum to be used for a range of purposes, but it would also allow the funding of significant new measures supporting the media sector and the screen sector. For example, a proportion of the revenue obtained could fund public policy objectives – public policy initiatives, such as the Create Australia Screen Trust, which would provide support for the continued production of Australian content.’

What about the streaming services to which audiences are turning in such alarming numbers? Two steps:

Fletcher: ‘On 30 September last year I announced that large subscription video on demand services would be required to report to the Australian Communications and Media Authority on their investment in Australian content.’

Then the government proposes a mandatory level. If they ignore that,

Fletcher: ‘If they failed to meet the relevant threshold over a period of time we would introduce a formal regulatory obligation.’

With the reporting requirement the government buys time to learn how to dig the numbers out of companies like Netflix and Disney, to work out the numbers and to ride an international wave of regulation, which has already started. The large streaming services will use that period with its own counter strategies, just like the free-to-air broadcasters.

I have cut to the chase on Fletcher’s speech to illustrate a fundamental problem which is odd for a conservative government. The outcome is much more direct government involvements. Cash is provided to deal with the immediate industry problems, the television rebate goes up by 10%, and the industry applies to a new fund.

That is surely an unintended consequence, and impedes the sector’s ability to make commercial decisions. It also means that the traditional ability to fund drama and childrens’ production on purely local audiences is a dead duck. But producers know that already. The politics now is about getting everyone to go with the same flow.