The re-announcement of the Stan/BBC One series from the producers of Fleabag gives government a chance to tout their boosted location offset.
ScreenHub 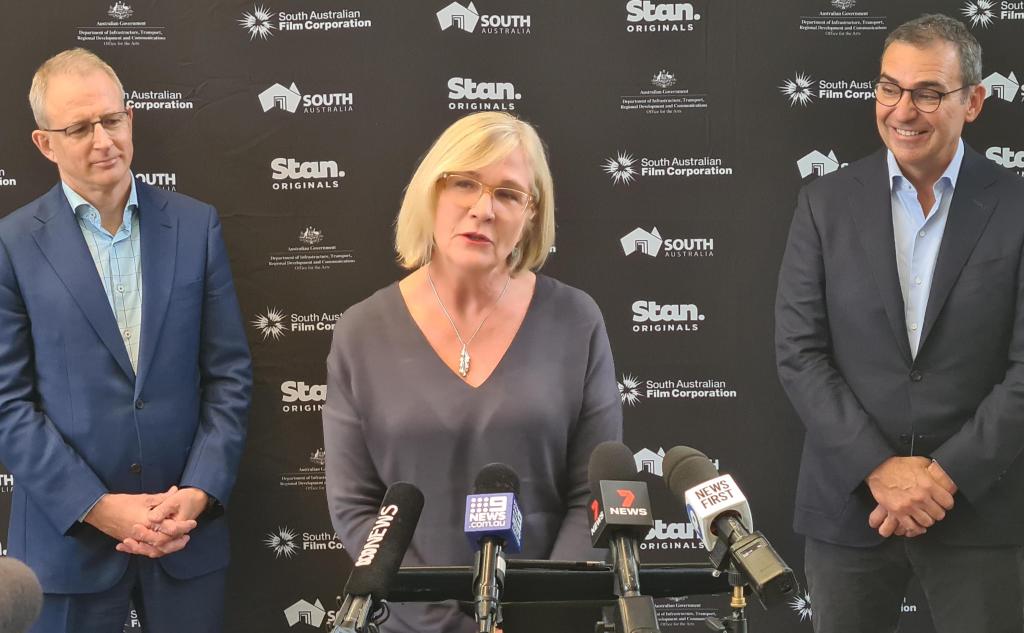 Back in February, Stan and BBC One first announced they were making a new original series in South Australia. The Tourist, from Two Brothers Pictures, the producers of Fleabag, was being made in association with Lisa Scott’s Highview Productions and the South Australian Film Corporation. Production was planned to begin during 2020 but stalled for the usual 2020 kinds of reasons.

On Saturday, a fancy new announcement with lots of $ signs attached to it  was made at the Adelaide Studios by Minister for Communications, Cyber Safety and the Arts, the Hon Paul Fletcher MP, and the Hon Steven Marshall MP, Premier of South Australia.

Filming of the 6-part mystery thriller series is now set to commence in South Australia in autumn 2021, taking place predominantly in regional areas of South Australia, with filming also planned for Adelaide.

According to the announcement, the show will receive $3.6 million in support from the Morrison Government’s Location Incentive program. This announcement was very much a media opportunity, not just for the South Australian production sector, which has been very busy in recent months, but for the Morrison Government to show that screen industry employment is on its radar, and that the recently announced $400 million boost to the Location Incentive is being put to work.

Minister Fletcher said the production was expected to generate more than $25 million in expenditure in Australia.

‘The Tourist is a great opportunity for South Australia – the first Location Incentive production to locate to the state, bringing international attention to South Australia as a world class production destination,’ he said. ‘The production will bring with it a significant level of activity, directly employing more than 270 Australian cast and crew and nearly 850 extras, injecting millions into the South Australian economy.’

South Australian Premier, Steven Marshall said the 17-week shoot of The Tourist would be the biggest television production ever to be made in South Australia and would create over 120 jobs for local cast and crew.

‘The Tourist will inject an estimated $12.1 million into our local economy and provide opportunities to showcase the skills of our local crew here in SA.’

Marshall also commended ‘the extraordinary capability of South Australian Producer Lisa Scott in bringing this international BBC and Stan production to our State.’

The Tourist will be the first production for Lisa Scott’s new company Highview Productions, though her television producing credits are extensive. They include Stan’s upcoming movie A Sunburnt Christmas, and Closer Productions’ The Hunting, as well as Pine Gap, Wolf Creek, Janet King and Anzac Girls.

Scott said, ‘We are delighted to bring this large-scale production to South Australia with the incredible support from the Federal and State Governments. The extraordinary landscape of the Flinders Ranges, which are the lands of the Adnyamathanha people, is some of the oldest country in the world and will be an essential part of The Tourist.’

Minister for Innovation and Skills David Pisoni said the support of the State and Federal Governments was vital in securing this valuable production for South Australia.

The Tourist follows a man who, after losing his memory, is on a quest to unlock the secrets of his identity before those who are trying to kill him catch up with him. The February Stan release gave this synopsis:

In the glowing red heart of the Australian outback, a British man is pursued by a vast tank truck trying to drive him off the road. An epic cat and mouse chase unfolds and the man later wakes in hospital, hurt, but somehow alive. Except he has no idea who he is. With merciless figures from his past pursuing him, The Man’s search for answers propels him through the vast and unforgiving outback.

At its heart however, is a story of self-discovery with a ticking timebomb underneath: as The Man starts to uncover the mystery of who he was, he’s also forced to ask who he is now – and fast. Will he unlock the secrets of his identify before those who are trying to kill him catch up with him? Existential questions sit alongside breathless storytelling, in a very real and very human story that everyone can relate to played out across the almost mythic, landscape of the outback, a modern-day Wild West.

Production Notes: The Tourist is a Two Brothers Pictures (an all3media company) production for the BBC, in association with, Highview Productions, all3media international, the South Australian Film Corporation and Stan. The 6×60 drama has been written by Harry and Jack Williams (Baptiste, The Widow, The Missing), who alongside Christopher Aird (Baptiste, Liar, Cheat) and  Andrew Benson will serve as executive producers, for Two Brothers Pictures and Tommy Bulfin for the BBC. Lisa Scott (A Sunburnt Christmas, The Hunting) will produce and Chris Sweeney (Back To Life, Liar) will direct. International sales will be handled by all3media international.