The Scribe – Graham Freudenberg, shaper of power, poet of ambition

Graham Freudenberg holds high the flag for decent public discourse as we hold our noses in political sludge.
David Tiley
[This is archived content and may not display in the originally intended format.] 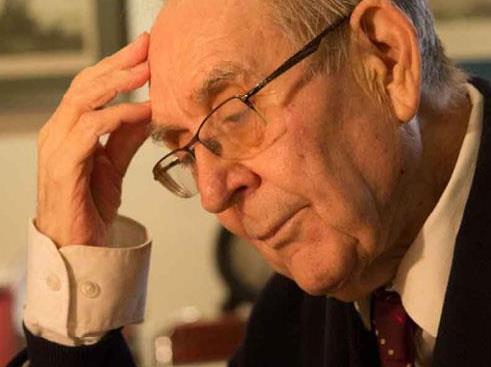 The man who wrote the great political speeches in Australia was not even in the room – he always watched from the solitary shadows in which he worked.

Ruth Cullen’s feature documentary is much more than a trawl through recent politics and its not even a lament for our shabbier present. The Scribe is a real work of art and very challenging to make.

It is about Graham Freudenberg, probably Australia’s greatest speechwriter, who was responsible for some of our most iconic moments, at least since World War 2. He took great politicians seamlessly into the modern microphone and television era. He had a wonderful ability to build the drama and rhetoric around his master’s rhythms and turns of phrase. He was blessed with an era that retained a respect for speechifying in paddocks and echoing halls.

Calwell, Whitlam, Wran and Hawke had hisfre words on their tongues as he wrote more than a thousand speeches over forty years. A drinker for much of this, he talked about small speeches being five can jobs. But the great ones took fifteen cans.

‘Men and women of Australia…’

Unlike the films which wrestle with their sheer scale, this project is based in a single room, with an elderly man who has lived life well. He lives in a normal suburban home with his dog, and does almost nothing but sit in semi darkness with a ball point pen, occasionally writing.

Ruth Cullen made it work. The confinement, the austerity, the focus on abstraction – she embraced it all. ‘It was a deliberate strategy,’ she said on the phone. ‘Part of it was looking for fresh ways to deal with the material. In the interviews he was very, very measured, but he has a great brain. He has done so much and told so many stories – but there are no recordings of the great speeches.’

She researched the film extremely carefully, so she never went on fishing expeditions, or used the interviews to discover primary facts. Fortunately Cullen’s father was an ALP functionary in Canberra so she grew up in the hothouse world of political combat. She already knew Freudenberg and exactly why he is important.

She was alongside him as they took their journey into the past. The first interview was shot three years ago, and she worked in the afternoon in short bursts.

‘It was shot during the day but I wanted to set it at night. It really helps the intimacy and getting into his head, that great conceptual thinking mind of his. He liked to work at night in silence and pools of light, but he never missed a deadline. So the look of the film was deliberate but it could have backfired.

‘Simon Smith did a magnificent job. There is no question about it, with Leo Sullivan on sound and Andrea Lang editing. I was really picking from the top of the pile. The composers Kristin Rule and Jonathan Zwartz did and an excellent job and the designer Julia Goschke did amazing work. Not one person on that team did not excel.’

Despite expensive archive and the extensive visual research produced by Lennie de Vries and Henri Erlich, the film had no broadcaster and no involvement from the Documentary Australia Foundation. Instead she relied on private funding and relished the editorial independence. ‘It was nice to be outside cookie-cutter programming,’ she said.

‘ It was a total pleasure as I was able to concentrate on the film I wanted to make as well as I could. You’ve just got to go for it. I can’t start a film and drop it. Once i knew what it could be I just kept going.

‘It’s a real adventure and if it fires it’s a great medium and form. It’s a real exploration and the crew is hungry for it as well. It’s very timely because we can’t afford to be cynical about politics.

‘We are living in a world of soundbites and forget the argument. We have to listen to the points of view of our peers – even if they are offensive we still have to live together.’

For me this film plunges straight into the dilemmas of public intellectuals in our society. The project is a lovely example of the exquisite craft which is required to communicate with a mass of people – to inspire societies, to move us all around great ideas, to reach for profound ideas in simple ways with homely metaphors.

Here is Gough Whitlam’s policy speech in 1972, penned by Graham Freudenberg in his master’s shadow, becoming his mind, adapting to his pencilled notes, allowing him to set the direction but not the thrust of the moment.

Men and women of Australia.

The decision we will make for our country on 2 December is a choice between the past and the future, between the habits and fears of the past, and the demands and opportunities of the future. There are moments in history when the whole fate and future of nations can be decided by a single decision. For Australia, this is such a time. It’s time for a new team, a new program, a new drive for equality of opportunities: it’s time to create new opportunities for Australians, time for a new vision of what we can achieve in this generation for our nation and the region in which we live. It’s time for a new government – a Labor Government.

We have a hard time matching that vision, even those carefully prosaic ideas. Notice how well Graham Freudenberg takes ugly phrases like ‘equality of opportunities’ and binds them into a visionary flow. It belongs to a different time and we are used to the world it created, but it really did leave the old to rot and the new to sing from the Houses of Parliament.

The Guardian has a good review.

The film screens at the Antenna Documentary Film Festival with a Q&A at the Chauvel in Sydney on Wed 10 October 2018. But it will be around many more times because it is effortless to watch and honours the spoken word.