Television expert Gus Howard attended the sessions about Netflix like an ace detective. Here is his dossier.
Gus Howard
[This is archived content and may not display in the originally intended format.] 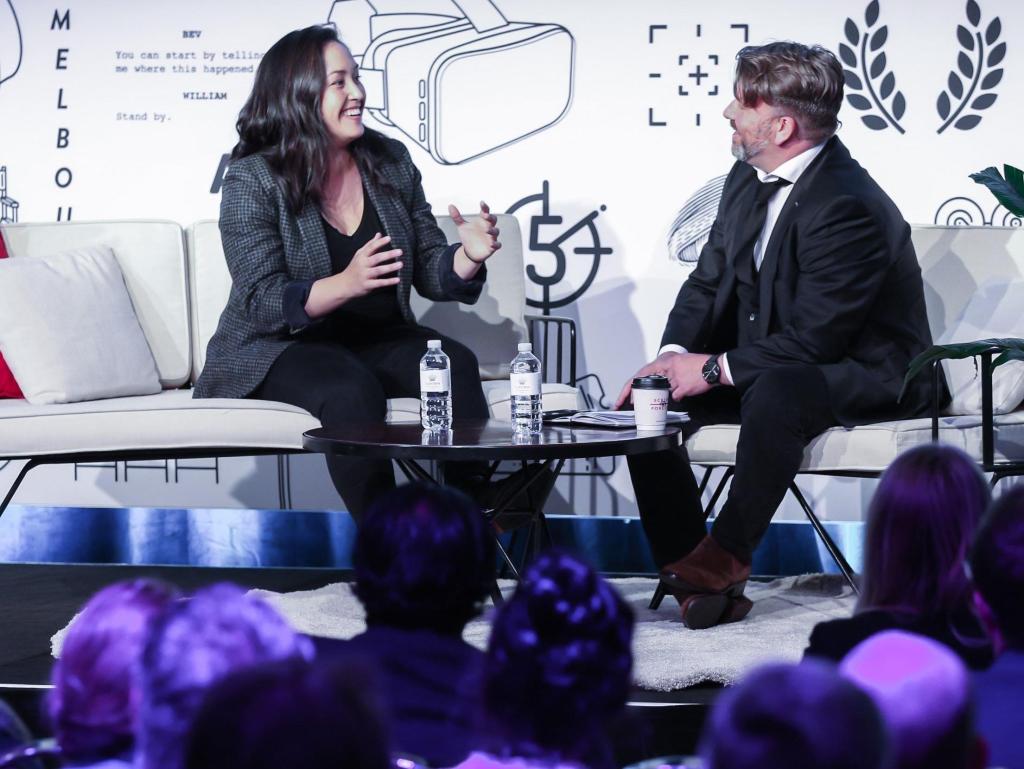 The producers were fluorescent with anticipation for something new. SPA CEO Matthew Deaner and Netflix executive Lauren Smith matched charm with charm. To what avail? Image: SPA.

Netflix content acquirer Lauren Smith was the hottest person on the Screen Forever dance card, because the screening service looks like a potential saviour for so many producers. Smith seems to like and get Australia and Australians and her remit concentrates on commissioning drama.

They’ve had Rake, The Slap, Upper Middle Bogan, Glitch, The Let Down, and have done deals with ABC Commercial for bulk, and played them all over the world. They also have Hannah Gadsby’s Nanette, produced in America, but impossibly Australian in tone. They will keep buying Australian material as long as we keep it good.

Netflix is entrepreneurial so they will change if change is necessary. They now call subscribers members because members have a psychological interaction and are not simply classified as a demographic. Instead they are identified by taste, and the company looks for taste clusters, which are defined by psychographics which means an audience can be made of people from virtually anywhere in the world who have the same tastes. Further, they claim that their programming is not completely algorithm based. They take chances on their own taste and live and die by audience taste.

This is very different from traditional broadcasters who have to identify their audiences in terms of spending habits that are influenced by advertisers. That means their audiences are seen as markets which are implicitly local, so the shows have to appeal to geographic communities.

But a taste cluster can spread around the world and the entire market, in contract terms, becomes rest of world or ROW. This is fresh air for those of us who always dreaded making a show that crossed to Americans but could never have a genuine Australian voice and had to have koalas. We should revel in this, because we are ROW too.

The Australian voice in now simply seen as a human thing, not a confusing thing for Americans, who are gradually becoming an audience segment rather than the audience.  Glitch is not ethnic drama, but a compelling supernatural show pure and simple. Netflix will take indigenous content – it’s all about a good show. Hooray, because we have dealt with that at this end for long enough and survived the process sufficiently well for the self-consciousness of it to be fading.

The reasons for Netflix to commit or re-commit to a show include viewer engagement, marketability of the show, the numbers the show gets when it goes out, and the size of the audience compared to the budget. They initially commit to creators and their voice, like Chris Lilley, as much as to business model producers. They will buy on a screenplay, a pilot or produced content.

After that, they pay what they think a show is worth, so there’s no Australian-style license fee rate card. They have an US$8B budget for acquisitions for programs that will play wherever in the world there is Netflix. But, they often seem to deficit finance so the producer carries the production costs. The money costs go into the budget, which is similar to the way in which we finance the tax offset.

We have no intelligence on whether they have declined to take a show on delivery. There is no ‘success sized’ audience, as long as each show pays its way. Netflix is preparing for the entry of Disney into the SVOD market, but competition could be good fo fees for a while.

What this offered to the room was a door to ROW on terms far surpassing those of theatrical FTA distributors, with a good attitude to creative vocation, themes, flavour of the country of origin, and all that entails – balanced against a possible good pay day and great exposure for future prospects. Possible downsides being the one stop global (probably non-ANZ) deal, and the wait time on the reversal of the license.

The potential to reach a huge audience with a good show is real.

Netflix is very disciplined about its information, notoriously refusing to tell producers about the raw performance of a property, either in toto or by territory. It has a huge amount of data about how it performs, and the pyschographic identity of viewers, but we never know any of this.

So the session was a good summary of the public knowledge but revealed nothing new. However, the next session, called SVOD SUPERPANEL looked at the producer side of the equation, though Netflix resisted the temptation to engage by simply not being there.

The examples were Pine Gap, which was commissioned in Australia by ABC TV and was a co-commission with Netflix and Tidelands, a 100% Netflix show. On the platform were the co-writer and co-producer of Pine Gap, Greg Haddrick, and its director Mat King; a producer of Tidelands, Tracey Robertson; and the CEO’s of Screen Queensland and the South Australian Film Corporation, Tracey Vieira and Courtney Gibson.

A group of producers on the same stage as their principal financiers is hardly going to reveal friction if there ever was any, but the exchange between panellists seemed truly upbeat – why not utilise American money to make a good show better and get broad exposure for it, at the same time as creating a presence as a provider for future purposes.

Netflix fully commissioned Tidelands because the Brisbane production company, Hoodlum, had a presence in LA, and among other things it was a big-story supernatural show, with a previously unseen exotic setting (Queensland) and a sexy intriguing female-led story about half-women, half-sirens. There was no concern about the setting or the accents because the story and script overcame that, and because Netflix looks outside the US, and plays outside the US. ROW thinking.

Netflix became involved in Pine Gap as a co-commissioner because it was too big for the ABC to support usefully enough and the producers needed another well placed partner. So Hoodlum searched for a US cable partner for two full years. The subject was political, and it took a while for Americans to get the outside-US significance of the political story, which was really a base for personal stories about love, loss and conflicted loyalties. It turns out that the intuitions behind the political story were sound as the real world almost seemed to follow the zeitgeist of the story. The mix of Australian and American characters driven by US, Chinese and Australian imperatives made a story that today could play anywhere.

In both cases there was lot of exchange about the look and style and ultimately once the creators had established their vocation, they were given the freedom and the money to execute it. Neither shows had crude tokenism in character presence, or oversold Australians. The positions and mixture of characters were appropriate and acceptable.

After the experience, Greg Haddrick (Pine Gap) would have no problem working 100% with an international SVOD with no Australian input. He feels no need to broaden a show merely for reach – stick with the idea if it’s already good. The director of Pine Gap (Mat King) appreciated the longer shoot time, but the main advantage was to be able to work even harder. All the scripts were delivered at the beginning of pre – another thing (time) money buys. The city based shooting budget was nearly double the usual, but the values were expensive. Same old story, but the result is always good.

The agency people on the panel, Tracey Vieira and Courtney Gibson, were attuned to that demographic/psychographic distinction, which means that SVODs are much less constrained.  A strong but apparently niche idea could find a useful home on another, global, platform and why shouldn’t they? Any subject can be approached, and any territory can be met and new project can be tailored to suit almost any market.

What more could a screen agency want as it tries to support as many blue chip projects as possible? Boldness can be expected and nurtured, and regional shoots can bring to the world the Australia we want seen when we want people to understand the place. What’s the SVOD strategic vision for producers and creators? The term ‘screen agnostic’ came up again. Be that. Commercials don’t matter in this space. Look outward. There are no borders. The number of episodes is not necessarily constrained by finance if the show is worth it. SVODS seem to say how long is the story? That’s the length of the series. There are no ratings periods in SVOD.

The subject of release windows arose too and that is turning out to be benign. A show can be released internationally while the local FTA partner is protected by geoblocking, so shares the release date. The local SVOD release occurs after the first TV release, and may benefit from the publicity and attention.

What is the bridge between Australian FTA’s and global SVODS? The world is changing and the ABC and FTA’s will embrace the possibilities in favour of better budgets, and better developed stories. They may get access to the YouTube kids, who do watch SVOD material, and with the upward shift and expectation of audiences, FTA’s will  go there.

Gus Howard is a veteran producer, mostly in television, whose first public credit was for an educational short in 1981 called Don't Just Stand There Coughing. He was the producer on Blue Heelers from 1996-2006, made the six ep miniseries Rain Shadow, taught the MA program at VCA in producing, and is actively developing and financing new productions.