The future of storytelling is collaborative

Breaking down the barriers between subjects and producers, and empowering communities to control their own stories, the Beyond the Box session at AIDC looked at practical examples.
Rochelle Siemienowicz 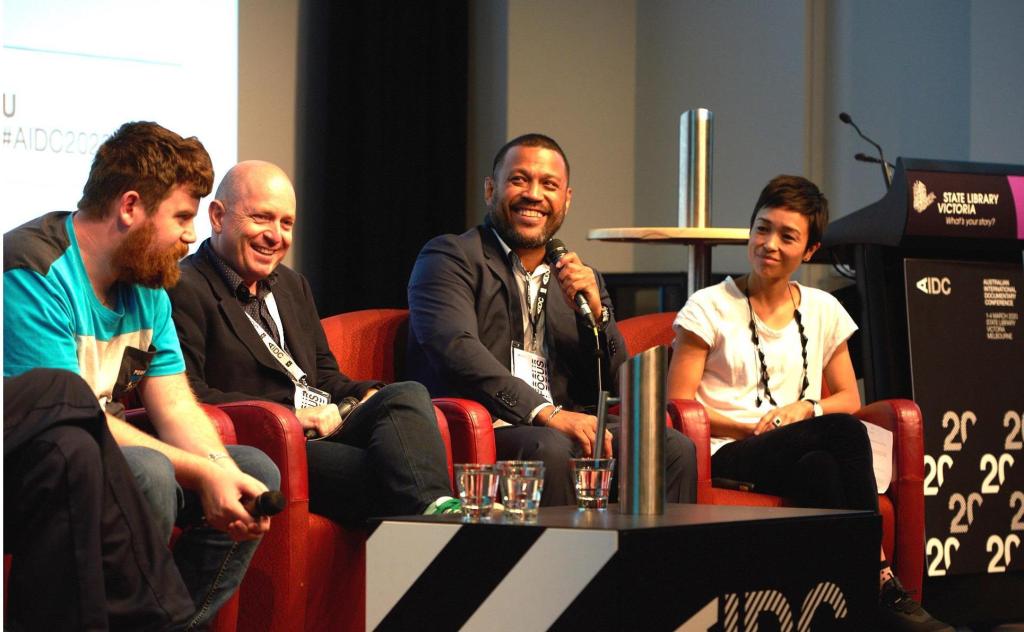 The future of storytelling is almost certainly collaborative, though writing this article in the midst of coronavirus social isolation, it seems such collaboration will be taking place via video link.

But, this AIDC session took place on 3 March in Melbourne, just before the COVID-19 panic hit Australia, with all the participants and audience members physically attending the Village Roadshow Theatrette. Moderated by ACMI CEO Katrina Sedgwick, the panel consisted of Bruce Gladwin and Scott Price from Back-to-Back Theatre, Paul Walton from 720 Creative, actor and producer Aaron Fa’Aoso from Lonestar productions, and Maya Newell, the director of feature documentaries Gayby Baby and In my Blood it Runs.

The session fit perfectly within the AIDC 2020 theme, ‘Collective Intelligence’, and explored three innovative approaches to working together and breaking down old models of control and power.

Back to Back Theatre: performer led collaboration

First up was Bruce Gladwin, the artistic director and co-CEO of the groundbreaking Geelong-based theatre company, Back to Back Theatre, whose core ensemble is made up of six performers all perceived to have intellectual disability. Appearing with Gladwin was ensemble member Scott Price who brings his experience of living on the autism spectrum to his writing and performing. Gladwin and Price spoke of their process in making acclaimed theatre work The Shadow whose Prey the Hunter Becomes.

Gladwin said the show’s starting point was a US documentary film about the exploitation of 32 men with intellectual disabilities, who had been housed and worked in a turkey processing plant in Iowa for 30 years, and were liberated in 2013. They quickly came up against problems in adapting it for stage, including the fact that it was an American story, it wasn’t connected to the performers, and, as Price said, ‘We’re all terrible at American accents’.

Gladwin said that Price had stood up during a ‘disastrous’ rehearsal and given a passionate monologue about what the story was really about, and this changed their direction.  ‘What we realised is that the story needed to come ultimately from the actors, and it was a kind of constant reinvention and re-education for us.’

As a company that tours a lot, they were also going through a marketing exercise at that time, where the marketing person came and sat down with the performers and asked them how they wanted to be described. Gladwin said,  ‘It was this conversation with marketing which ultimately became the first ten minutes of the work that we made – a series of conversations that have been documented and transcribed, and then a theatre work has been created from it. The actors are the co-authors of the work, and also the dramaturgs of the work, and also the performers of the work.’

He said they now hope to rebuild the theatre work as a documentary, which will complete the cycle. Crucial points about this approach include the extensive time allowed and involved in making the work; the fact that they begin without a set outcomes and use improvisation; projects are shaped by the actor’s interests; and there’s a credit and royalty split with the co-author performers.

‘There’s a strong agenda of pursuing mistakes and misunderstandings,’ according to Gladwin. ‘”Wrong” things are often the most interesting.’

And lest you think this is all very ‘2020 diversity 101’, then consider the fact that Back to Back is a company that’s been running for more than 30 years with considerable success.

Strait to the Plate: Working with Torres Strait Islanders

The next case study was SBS and NITV’s Torres Strait Island food show Strait to the Plate, a 5x30min show created by Aaron Fa’aoso’s Lonestar productions, working in a ‘collaborative partnership’ with Paul Walton’s 720 Creative.

Fa’Aoso is an actor and producer from the Torres Strait Islands, now in demand for his work both onscreen and off. His credits include drama The Straits, which he conceived, produced and starred in for Matchbox Pictures, history series Blue Water Empire for ABC, and now with his own production company Lonestar, based in Cairns, the five part travel food show.

Fa’Aaoso said that after making the three-part Indigenous history series Blue Water Empire in the Torres Straits he saw other opportunities ‘to celebrate our language, culture and way of life and how we’re living it, not only through the 10,000 years of existence, but how we’re maintaining it in 2020. Food has been a conduit of the many cultures that have come through the Torres Strait through the pearling boom of the late 1880s, through our relationship with Asia, Polynesia and Europeans.’

Each of the five parts of the series focus on a different island community, showcasing their food and customs, and also the challenges of living in remote communities with rising sea levels.

From the discussion, it sounded incredibly challenging for the producers to get access, permissions and the go-ahead for filming from all of the communities concerned, not to mention the difficulties of making and producing a show in five weeks to deadline from a boat. There were times when they didn’t think they’d get there, but postponing the shoot was not an option due to weather in the region.

There was also ‘sorry time’ to negotiate, when communities were unable to participate due to mourning. It was ‘inconvenient but necessary’ to wait, and as Fa’Aoso said, ‘We got kicked out by a few communities and had to renegotiate.’ Luckily it all worked out in the end.

Also at AIDC 2020: Data journalism – ‘wreaking havoc with data is a much more creative sport’

Walton, who grew up on a small farm in Yorkshire and came to Australia 20 years ago, described himself as a ‘white bald guy’ who felt incredibly lucky to be brought on board to help Fa’Aoso tell his story. He said he hoped that in the future, bald white men wouldn’t be necessary to the process.

He also said that right from the start, it was important they knew who they were making the show for. ‘We’re commonly asked to make something with broad appeal, but with the support of NITV and media ring, we established very early on that this was made specifically for Torres St island, and it was our job as producers to also make it accessible to broader audience.’

He commented that the guiding light going into these kinds of collaborative productions is to keep an open mind and let the material drive the process, and this way of working is in the DNA of networks like NITV, but they’re still networks and they still have deliverables and deadlines.

Walton said the funding bodies, like Screen Queensland in this instance, and the public broadcasters remained key to empowering these kinds of productions to proceed in collaborative ways, while also building sustainable businesses.

In My Blood it Runs: giving back control

The final case study was Maya Newell’s In my Blood it Runs, a model for collaborative documentary filmmaking with the Indigenous communities at its heart having control over the way their story was told. Here at Screenhub we’ve already written about the way this film was made.

Newell said that traditionally documentary was a very extractive model and that she and the other filmmakers were very aware of the politics of representation and wanted to ask: ‘How can we create a model that gives back control and agency to the people whose story we are telling?’

‘We technically started funding the film about four years ago but really the film was built on about a decade of relationships,’ explained Newell, who had been working with Indigenous communities around Alice Springs, making private films with them about culture and land and language. It was here that she met the ten-year-old Dujuan who is at the centre of the film, and he expressed his desire to have a film made about him.

‘So we sat down with all the families that we’ve known for a long time and with those partner organisations who were really significant in the making of this film, and said “How can we make a film that is public for the first time?'”

Newell talked about the protocol document that guided the production of the film. It started with Screen Australia’s protocols for working with Indigenous people, culture and concepts, ‘but also from a long line of history of Aboriginal-led organisations and initiatives around the world that have worked in this way to maintain agency with those on screen. In that sense the model is not innovative, but we drew on the best and expanded it for this particular circumstance.’

Some of these protocols included having consent as an ongoing process, profit sharing, ongoing duty of care to Dujuan and his family, having the edit in Alice Springs so those involved could see it as it evolved. Newell showed a map with the family at the heart of the project, being the core decision makers. She also spoke of having a social impact budget in place even before going into funding.

‘Empowerment and healing are something that happens from being in control of your own story,’ she said. ‘We need to question the rules that we have around authorial control, and the linear models of delivering and funding. We live in this industry that really forwards this idea of the auteur, one individual behind a project. It takes active steps to do things differently and expand creative process.’

The author attended AIDC as their guest.