Jamie Hilton has a viable business making low-budget indy arthouse films. This is how he does it.
David Tiley 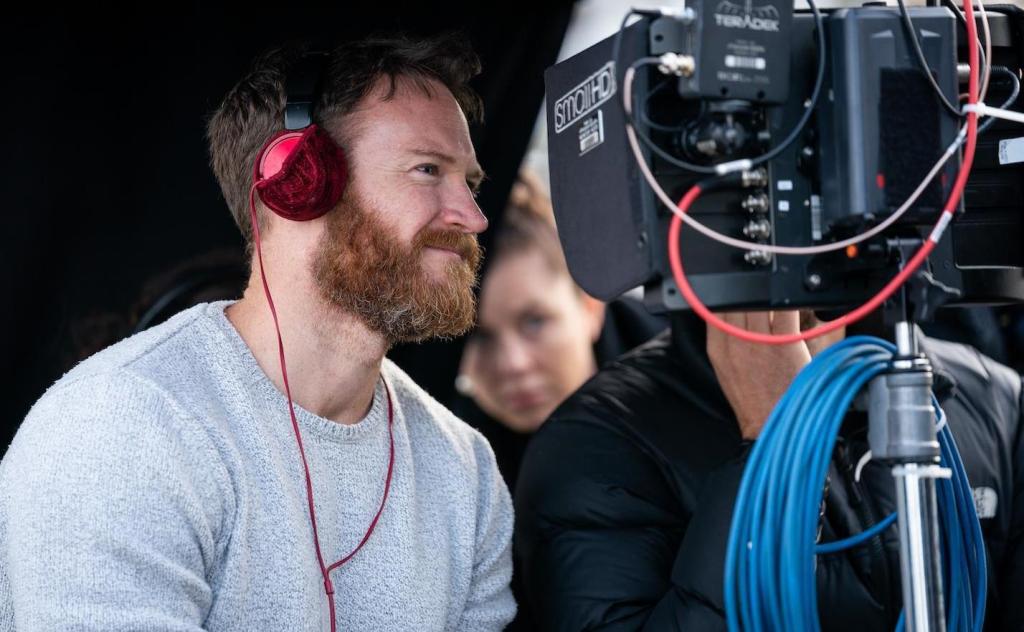 ‘I was given some money for my bar mitzvah, and I went out and bought a camera.’

Fast forward to Jamie Hilton in his first year in the University of Technology Sydney media course.

I thought, “Well maybe I’ll just wait to see what’s next,” and they said, “Who wants to be the producer?” Myself and two other people put up their hand.’

All three are still in the industry. Jamie Hilton ultimately made over a hundred music clips before setting up See Pictures with Michael Pontin and Isabel Staniford, who started with them as an intern. He produced his first feature at the age of 29.

Based in Sydney, See Pictures has a significant production slate, starting with Claire McCarthy’s Waiting City and executive production on Sleeping Beauty from Julia Leigh and Jessica Brentnall, until Hilton connected with Josh Lawson to make Little Deaths, leading to their second project together Long Story Short, which has just launched into Australian cinemas.

It is an unusual film. As Hilton acknowledges, Lawson’s sense of comedy is different from broad Australian humour, while his wordy dialogue relies on the technical expertise of his cast. It is a moral fable, in which a supernatural device allows a character to contemplate their lives, to skip through time with an opportunity for redemption. The conceits go back to the Bible while Dickens used a version in A Christmas Carol, followed by Capra in It’s a Wonderful Life, and even Adam Sandler in Click.

We are not used to overt moralising, to a convention which steps sideways from realism to disturb an audience with ideas and the great arc of a human life. Sermons are not us, and the film uses comedy to engage the audience with characters and skip through time.

Read: Ones to watch 2020: Twelve emerging producers you need to know about

Jamie Hilton is determined not to repeat himself, and ultimately concluded that he will commit to talent in a huge variety of genres.

See Films has worked on pictures with traditional budgets at around the $10m mark. Hilton became involved with veteran Al Clark in Stephan Elliott’s Swinging Safari, though he describes himself basically as an extra pair of hands. He was also a producer on the Western Australian coming of age film Breath, directed by Simon Baker and written by Baker and Gerard Lee from the Tim Winton novel.

But Hilton and See also work with a much more interesting model, which underpins most of their films, including Long Story Short.

With government soft funding, he explained, ‘You need around half a million dollars to put a $2 or $3 million project together. And at that level you can afford to take risks and sell the filmmaker or the script or the concept. Then you have a little more freedom with your storytelling. Perhaps that is what helps filmmakers retain a level of authority and consistency across a piece – there’s not too many noisy voices who are trying to recoup all their money in the process.’

To finance projects he does not need to rely on marquee names in the cast. On Long Story Short, they brought Rafe Spall in from the UK, on minimum wages because he wanted the opportunity. Ronny Chieng came back from the US and his trans-Pacific career. Noni Hazlehurst was an obvious gift for her role, while Jamaican-Australian Zahra Newman is completely electric. Hilton was awed by their professionalism, which has a lot to do with their theatrical training.

The shoots are very disciplined. Principle photography takes twenty days, they work with excellent heads of department, pay industry minimums, avoid overtime like the plague, and are distressed by pickups. See produces directors who understand flexibility and compromise, which is relatively easy with relationship dramas and comedy.

Hilton also works with a number of students or emerging talent, to provide a foothold in a disciplined environment with excellent role models. In this Sydney shoot, he involved people from Bus Stop Films which specialises in training people with disabilities.

The model is about more than money, or even the freedom to be daring. ‘People engage with those smaller movies because they love them – not just audiences but also all of the participants, all of the casts and every crew member who is getting paid industry award minimums. They give their time and energy and often pass up work which would pay them more handsomely, so that that also creates a magic and a passion.

‘And, it’s this quality that that ultimately brings buyers and then audiences to the story.’

It is very difficult to pre-sell small indy films but Long Story Short turned out to be an exception.

‘We had an excellent sales company,’ Hilton explained. ‘We didn’t presell but we financed the picture with a very small advance against foreign sales and Australian distribution rights. And they were able to secure a whole bunch of sales before we shot the film. Just before we even had a poster, just on the strength of the script so that was encouraging and their team have done a wonderful job in sales.’

‘I went to StudioCanal asking them for a very small amount of money compared to the output deals that I know they already have. Their risk is really mitigated.’

He is trying to cut across that rule in which advertising defines scale. ‘It’s been a humble spend for a very sizeable PR campaign. The Covid environment makes it incredibly challenging to date movies and predict which cinemas will be open. Just last week we went into lockdown in Perth where I live. There’s only 120 people allowed in a whole complex of cinemas.’

Paradoxically Covid has created a drought of titles so Long Story Short will go out very wide. ‘There is room on the screen for an indie Australian comedy and we’ve had really, really wonderful exhibitor support.’

Hilton is on the edge of his seat. ’It’s really exciting to see how audiences respond. I have no idea how we’re going to go in this one, I really don’t.’

The fly in the ointment

Generally speaking, these films do not make money in Australia. Even the larger films with decent advertising budgets go flat. ‘Roadshow does take really significant P&A risk on their Australian stories. They’ve just paid off really well with Penguin Bloom and The Dry. They put serious money into Go Karts, which is a See production and didn’t connect to the cinemas, and they put serious money into Breath, which didn’t connect as well as The Dry but it definitely connected with audiences.’

At the $2-3m budget level, See can exhibit here and take the film to premium overseas festivals. ‘Little Death, and 1% are both excellent examples of films that we we finished, we got into Toronto, and then we showed them around, and we had multiple sales companies wanting to represent them, which meant that we had really passionate sales people who loved them, who loved the movie and wanted to help launch it.’

And that is the simple secret behind low budget films in the arthouse space. The producers are still deep in a commercial mindset. As Hilton says, ‘Just because there’s cultural funding does not mean it shouldn’t be commercial in the sense that it’s made appropriately for its potential audience.

‘Profit is a funny word in the film industry because a profit means the recoupment of the principal budget of the picture. Whereas, if we have a bunch of grant finance or rebate finance coming into the film, you can start receiving income pretty close to the first dollar of income.

‘If you can make the film for as little as possible, and maintain a sort of as close to a first dollar gross recruitment position as possible on those films, then you will get paid something and if the movies really hit you can get paid really considerably.’

This approach only works if you can deliver a cultural dividend, because the government is the largest provider of the money, and is not sharing in returns until the risk-taking producers, creative principals and crew have received their cut.

In a normal budget, of course, all those payments would have been paid out at the time, so this arrangements makes little material difference to the funding agencies. The cultural dividend is about international audiences, including streaming sales, and the opportunities for the makers to grow. Jamie Hilton reckons he has started a lot of good careers. Claire McCarthy, for instance, who was a visual artist who entered the film world with Waiting City is doing just fine in the US.

The strategy must also be seen in the larger industrial context – screen creators need conventional incomes to underpin the risks on Indy productions. it is essentially a symbiotic relationship.

I asked Jamie Hilton what will happen once the rebate drops from 40% to 30%.

’It’s up to us as producers to work with what we’ve got. 30% offset isn’t bad and we know we’ve got to get marketplace money, but it is certainly not helping.

‘This will essentially cease to make it cost effective to do this reinvestment model which we’ve been doing for the smaller films. So films like 1%, or Long Story Short, will not be made.’