Sydney Film Festival tries for some modest evolution to get some joy from a crappy year with a summer weekend of films at the State Theatre.
David Tiley 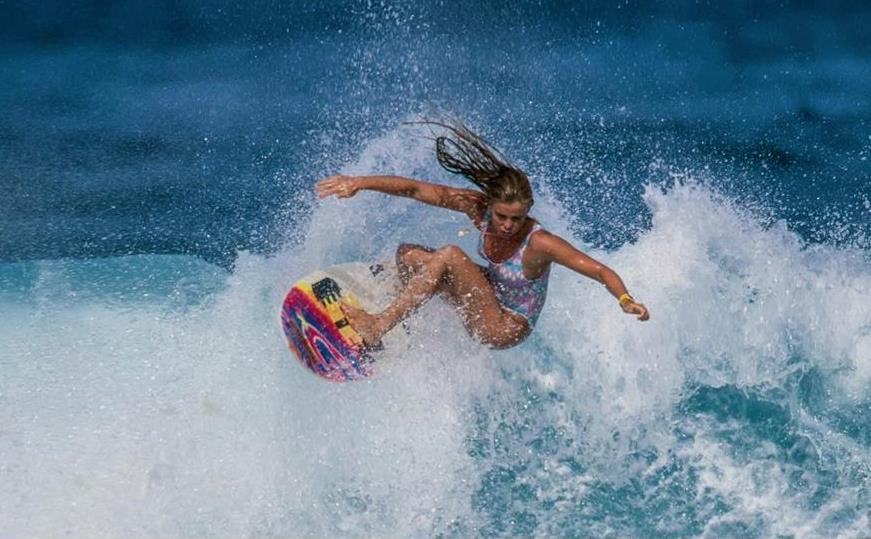 Let’s face it, a film festival in summer calls to our inner sybarite. Especially in Sydney. Image: Girls Can’t Surf via Screen Australia.

While the production sector has been adapting to rigid scientific rules and working out how to deal with insurance, the exhibition and broadcast sector issues are really fluid. We’ve been following the festival movement because COVID-19 has brought it into the 21st century.

In a year’s time, it could be much more useful to screen creators as it becomes an international spider web of relationships and discoveries. Look behind the art to the resources, and we may be seeing the evolution of a whole new market.

The Sydney Film Festival is adroit at sharing discussions about change. CEO Leigh Small and Artistic Director Nashen Moodley bring a really wide range of experience which gives them an expansive cultural point of view.

At the moment, Moodley is promoting a modest weekend festival as a piece of the Sydney Festival in January 2021, which will be the first time the festival occupies the State Cinema in its home town since June 2019.

The My Cinema My Festival program is a extension of the travelling film festival concept which has operated since 1974. It takes advantage of the way in which audiences have better access to niche programs through streaming. It starts on November 19, and is now reaching over twenty cinemas. This particular version started with Independent Cinemas Australia, the trade association, and the films are selected from a Sydney Film Festival List by the local exhibitors.

‘Ultimately we are supporting cinemas and helping them to prosper, because we understand that the future of film festivals is extremely linked with the future of cinemas.’

‘I think it shows there really a desire to see films that are not easily available,’ said Moodley. ‘Hopefully we can continue with it, to have a presence outside the 12 days of the festival. Ultimately we are supporting cinemas and helping them to prosper, because we understand that the future of film festivals is extremely linked with the future of cinemas.’

While this was evolving, the film festival was approached by the wider Sydney Festival, which was crimped by COVID and had decided to focus on Australia. This time round, for the first time, the arts festival wanted input from the film tragics.

‘We had a meeting a month ago now, and we were excited without knowing precisely what we could do. It took quite some time to work it out,’ Moodley explained.

The problem of delay

The idea flourished once it clicked into a problem for the film festival. These days, festivals are very conscious of linking to both local audiences and local screen makers. They are less a visit from world culture and much more a conversation with global visions. Films which Sydney really wanted to promote were stuck on the shelf – at best they could run limited seasons in picture houses without a substantial marketing platform.

Firestarter – The Story of Bangarra, directed by Wayne Blair and Neil Minchin, produced by Ivan O’Mahoney was a key film that was never given its full due in its home town. Now it could be shown in an arts context, among the dance lovers who have supported the company from the beginning. High Ground, from the Bunya team, directed by Stephen Maxwell Johnson and written by Chris Anastassiades with a powerful Sydney cast, blasted off in Berlin, and had a lot of love at both the Adelaide and Brisbane Film Festivals. But Moodley wanted to give it a glow for NSW as well, before its 2021 release.

And the documentary Girls Can’t Surf is pure Australian beach. From Michaela Perske as producer, Julie-Anne De Ruvo as co-writer, and Christopher Nelius as co-writer, director and co-producer, it tells the ‘The awesome true story of the rebellious female surfers, from Australia and beyond, who took on the male-dominated professional surfing world in a fight for recognition and equality.’

Who wouldn’t want that to lift the rafters at the State Cinema?

On top of this, the program is filled out with Minari and Another Round, both accessible international films with great pre-COVID festival buzz.

So the Sydney Film Festival is linked more strongly with the key wide arts festival, and provides a valuable way to springboard films that will delight audiences, if they can get enough attention. They are also culturally important and part of that wider drive to interrogate our society against the pressure of the culture wars.

Hints of the future

According to Moodley, we can see these changes around the world. ‘All our usual activities were disrupted, but it is quite amazing how very quickly festivals have come up with a variety of plans and things to ensure that films are shared with people, and I’m really, really proud of what our festival and so many festivals around the world are doing.  I think it’s quite inspiring.’

Rights holders are becoming more flexible, though each film is still negotiated independently and there is no uniform model. Fortunately festivals tend to work with the same companies year after year and are generally able to satisfy them about the risk of piracy. After all, exhibitors are facing chaos, losing films, closing physically, and facing competition from streamers; this reinforces the value of festivals as allies in the search for markets and buzz.

‘And the fundamentals of playing a film festival still work,’ said Moodley. ‘I think there will be a lot of publicity for these films because they are part of the festival’s summer season, part of the city festival, so I think this is a good boost. ‘

Behind it all, festivals are sidling up to a new way of working. As the rhythm of streaming speeds up and the market gets more crowded, they can think about deliberate red carpet premiere events as they become necessary, rather than once a year. And the festival world looks more and more like a collaborative circuit, which can work directly to provide income to rights holders and promote films to both cinemas and streamers.

The Sydney Film Festival Summer Season runs from 15-17 January 2021 at the State Theatre.