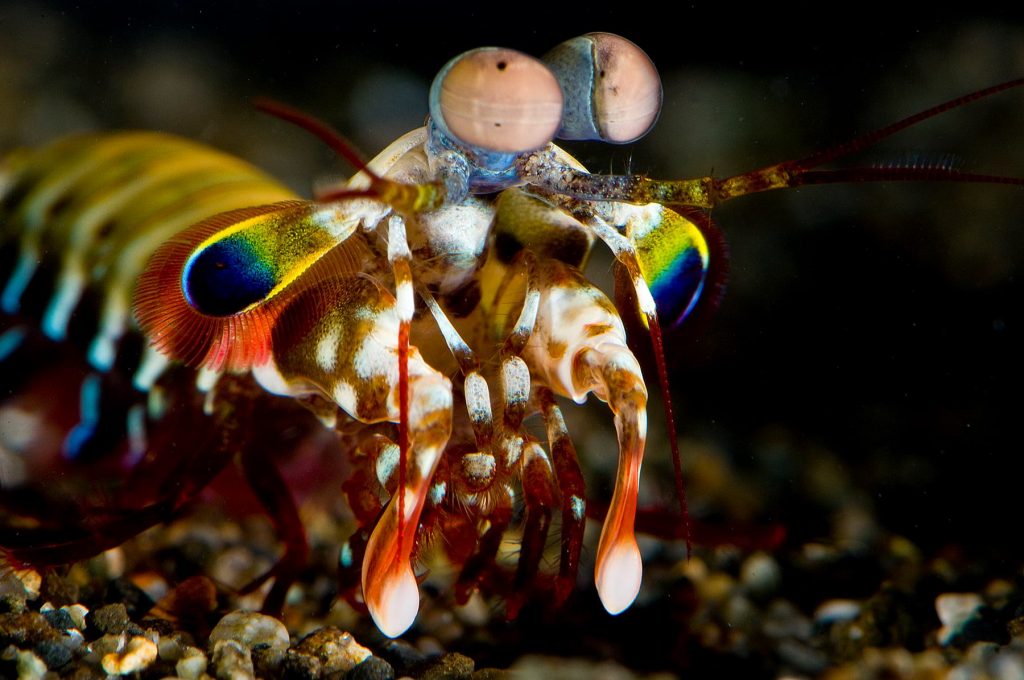 David Attenborough’s Life In Colour was shot partly in Queensland. Here is a mantis shrimp.

Like all the agencies, Screen Queensland is very serious about developing internationally enticing producers and productions who call the state home. They are vital assets.

It has just announced it is booking ten local producers into the International Roadmap program from a European organisation called Creatives Loop International. Ten is a large number of people to be fired up by the same program to work in the same smaller production community.

As Jo Dillon, the Chief Creative Officer of Screen Queensland, explained in an email to Screenhub, ‘I met Creatives Loop International’s Managing Director Nicola Pinder at the Cannes film festival a few years ago and we talked about the work they did to connect established and up-and-coming producers into the international market. Of course at the time which was pre-COVID, Screen Queensland used to be able to send producers physically overseas.

‘Effectively, the impressive work Creatives Loop International does significantly shortens this seemingly gaping distance between local producers and the international market, overcoming the isolation that producers in far flung markets have from decision-makers in the US, UK and Europe.’

According to the announcement, the producers will ‘engage in over eight weeks of virtual roundtables and one-on-one sessions to select new target markets, perfect pitch materials and delivery, and set-up meetings with key industry decision-makers’. This means no-one has to leave home to do it (though ten weeks in Berlin’s autumn would be a most pleasant experience).

They will need strong slates and strong international audience appeal. ‘I think that producers need to have not just one great idea but a slate of great ideas,’ Dillon acknowledged. ‘You never know when someone who is buying content is going to have something similar in development or whether a production that won’t be optimal for that platform will be perfect for another –  so you definitely can’t rely on just one or even two ideas.’

Creatives Loop international comes with a recommendation from Ausfilm, certainly an organisation which can assess expertise in this space. It has worked with Screen Australia in the past, as seen in the video below:

It describes itself as ‘an award-winning International Business Development consultancy with a focus on Media and Immersive Tech.’ It was started by Nicola Pinder and Simon Preston in 2006, with £3000, two phones and an old laptop, violating most rules about start-ups.

It has a much broader remit than the screen sector.

‘We enable Creative and Tech Companies, Organisations and Networks to internationalise more quickly, effectively and efficiently. We accelerate growth and get tangible results. We also offer specialised foreign direct investment consultancy services to Private and Public sector agencies across a broader range of Tech sectors.’

Even though the offer here is about individual producers, the company is about inter-company transactions and trans border enterprise growth. Which fits the trajectory of many Australian production companies, pioneered in recent years by Hoodlum Enterprises and See-Saw Films.

What makes for a successful producer?

In our email discussion, I asked Jo Dillon to describe what makes for a successful producer.

‘I think it’s a combination of the ability to be able to identify and empower incredible talent, combined with the ability to understand and be able to articulate the potential of a great idea,’ she replied. ‘It takes market savvy and know-how to understand where that idea might fit, and who might buy it, the work ethic to do everything it takes to bring an idea to fruition and the humility to admit when they don’t know something, need help or need to work with someone who has skills that they don’t.’

To reach out internationally they need to do a solid amount of practical detective work.

‘I think that producers need to know what’s already out there as far as they can in the market, and familiarise themselves with the shows that are already on the networks and streaming platforms that they’re pitching to. They also need to be aware of the competitors of the buyers that they’re talking to and what’s on their slates. When you go looking, there’s quite a lot of information about what’s in development, and that’s vital information so producers can create pitches that are as targeted and relevant as possible.’

Thinking globally and working locally is a challenging activity. Surprisingly, Jo Dillon is not concerned with the location, scale or romantic sense of place to propel a good story in this context.

Instead, she believes that, ‘Good ideas are those that are really specific either in terms of their setting or the world of their story, and the main characters have something unique or important to say and are told by storytellers who are able to authentically embody that perspective.’