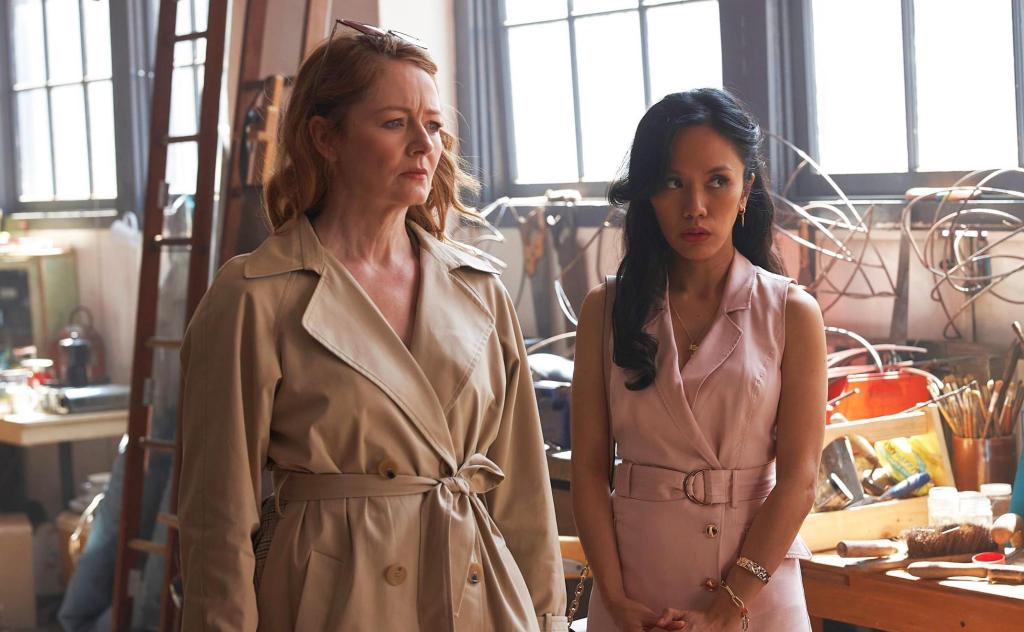 ‘Grab your squad and make a date with The Unusual Suspects.’ So says SBS, announcing the premiere date for the four-part heist caper: Thursday June 3 at 8.30pm with all episodes available immediately via its On Demand service.

The trailer was also unveiled this week and personally, I can’t wait for this one. It looks fun, funny and empowering (as it says on the tin), and is set in ‘Sydney’s glamorous Eastern suburbs’ where a diverse girl gang gathers to lift a $16 million necklace. Looks a bit Oceans 8 but with Filipino-Australians, Miranda Otto as a rich bitch and lots of harbour views.

It also happens to feature one of my favourite Australian actresses, Heather Mitchell, working in an ensemble cast with Otto, Susie Porter and some newish-to-me faces: Aina Dumlao (Sanzaru, Ballers, MacGyver), Michelle Vergara Moore (Condor, The Time of Our Lives) and Lena Cruz (Shortland Street).

In the release, Miranda Otto said what attracted her to the story was ‘the joyful, colourful sense of fun. This high-pitched zany caper felt really fresh as an Australian project. It’s also a wonderful window into a culture that exists here that people probably don’t know a lot about.’

Also quoted in the release, Michelle Vergara Moore said: ‘There’s suspense, intrigue and mystery but it’s also very funny. We had such a blast shooting it, so I really hope everyone enjoys watching it. As the daughter of Filipino immigrants, shooting this role with this amazing cast of women has been one of the highlights of my career.’

The producers of The Unusual Suspects are the prolific and award-winning filmmaking duo Angie Fielder and Polly Staniford, whose recent credits include Lion, nominated for six Academy Awards® and four Golden Globe Awards as well as Berlin Syndrome, Dirt Music, The Other Guy and The Unlisted. They’re joined by Vonne Patiag (Halal Gurls) as Associate Producer.

The drama is written by series creator Jessica Redenbach (Spirited, Rush), Roger Monk (Nowhere Boys, The Secret Life of Us) and co-writer Vonne Patiag, with Margarett Cortez as Script Consultant.

Celebrating Filipino culture and making it all accessible

The series will be subtitled in Filipino, Simplified Chinese, Arabic, Vietnamese, Korean and Hindi and will be added to the subtitled collection on SBS On Demand. It will also be available with audio description for audiences who are blind or vision impaired.

SBS will also be ‘celebrating across its platforms with a curated collection of content across the network celebrating both women and Filipino culture. The Feed’s Alice Matthews will also present a special half-hour program – Unwrapped – featuring the cast and creatives discussing gender, race and representation.’ (This will be on SBS On Demand following the series premiere.)

Production credit: The Unusual Suspects is an Aquarius Films production for SBS with major production investment from Screen Australia in association with Screen NSW and About Premium Content, which also handles international distribution. The series is financed with support from Cutting Edge Post.

The Unusual Suspects premieres Thursday June 3 at 8:30pm on SBS and SBS On Demand (full-series drop).