Will Coffs Harbour get a studio complex with virtual production and added golfcarts? The bid opens with a key ceremony.
David Tiley 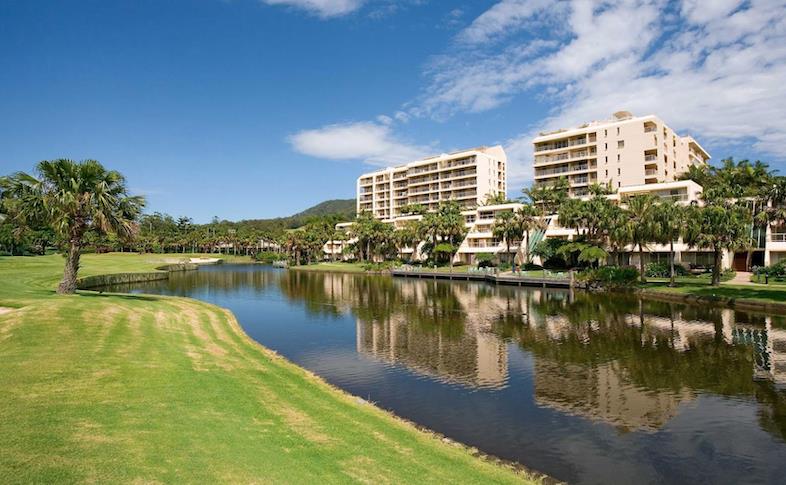 Flocks of American producers have been descending on Australia looking for facilities and government support as the streaming companies hunt for meat-and-potatoes content for their catalogues.

Studio companies are busily getting construction permits and lining up concrete suppliers. The WA industry is pushing ahead with the Fremantle Studios, Melbourne is adding another soundstage and extra facilities, country mayors are dreaming big – and Coffs Harbour has joined the push as well.

Resort owner and operator Peter Montgomery has 100 acres of former banana plantation in Coffs Harbour which he wants to utilise as the real estate for a new studio complex. He has announced a planning application he will lodge with the state government as a State Significant Development and turned this moment into a formal ceremony with attendant industry and government grandees. He is telling the sector that this is a serious project run by adults.

He is working with Keith Rodger, described in the announcement as the spearhead of the project, who has produced three Hollywood films starring Russell Crowe. He has been Mr Crowe’s assistant since 2005, which helps to explain why Crowe is the third person promoted as a key stakeholder in the project.

Russell Crowe has form in rural development in New South Wales in a very endearing way. He used to run the pub at Nymboida, a tiny community further up in the Northern Rivers region, where he also built a Museum of Interesting Things, which included a collection of his costumes.

The estimated cost of this will be $438 million, though the number of studios has not been announced. All the other studio complexes in Australia have been built around specific needs and advantages,  and this one will need angles as well.

Leading Edge Data Centres is committed to providing fat data pipes – the company is building a network of enhanced data links and storage, and already has a centre in Coffs Harbour. The studios will be ‘offering cast and crew a premium lifestyle’, which includes ‘a luxury apartment complex / hotel, nine-hole golf course, three swimming pools, tennis courts, restaurant and bars, extensive events and conference centre, resort spa and gym, as well as the National Marine Science Centre.’

The airport, described as ‘internationally capable’, is just down the road.

There is a variety of locations with rainforests, ocean views, the beach and the ocean, along with more backlot space in a nearby golf course.

According to Rodgers, ‘Combine that with LED virtual studios, sound-proofed stages, water tanks, a full resort and adjoining city offering the freshest and best cuisine: it’s our coastal lifestyle, all designed to make production more efficient, cost-effective and enjoyable for actors, crews and their families.’ The consultant architect melding this tourist paradise with the huge grim sheds of a studio complex is Rob Harper of RDO Architects, extending himself joyfully beyond bars and bike shops.

Representatives of various organisations already around Fox Studios in Sydney’s Moore Park attended to signal preliminary interest. They included AFTRS, ARRI, VA Digital Hire, Trackdown and Spectrum Films, along with the CEO of AACTA, Damian Trewhella. US company Lux Machina is mentioned as a potential partner as well with its expertise in EPIC and its virtual production workflows.

The only really specific response comes from ARRI. Local Managing Director Brett Smith is quoted as saying, ‘It’s fantastic that the partners in a greenfield studio site reach out so early and eagerly to industry partners like ARRI… ARRI’s product strength is in its R&D and we are already sharing knowledge with Keith on our shared vision of where studio technology is heading.’

The government has identified with this in strength, from the Treasurer Dominic Perrottet to the Deputy Premier John Barilaro down to the local member Gurmesgh Singh and the Mayor Denise Knight, along with Grainne Brunsdon as Head of Screen NSW.

Missing is any indication of the ultimate financier, or even public government support to pay for the extensive planning that will be needed.

But even the planning permissions are expected to take a year. Received wisdom has it that studios take three years to plan and build and ten to demonstrate their viability. That is a long-term project in a short-term world.

It seems that the ultimate selling point of the brand is about cutting edge technological and process excellence. The advantage being a high-tech greenfields design rather than the bolt-ons that everyone else is deploying.

A matter of perspective

This is a capital intensive project in a space where extraordinary changes are happening quickly.  Any investor’s risk analysis will be focused on the value of the dollar, market saturation, internal competition in North America, the shift to Asia… the list goes on.

Governments are always being asked in cultural funding whether they become prisoners of their own bricks and mortar investments, unable to pay for projects or real human beings. So far that has not happened in studios, because there is enough footloose production to keep them running and the employment benefits are overwhelming.

But other parts of the sector are praying that the benefits of virtual production and new equipment will make the large studios obsolete. That could become a very interesting problem.