Putting Ned Kelly in a Dress: An interview with Justin Kurzel 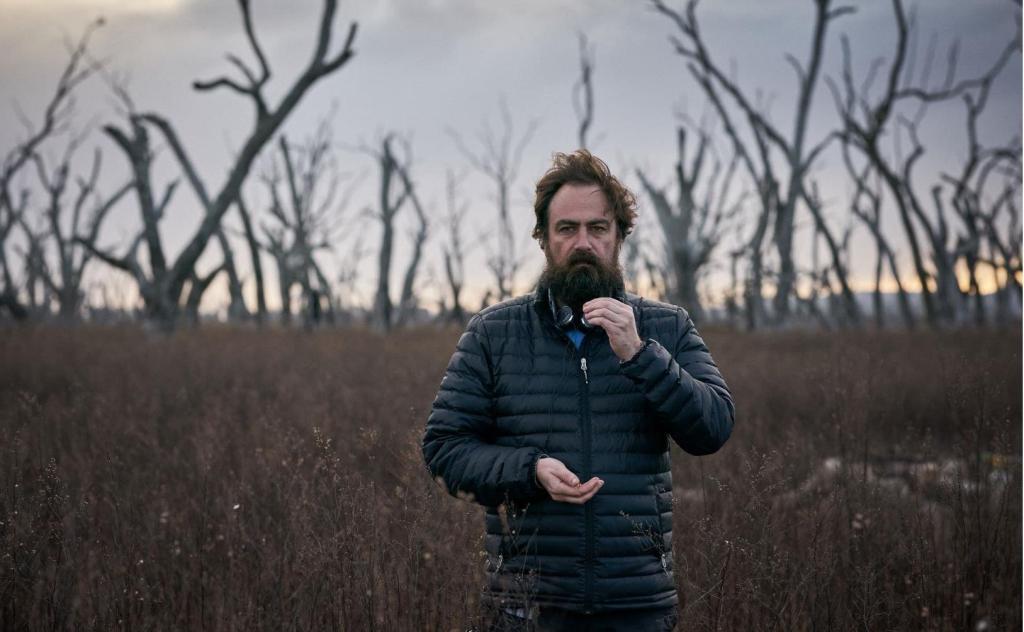 ‘How do we get beyond these kind of folklores?’ Justin Kurzel on location for ‘True History of the Kelly Gang’. Image courtesy Stan.

Justin Kurzel is exhausted. He’s just got off the plane from a six-week shoot in Mumbai, where he was filming the upcoming series Shantaram for Apple TV+. In half an hour he’ll premiere his new film, True History of the Kelly Gang to a Melbourne audience.

Beginning with the disclaimer ‘nothing you are about to see is true’, Kurzel introduces us to Edward (portrayed as a child by Orlando Schwerdt) – a quiet boy from Beveridge, Victoria, who shares an ambiguous, passionate relationship with his dirt-poor and amoral Irish mother Ellen (Essie Davis).

Sold by this mother to the notorious bushranger Harry Power (a deliciously unshackled Russell Crowe) Kelly learns from the brigand that he descends from a line of Irish rebels called the Sons of Sieve –  an army of cross-dressing bandits, infamous for mercilessly terrorising their enemies in Ireland.

Brought up and trained to kill by Power, whilst being coaxed into the familial life of crime by his mother, Kelly slowly but inevitably becomes the deranged, desensitised, killing machine he is renowned as: Australia’s most famous bushranger.

Kurzel’s vivid representation of the story turns the legend of Kelly on its head, forcing the audience to question preconceptions of the cult legend.

Making Assassin’s Creed left Kurzel creatively ‘fatigued’, so the acclaimed director of Snowtown and Macbeth was ready to take on the challenge of adapting Carey’s bold story. The anarchic world of the book and its rejection of convention were drawcards for the director.

“The visual descriptions in the book of the Kelly Gang and the dresses was an aspect I’ve never heard of or imagined,” he says. “There’s a couple of Sidney Nolan paintings with Steve Hart in a dress in the background but that notion of dresses being worn in warfare and worn for intimidation, I just thought it was a really fresh sort of perspective on the gang.”

Having moved to the UK in 2012 to pursue opportunities with his actor wife, Essie Davis, the filmmaker found himself thinking about his home country.That homesickness was further awakened by Carey’s book, which led the director to start prodding and contemplating his own identity as an Australian abroad.

“I was missing Australian voices and thinking about Australian characters and missing the landscape a lot. I think there was a pining there that was making me want to take on the film. Reading Peter’s book really made me think about why this man is kind of at the front and centre of our [national] psyche at times, and about myself as an Australian.”

The idea of investigating male self-image, and the vulnerability, internal struggles and conflicts of violent men, has fascinated Kurzel from his breakthrough Snowtown (about the corruption of a ‘17 year-old killer’) to Macbeth and even Assassin’s Creed.

“It was really interesting thinking of the icon of Ned Kelly that’s supposed to be the kind of epitome of the alpha white male in Australia and then suddenly putting that character without a beard and in a dress,” he says. “There is definitely a provocation of masculinity, of what is the Australian (male) in the book.”

That no-holds-barred prodding of masculinity is evident early in the film, in a moment which could be a scene from any Kurzel movie: having plied the junior Ned with alcohol, Crowe’s Power, shoots a bystander in front of him and then walks him into a bedroom where Sgt. O’Neil (Charlie Hunnam) is in bed with a woman and orders him to ‘shoot his cock off’. Kelly, shaking, can’t pull the trigger, and is mocked by Power. Emasculated, Kelly turns the gun on his mentor.

“What I found really interesting in the book was that it challenged a lot of that machismo that we associate with Kelly. I think Australian masculinity is really complicated. If you’re not an alpha footy-playing kind of Australian male, what are you and where do you fit?”

The clash between overt, violent machismo and femininity collides in the eerily visceral crescendo of Kurzel’s film: Having already made their first ‘cold blood’ kill of a policeman, Kelly and his sadistic gang, gather an army of rowdy teenagers, toting guns with their most audacious plan yet: to rob dozens of wealthy passengers aboard a train. Full of bravado and testosterone, chanting police taunts and insults, the group of tattooed, long-haired, boisterous teens are dressed in flowing skirts, tutus and bracelets.

For Kurzel, the dresses are an ‘anarchic’ punk-like symbol of defiance against masculine and social expectations. Dresses, not guns nor iron helmets, liberate this Kelly Gang from how others view them.

“There was something very powerful about the dresses. I think they’re the real armour in the story,” says Kurzel. “A lot of our references for the gang’s costumes came from particular punk movements in Australia that allowed them to feel empowered and maybe also just feel a little bit more familiar in the way they kind of came across on screen.”

Kurzel, who began his career as a theatrical designer, has always had a strong sense of visual storytelling, and so the costuming in this film is especially rich in detail and meaning. Quoted in the press notes, Kurzel says the costumes (by Alice Babidge) reference the 1970s and 80s: “What I think is really important is silhouette and the silhouette that I saw in Australia in the 70s and 80s, especially on men, was really similar to the silhouette in the 1870’s… It was taking my favourite period in Australian music, and art, and fashion and combining it with the 1870’s and seeing where that sweet spot hit.”

“In rehearsals, I had to get those boys [comfortable] as a gang really quickly. So, they became a band. I put them in a gig at the Gasometer Hotel (in Collingwood) and said, ‘you’ve got three weeks to come up with a set.’ That was an amazing experience because they came up with about eleven songs that were really good. The ‘Gaso’ was absolutely packed and not many people knew that the band was part of this film.”

Kurzel says that process really informed a lot of the film. “There was something about the attitude of that music and about them that was so anarchic and subversive. The boys were, not in a glib way, writing and singing and creating and playing based on Peter’s work. Even though they sounded like a contemporary Melbourne band, there was something really reaching back into this piece of literature. There was something fascinating in the way their music and their energy still felt as though it was coming out of the honesty of the work.”

In the end, two of the band’s songs remain in the film and Kurzel says the boys are going to release an album.

One of the most ingenious and punk-ish ideas of the film, casts Russell Crowe as the self-destructive, father-like mentor, who initiates Kelly into his evil world of crime and anarchy. That casting was also the glue that held the film together.

“The film wouldn’t have got up without Russell and without him being part of it,” says Kurzel. “The film fell over a couple of times. Russell stayed with it and was really, really loyal. He was just a gem, he’s a very, very genuine man. He was hugely inspiring on set and came up with ideas that I hadn’t thought of and even approaches to filmmaking that were hugely helpful.”

Blending traditional ideas with radical reconsiderations, truth with punk storytelling, and stars with debut actors, True History of The Kelly Gang aims to hold a truthful and contemporary relevance to today’s Australia, says Kurzel. “Who are we and how do we embrace our past, both good and bad, in a sophisticated way? How do we move forward as a nation? How do we get beyond these kinds of folk laws? I think that’s how the film speaks to 2020.”

True History of The Kelly Gang is available now on Stan.