Postcard from Cairns: Biopixel delivers nature to a locked down world

Specialising in underwater footage, the Cairns-based company has a new lens that helps them move onto land.
Rochelle Siemienowicz 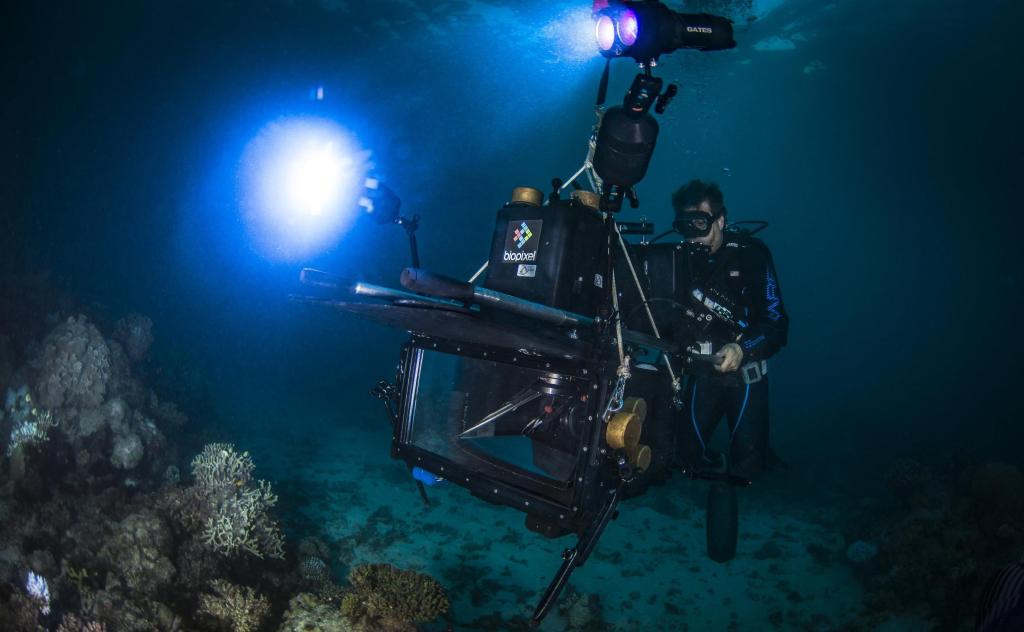 ‘The reef’s not dead!’ Photo by Christian Miller, courtesy Biopixel.

Writing from deepest darkest Melbourne in the middle of a hard lockdown, who could blame me for wanting to profile Biopixel, a Cairns-based screen company specialising in nature and underwater filming? Talking to them was the closest I was going to get to my annual winter snorkelling getaway. Turtles, whale sharks, manta rays, blue skies and warm water, this story had it all.

As it turns out, Biopixel is keen to evolve into a company known for its work on land as well as in the oceans, but their work under and around the water continues to be the core business, alongside newer terrestrial pursuits.

In August, Biopixel was announced by Screen Queensland as one of the eleven businesses sharing in just under $1 million as part of a COVID-19 SQ Enterprise Support Package. This relief was part of a total $3.3 million package to help the state’s screen businesses ‘pivot and diversify through the challenges and opportunities presented by the global pandemic’.

Founded in 2013 by marine biologist, shark expert and Emmy winning cinematographer Richard Fitzpatrick (ACS) and IT entrepreneur Bevan Slattery, Biopixel has since become one of Australia’s premiere companies specialising in natural history behavioural sequences. They do this on spec for film and TV clients as well as for their own huge stock library. Clients include the likes of Nat Geo, Discovery Channel, BBC, Netflix and Disney, just to name a few.

The core team of the company is small, resourceful and multi-talented. All of them sound mad about nature. From operations manager Hannah Robertson, who started out as a passionate diver and shark advocate, even spending time with Valerie Taylor, to marine scientist Adam Barnett, cameraman and sound recordist Tai Inoue, production assistant Siege Schafe and underwater cinematographer Bec Piper.  These would be fascinating people to spend time with on the reef, or even back in the edit suite.

Biopixel has its own conservation foundation, and collaborates closely with other researchers and institutions, like James Cook University, where the company’s headquarters is based. Their recent filmography includes contributing crocodile footage for Black Water: Abyss, and to BBC’s Blue Planet Live and filming Great Barrier Reef 3D for Giant Screen/IMAX. Other services on offer include a highly specialised equipment inventory to hire, including the Phantom 4K Flex high speed camera, boat hire and crewing (they’ve got their own expedition vessel, the Argo), as well as an aquarium studio and in-house editing.

Upon receiving the enterprise funding, Fitzpatrick, who is also Director of Photography at Biopixel, said it couldn’t have come at a better time for the business; that they were going to use the money ‘to purchase the ultimate long lens that will see Biopixel become a fierce competitor in the natural history industry, among other things that ultimately will allow us to take on contract filming work we would previously have missed out on.’

Basically, this Canon 50-100mm long lens will help them work on land. In the words of Hannah Robertson, ‘It’s for filming terrestrially, top side. A lack of this lens was one of the things inhibiting us from taking on quite a few jobs.’

Speaking on the phone to Screenhub, Robertson explained the company’s thinking:  ‘One of our cameramen who we took on a few years ago, Tai Inoue, is a macro and motion control specialist with a keen interest in the terrestrial side of things, so we had always planned to go in that direction. But what we’ve been doing for the last few years is upgrading our entire HD library of the Great Barrier Reef from 4K to 8K. We completed that about six months ago. And because we’re also known for venomous and dangerous animals, we started on spiders and snakes. And all those things can be a bit macro, and what we’ve been missing is the long lens to complete the sequences of our stories and film the really cool stuff.’

‘I can tell you we’ve developed an amazing wish shortlist already for this lens!’

The Screen Queensland funding goes a long way towards paying for this lens that retails for around $90,000. It had to be built to order and should be delivered some time during September. ‘I can tell you we’ve developed an amazing and ambitious wishlist already for this lens!’ Robertson said.

What’s been happening in the natural history footage industry since February?

Robertson said that for Biopixel, there are several arms to the business, including the Foundation and the research vessel Argo. ‘ARGO was parked pretty much as soon as COVID hit and the Foundation was mainly taken care of by Adam during this time. However, the production side of our business has gone through the roof because the production companies over in Bristol and other main hubs that create natural history documentaries, were no longer able to travel. They were unable to finish their stories, so they would contact us to trouble shoot solutions.  We have an aquarium studio that we run in collaboration with James Cook University – probably the largest biological filming studio in the southern hemisphere, and we’re based between two World Heritage Listed areas, the Great Barrier Reef and Australia’s Wet Tropics, both of which we are still able to access even with the local COVID restrictions.  Along with our extensive stock footage library, we have been in a strong position to help them finish their productions.’

The Reef’s not Dead!

Spare a thought for all the dive companies up in Cairns, that are really struggling for a lack of tourists. Robertson says that from what we’ve been hearing and reading, if you suffer COVID, you may no longer be able to get a medical certificate for diving, even if you haven’t had symptoms. ‘So we are taking all necessary precautions.’

One project they’re particularly excited about is with the Fisheries department, researching shark behaviour, springing off the back of a recent spate of attacks in the Whitsundays.

When asked about the Great Barrier Reef 3D IMAX movie (December Media / MacGillivray Freeman Films/Slattery Family Trust), Robertson says this was shot three years ago as the company’s first 3D movie and the plan was to make a few of them, ‘because we have this insanely large rig that allows us to film in 3D. But then COVID happened and everything slowed down because all the IMAX theatres have closed down.’

‘Great Barrier Reef 3D was doing really well over in the States prior to that. Our co-producers, December Media, were working with the distributors to start hitting the Chinese and Asian markets and we’ve been waiting for Sydney to reopen IMAX before premiering in Australia.’

Robertson said the film has a strong conservation message behind it which matches with Biopixel’s passion and ethos. ‘A key message is to say that the reef isn’t dead and how people can get involved to help preserve and protect all reefs around the globe.’

‘Once you say something is dead, everyone gives up on it.’

‘There are parts of the reef that have struggled over the years, but not always the same parts every year, depending on bleaching. We’re very conscious of the fact that once you say something is dead, everyone gives up on it. Whereas we do need to make some changes, but we can save it, and we were very passionate about making that movie with December Media. It’s a wonderful way of educating people, especially children, and there will be more 3D movies coming from us soon. Watch this space.’

And if, like me, you need one final burst of positivity from Up North to lift the lockdown blues, you could follow Biopixel on Instagram for daily tropical updates, or watch this clip about their work with researchers to respawn the reef: