A South Korean fable about capitalism made history in a ceremony filled with songs, speeches and snubs to Netflix.
Rochelle Siemienowicz 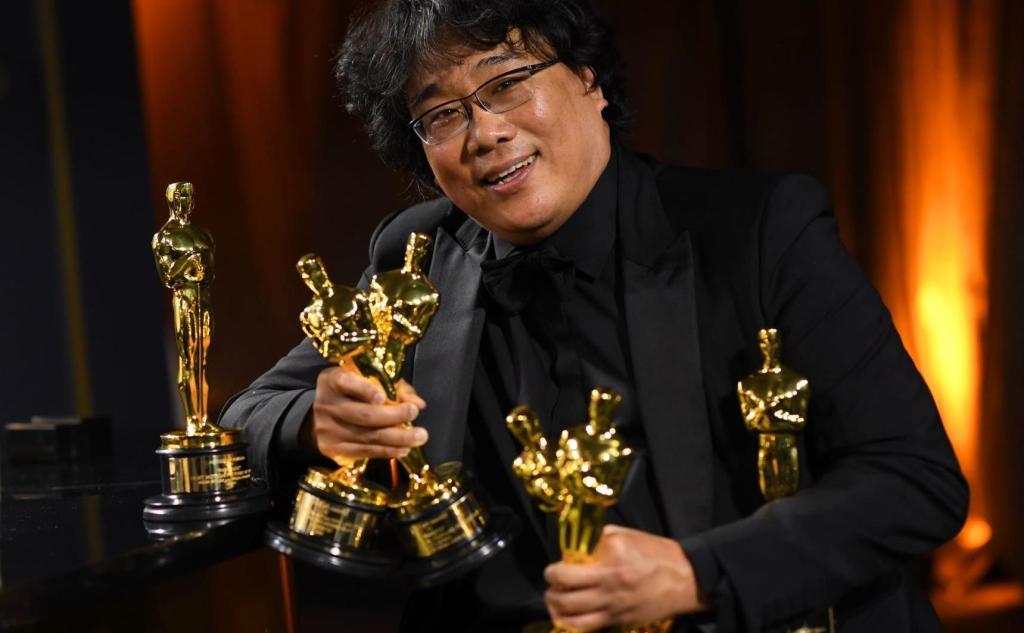 This is the first time in 92 years of Academy Awards history that a film not in English has won Hollywood’s most golden prize, and having Bong on stage every five minutes made for a truly unique ceremony. (Has any translator ever shone so brightly as Sharon Choi?)

Other historic firsts included: Taika Waititi as the first Maori Oscar-winner, dedicating his Best Adapted Screenplay win for Jojo Rabbit to Indigenous kids all over the world; the first presenter with Down Syndrome, Zack Gottsagen from The Peanut Butter Falcon, and Iceland’s first Oscar winner, Joker’s composer, Hildur Gudnadóttir who was also only the third woman to win the Best Score category.

Steve Martin: ‘Think how much the Oscars have changed in the past 92 years…back in 1929, there were no black acting nominees.’

The hostless ceremony went on at a mostly cracking pace but there were too many musical numbers, in my opinion. Hollywood has clearly registered the fact that musicals are one of the few genres still able to draw audiences away from Netflix. Janelle Monae did the opening number, singer of the moment Billie Eilish sang a version of the Beatles’ ‘Yesterday’ to accompany the In Memoriam tribute (or ‘The Death Montage’ as my friends call it); and Elton John was there to sing and collect Best Original Song for Rocketman’s ‘Love Me Again’, which he shared with sweet emotion with Bernie Taupin.

Most excruciating moment of the night was seeing seated audience members trying to look gangsta as they jigged away to Eminem’s surprise performance of his 2003 Oscar winning Best Original Song ‘Lose Yourself’. He got a standing ovation at least.

Back to Parasite. It’s available on iTunes now if you missed it. Or Madman have just expanded it back to 90 screens so you can watch it big. Or you can wait for the TV series, as Bong is currently adapting it for HBO.

Writer-director-producer Bong had a dream run with the dark comic thriller about class, poverty and capitalism, right from its premiere at Cannes, where it unanimously won the Palm D’or, through to cinemas, where it’s grossed $35.5 million in the US and Canada alone, and now to the Oscars. We knew it would get something but not that it would beat predicted wins for Sam Mendes’ 1917 and the industry’s nostalgic favourite, Tarantino’s Once Upon a Time in Hollywood, as well as veteran Martin Scorsese’s The Irishman and Todd Phillips’ Joker.

Bong was clearly overwhelmed. After receiving his Best International Feature award early in the night, he said he could now go and ‘drink until next morning’. He had to stay sober much longer. Accepting for Best Director, he name-checked Scorsese as inspiration, thanked Tarantino for being an early supporter, and said he wished he could get a Texas Chainsaw and cut the award into five pieces they should all share. A stage full of cast and producers came on at the end to accept Best Film. Surely all of South Korea were celebrating. Or even all of Asia.

Also loudly celebrating the Parasite win was the Melbourne industry crowd at the Cinema Nova Oscars live broadcast, where the film was a clear favourite. Cinema Nova CEO Kristian Connelly announced the Madman distributed Parasite has taken $2.8 million in Australia over a whopping 33 week release period, and 20 per cent of that has been at the Nova, their highest box office film since Grand Budapest Hotel.

Bong (whose previous films include Snowpiercer, Mother, The Host and Barking Dogs Never Bite) famously became a vegan when researching Okja, his sci-fi family film about the horrors of the fast food industry. But it was another famous vegan activist whose acceptance speech made big news this time. Joaquin Phoenix, accepting the Best Actor award for playing the lead in Joker, used the platform to call for world peace, better behaviour and nicer treatment of cows and other species.

It was actually a beautifully written and delivered speech, humble, inspiring and much less cringey than it sounds:

Phoenix was the clear favourite to win that award, as was Renee Zellweger for her performance in Judy, and Brad Pitt for his charming Supporting Actor performance as a retired stuntman in Once Upon a Time in Hollywood, and Laura Dern for her scene-stealing Best Supporting Actress role in Marriage Story. She dedicated the Oscar to her ‘hero’ parents, fellow actors Bruce Dern and Diane Ladd. Disappointment perhaps for Australia’s outside chance of Margot Robbie in Bombshell, but nobody was really expecting anything other than Dern.

Bombshell did get a win for Best Makeup and Hair, with the winners, Kazu Hiro, Anne Morgan and Vivian Baker, thanking producer Charlize Theron for allowing them to take hair and makeup into new and unconquered realms. We are really curious to see it now.

Production Design went to Once Upon a Time in Hollywood’s Barbara Ling and Nancy Haigh, two grey-haired women working at the top of their game for Tarantino.

Netflix’s American Factory won Best Documentary for Steven Bognar, Julia Reichert and Jeff Reichert, a film about Chinese and American work practices, it comes from the Obama’s production company. Best Documentary Short went to Learning to Skateboard in a Warzone (If You’re a Girl), by Carol Dysinger and Elena Andreicheva.

Best Animated Short went to Hair Love, (Matthew A. Cherry and Karen Rupert Tolivera), a film about a black dad attempting to style his daughter’s natural hair for the first time. The heartfelt film about black hair acceptance (a very big issue that Chris Rock has previously addressed) and fatherhood is available to watch on YouTube. Cherry, a former NFL player, dedicated the award to the late basketballer Kobe Bryant.

And so to the biggest upsets of the night. There was the fact that Netflix was nominated for 24 and only won two, with not even a single nod for Scorsese’s The Irishman. The industry was perhaps making the same point that Kristian Connelly made at the Nova event: ‘This is a fight for our life’, a fight between movies and streamers, a fight for cinema itself.

The other big upset, was of course, Rebel Wilson and James Corden dressed as cats and dissing the visual effects industry. And so poor Cats becomes the punchline to yet another story.