Ones to Watch 2020: Twelve Emerging Producers You Need to Know About

Watch these names and faces. You need them on your radar.
Rochelle Siemienowicz 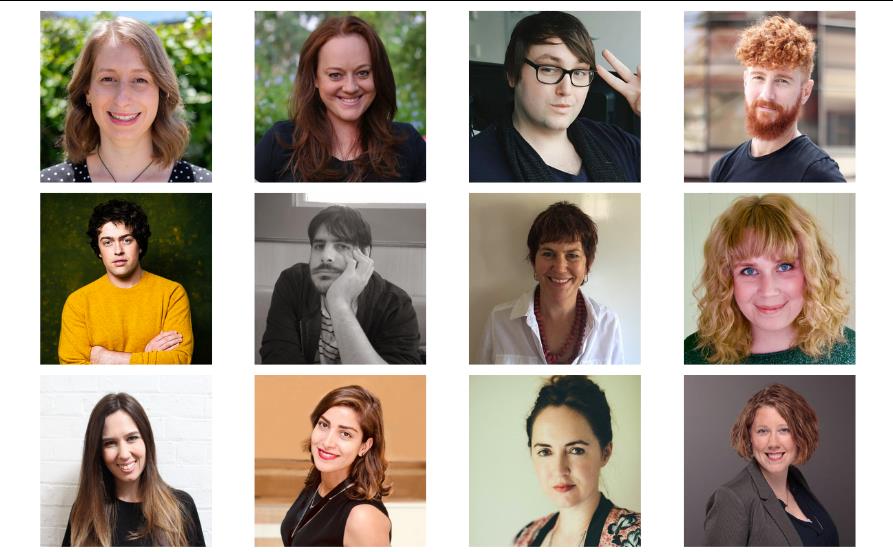 If you’re an emerging Australian screen producer, being chosen as one of Screen Forever’s annual ‘Ones to Watch’ will put you in the national spotlight. It will connect you to peers, mentors and investors in a way that nothing else really matches. Ideally, it will also make doing business a whole lot more fun and friendly. The most important word in the world of producing is ‘relationships’, and this program is all about building them.

Announced in late December, the twelve 2020 Ones to Watch are a broad bunch. Their work covers everything from TikTok to VR, to arthouse cinema, documentaries and genre TV. Here are their names and production companies:

Every single one of them is worth an interview, and hopefully we’ll to get to them over the coming year. We managed quick chats with just four, and together they give some idea of the breadth and experience within the group, the issues they’re grappling with, and the future they see for Australian screen production.

There’s Hayley Adams who always wanted to be a school teacher but fell in love with the kinds of shows that gather cult fandom. She’s a VCA producing graduate whose credits include making Love Songs, the first narrative series for TikTok, and which amassed 12 million views. She is currently producing the web series Wicked Women, following the true story of Australia’s first lesbian erotica magazine and has been matched up with mentor Meg O’Connell of Unless Pictures (Retrograde, Vertical) and will also be speaking at Screen Forever about how to make work that gets liked, subscribed to and shared.

At the pure cinema end of the spectrum is Chris Luscri, a cinephile curator-turned-producer who now works closely with Amiel Courtin-Wilson at Flood Pictures, and whose credits include making the world’s first vertical-screen feature film, Youth on the March, as well as executive producing Allison Chhorn’s recent acclaimed hybrid doco The Plastic House. Luscri has been matched with mentor Lizette Atkins of Unicorn Films, who he’s known for a while.

Read: Ask the mentor: How do I make Screen Forever online worth my while?

And just to prove it’s not all about extreme youth, there’s Brisbane-based Ljudan Michaelis-Thorpe, a Bidjara and Dhunghutti producer and social entrepreneur in her 50s. She’s open about being neurodiverse and the way it helps her stay across the detail of numerous projects. She has a broad slate of upcoming projects (all of which have a multiverse), including an Indigenous horror thriller Blood Dirt (she’s being mentored on that by Leah Purcell and Bain Stewart), and has a passionate interest in using VR, and supporting First Nations and Indigenous women’s storytelling. She’s been matched with 720 Creative as mentors.

Chosen from more than 100 applicants, all the Ones to Watch have been engaged in an intensive program of skills-based webinars and networking, getting their nominated projects ready to pitch for the upcoming Screen Forever conference and marketplace on 16 -18 February. They’ve been individually matched with leading industry mentors who’ll provide one-on-one advice and support over an extended period.

Since its inception in 2013 (initially as part of SPA Fringe), the Ones To Watch program has hothoused and networked the talent of more than 120 emerging Australian producers from all states, and across platforms and formats. You can check out the alumni and their matched mentors here, many of whom are now doing big and interesting things. (Just one example is Taryne Laffar, 2019’s winner of the SBS First Look Award, whose WA production company Pink Pepper is making the Our Law documentary series and the RED anthology of eight stories from Indigenous female directors.)

The pandemic sent the 2020 Screen Forever conference planners scrambling and pivoting like mad. Postponed, then planned to be held as a real + online event at the Gold Coast, and finally conceding it must be a purely online event. The Ones to Watch program similarly needed to be held differently this year, and everyone is must making the best of a less than ideal situation.

But producers are nothing if not adaptable, and by all accounts it’s been working well, with a unique collegiality formed by the hardship. The participants we spoke to were full of praise for  Georgia Kinninmont, SPA’s Communications and Publicity Manager, and Brad Taylor, the organisation’s Membership, Licensing and Inclusion Manager, who they mostly dealt with.

Talking on the phone to Screenhub, Kinninmont, who’s been involved for the last three years, says this iteration has had a real focus on developing the producers as individuals, ‘because when you go to market you’re as much selling yourself as you are your project. So we did a webinar with [screen career coach] Ellenor Cox on developing your project and your personal brand, with a big focus on pitching so they could get prepared for SPA Connect at Screen Forever.’

There were also intense nitty-gritty sessions on business essentials to complement the creative side: superannuation, tax, business setups, copyright and chain of title – ‘all the things you need to know to be producing in the current landscape.’ (Establishing clear chain of title came up in a number of conversations, so we gather it’s really that important!)

Another highlight was the opportunity for participants to meet with Ones to Watch alumni, who Kinninmont says were overwhelmingly keen to be involved. ‘I approached about 12 of them, expecting only a few to respond, because everyone’s so busy, but they all they wanted to make the time, and we had people from 2019, 2018 and even back to the start of the program, which tells you something about the support for it.’

a reminder to newcomers: experienced players are often hungry for access to the next generation of talent and fresh perspectives. Don’t forget you have things to offer.

It was the same case with approaching established producers to be mentors. ‘We’re constantly impressed with the number of people from our membership that put their hands up to be involved, from our big members, from feature films, TV, online and alumni. This year we have mentors from all over Australia across genres, including Fremantle, Matchbox, Aquarius, Northern Pictures, Hoodlum, Beyond and Easy Tiger.’

‘In fact I didn’t actually have enough mentees to go around because everyone’s so keen to be involved! I’m keeping them on the back burner for next year.’

Here’s a reminder to newcomers: experienced players are often hungry for access to the next generation of talent and fresh perspectives. Don’t forget you have things to offer.

It is pretty evident that the program has changed over the years. These days, there are many more kinds of production in which producers develop, and more opportunities to distribute their titles. There is a real blurring of the lines between content mediums and genres, and people are developing broad based careers to stay competitive.

The Experience and the Goals

All of the participants we spoke to mentioned the value of meeting the others in the group, sharing experiences and skills, and developing those relationships with possible collaborations down the track.

For Hayley Adams, meeting up with others working in the new online spaces has been useful and encouraging. ‘Although what we’re doing has been around for a while and is supported by Screen Australia, it still feels new trying to make it financially viable and sustainable, so sharing ideas around that is super helpful,’ she says.

Being mentored is obviously a key value of the program. As Ljudan Michaelis-Thorpe says, ‘The mentors for all of us are really committed, not just to teaching us, but to seeing our projects actualised. What I’m experiencing from my mentors from 720 Creative is really next level mentoring.’

Luscri entered the program hoping to build skills and experiences. ‘I’m not formally trained. I didn’t do a Masters of Producing at VCA or AFTRS, so a lot of more learning has been very self-directed and through working with Amiel Courtin-Wilson at Flood. So here it’s about trying to build the connections and the relationships that will help me establish the business side of producing in a more substantial way. I’m also hoping to just absorb some of the talks and get sense of the zeitgeist, the lay of the land, and who’s doing what and who might be cool to work with.’

Living in Darwin, or actually an hour and a half out of Darwin, Philip Tarl Denson was always intent on using the Ones to Watch opportunity primarily to connect with others. Despite his US connections, ‘no one down south in Australia knows who I am,’ he says. ‘I need to make more connections nationally and already this has helped, meeting other producers both in the program and other people who’ve contacted me because of the announcement.’

There’s always the matter of money, of course. As Denson says, ‘It was good to learn more and think more about the financial stuff which is always the bugbear of producers. Where does our money come from? We need to not just rely on screen bodies, which have been amazing, and for me, really important. But also, finding other ways and avenues to buyers and investments.’

‘Sometimes producers get excited and just want to make something, but as always, the script is king.’

Speaking particularly about the independent feature film sector, Chris Luscri also talks of finding new avenues. ‘Unfortunately I think cinephile has become a dirty word in the Australian screen industry, which is a shame, partly because of the way in which the theatrical model has shifted over the last five to seven years. It’s made the kind of observational filmmaking that I’m deeply invested in more tenuous, at least in terms of a national screen culture. Those who want to make director-led feature films predominantly need to look to the international sector to co-finance and distribute their work. While screen agencies may be forced through circumstances and changes through tax law to be more conservative in their choices, there’s paradoxically a lot of opportunity now in the private sector and through other means, whether it’s philanthropy or different kinds of investment.’

Making marriages between art and commerce is what the producer’s job is all about. As Denson said of the Ones to Watch program, it’s reiterated to him the importance of the creative side. ‘Whether you’re trying to do a small web series or a big film, you have to put time into the quality of the writing. Sometimes producers get excited and just want to make something, but as always, the script is king.’

Watch these ones. They not only sound smart, they seem nice.

As Michaelis-Thorpe says, ‘This little cohort we have this year are really clever. They’re thinking outside the box, and they’re really actually very kind-hearted.’

More information about the Ones to Watch class of 2020 here.