Jemaine Clement and co strip off and speak in tongues in a comedy that lets you choose your own adventure.
Silvi Vann-Wall 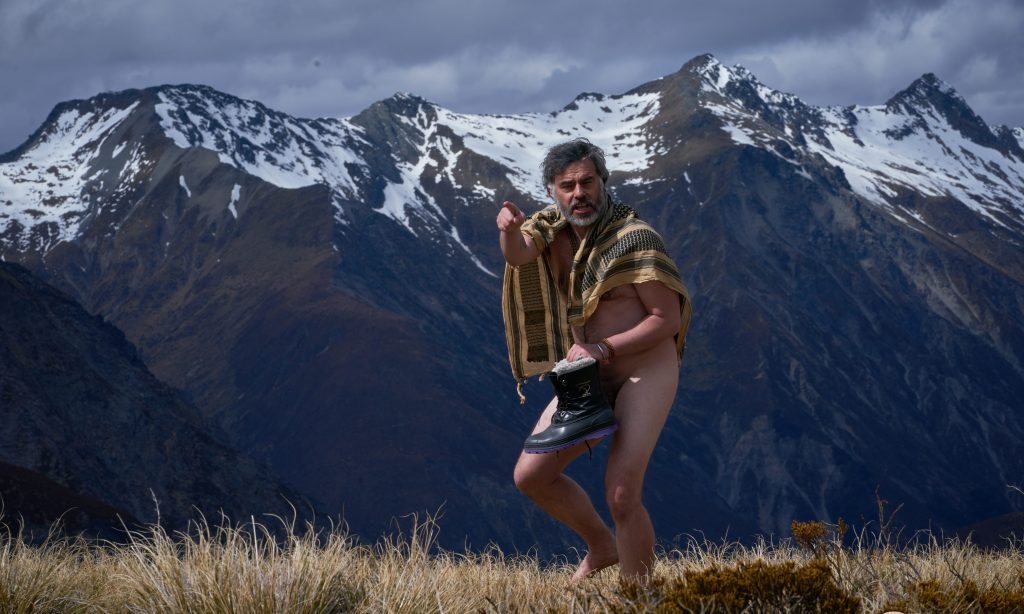 Who else had ‘Jemaine Clement plays a nudist love guru who speaks only in gibberish’ on their 2022 film bingo card?

The Stan Original film Nude Tuesday just dropped its first trailer, among other things, and it’s safe to say audiences are in for a wild, confusing time.

Nude Tuesday is an absurdist comedy about a couple that spends a week at a new-age retreat in a bid to save their marriage. Arriving in an idyllic sanctuary nestled in the mountains, Laura (Jackie van Beek) and Bruno (Damon Herriman) uncomfortably enter a world of laughter workshops, tantric dance, sexual liberation and emotional animals, helmed by the charismatic guru Bjorg Rassmussen (Jemaine Clement).

When new temptations start to take hold, the couple are pushed to the brink, forcing them to look within to find what they really want. But will they ‘bare all’ to get it?

‘Nude Tuesday is one of the most unique films we have ever supported and the incredible creative team have taken their bold idea and executed it wonderfully. We’re delighted for this fresh comedy to reach audiences on Stan and in cinemas,’ said Screen Australia Head of Content Grainne Brunsdon.

Choose your own subtitle adventure

Told in a made-up language (which sounds somewhat like a mixture of German, Spanish and French), multiple versions of the film will be released on Stan – with a Stan exclusive version subtitled by acclaimed Australian comedians Celia Pacquola (Rosehaven) and Ronny Chieng (Ronny Chieng: Speakeasy), and another version subtitled by British comedian Julia Davis (Nighty Night), which will be released in cinemas.

That means you’ll get a different version of the films events depending on where and how you watch it. That’s certainly an innovative way to get bums on seats!

‘The opportunity to choose your own adventure with Nude Tuesday has always been a huge hook and Stan is a perfect place for audiences to experience their favourite comedians in a multitude of ways,’ said Producers Virginia Whitwell, Nick Batzias and Emma Slade.

The film is directed by Armagan Ballantyne (The Strength of Water) from a screenplay by Jackie van Beek and based on a story by van Beek and Ballantyne. It’s an Australian and New Zeland joint production and brings together a slew of very talented cast members from both countries.

Ahead of its launch on Stan and in select cinemas, Nude Tuesday will feature at the Tribeca Film Festival as a Tribeca Online Premiere.

The Stan Original Film Nude Tuesday will premiere 7 July on Stan and in select cinemas from 23 June, 2022.