How do your tastes compare with the world? Netflix is releasing weekly top tens, with huge numbers. What do they mean?
David Tiley 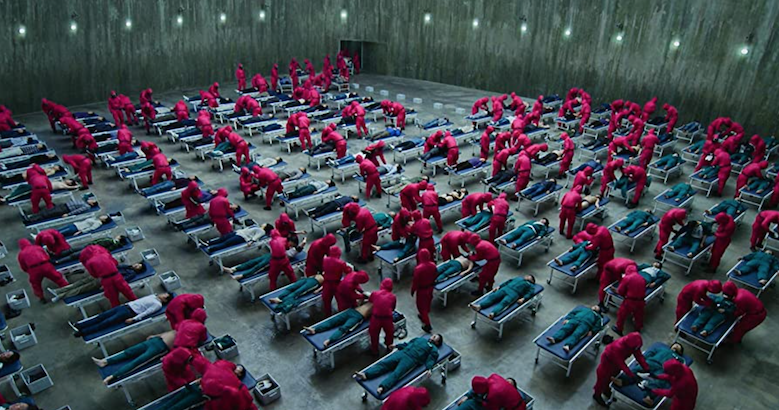 Netflix numbers reveal the wisdom of crowds, which turns out to be a worldwide passion for Squid Game.

To sate our panting demand for comparisons, Netflix is now posting a weekly list of its top ten film and series titles both for the US and globally. Some people would say they are proving we are indeed hard-wired for archetypical stories; others will collapse in despair.

For the week of 8 -14 of November, the top global film was Red Notice, watched for a total of 150 million hours. However, Netflix has around 215 million subscribers, so that is less than an hour per subscriber, so around half the world’s Netflix subscribers watched it. Since the budget was $270 million, each subscriber has currently cost Netflix around $2.50. Ultimately it will be pennies.

Next is Love Hard, a US rom-com directed by Costa Rican comedy expert Hernán Jiménez, which was watched half as much, or around a quarter of the total subscriber base.

But I have to be careful for I am burdened by an intelligent audience. Does two minutes count as a viewing? It seems not – Vox kicked this around to decide that ‘Netflix is simply tracking how much time its viewers spend, in aggregate, with a show or movie. That means, in theory, that two people watching Red Notice, its lousy but popular action movie starring Dwayne “The Rock” Johnson, Ryan Reynolds, and Gal Gadot, would count the same as a single person watching the movie twice.’

How do they know how many people watch it together? They have averages for that sort of thing, probably based on Samba.

Read: Is your television telling corporations what you watch?

Conclusion? These figures are a fair indication of audience for the whole program.

However, we must remember that these charts only cover the top ten in each market. We can guess that shows typically reach this level in week one and then hover around for some time after that. So this is not a record of true performance. What is more, they do not provide numbers for specific territories – everything is aggregated. That means competitors can’t a) watch their own release strategies in relation to Netflix, and b) local suppliers can’t see how they are affected by Netflix. Producers cannot see whether their shows are a nice little earner for Netflix as world of mouth spreads over the weeks.

This protects Netflix’s strategic knowledge, but may also be a contractual requirement from Samba.

Red Notice has the highest first week figure since the chart started on 4 July. Critics were grim, audiences slavered, probably over Dwayne Johnson. It was hugely more attractive than anything else, as only one film, Kissing Booth, touched 90 million and that was back in August. Usually the top slot varies between 30-50 million (roughly) though they seem to be slowly rising on average.

The global English movies are almost all American and all contemporary. Three films are global but not on either the US or Australian lists so they must be some combination of the UK, Canada and New Zealand.

The top five US and Australian are pretty similar but after that we prefer five films which are not on the US list. Instead the Americans add Jump Street, American Gangster and The Holiday, which are all pre-2010.

We like Cold Pursuit, The Gentlemen, Knives Out and Yara, which is an Italian crime film and number one on the non-English list. So we are supporting funkier, smaller bits of popular entertainment.

Passing, an arthouse black and white movie from Sundance about race is on the US list but not ours.

What is happening here?

The PR people have done well in finding key figures for Squid Game, which is a household name around the world. It is the top Netflix Original ever, with 142 million views by late October. Bridgerton is number 2, but with half the views.

In the week of November 14 it is not in the top ten global English language programs because it is not originally in English. However, it is at number 5 in Australia, number 4 in the US, and number one in the non-English top ten.

There are no kids’ shows in the Australian list but two for the US, which may be on Foxtel here. We like a US sitcom called Mom. Only one show in the English language top ten is not from the US, and Arcane is French/American. Except for Squid Game, everything else in the national US and Australian lists are from the US.

But our Australian preferences are still different.

The same applies to the UK, though the TV choices are a bit different. They have three different series of Young Sheldon.

Those non-English figures show us the power of emerging markets in diverse languages. Squid Game sweeps the non-English world by a factor of three; it is only one of four South Korean projects pushed along by the $1.2 billion that Netflix has poured into that production sector. There are three in Spanish, one in Portuguese, and one in Japanese. The single Turkish show under-represents the export power of that sector which is a rising force even beyond the Middle East.

The numbers look big, and they are. But we should remember that the baseline number of possible downloads for a show in each culture is the adult population times 112, assuming 8 hours of sleep for everyone. In the US that adds up to 24.6 billion hours.

Surprisingly few of these titles are Netflix originals, but they are all American, which makes sense in the US. But that could mean less than it seems. In the UK there are plenty of local shows which the audiences prefer, and Netflix can’t have them. In Australia, the case is a bit different.

There is not a vast quantity of Australian drama to sate local appetites. There is not even enough to put a top quality prime time drama on TV, broadcast by anyone, for an hour every night. Netflix is not providing an alternative, and not commissioning high budget Australian shows into the international market which could make a top ten list. We may see momentary breakthroughs reported but there are none in the extended list of top tens stretching back to July 4.

Netflix is not providing an alternative, and not commissioning high budget Australian shows into the international market which could make a top ten list. We may see momentary breakthroughs reported but there are none in the extended list of top tens

By breaking the figures down around language into English and non-English (do you feel odd about that too?) we lose the ability to track English language shows in non-English markets. I would love to see the relative numbers for language groups covered by Netflix, and league tables for minority languages in the Anglosphere… but then I would also love to see them broken out by genre and we can just get more and more granular. I am sure Netflix knows how many people switch from the default dubbing to subtitles, but it is not telling us.

Here’s a thing: We want the streamers to support Australian projects which will play around the English-speaking world. We imagine an export market, like the Koreans or the Turks, backed by streamers. They can’t do that, they can only take advantage of existing infrastructure and latent talent.

They will respond to any legislation exactly as they are doing already, by supporting second level domestic productions for a local market. Unfortunately, no top ten list will tell us if any of those shows get traction internationally.

What do we get from these figures?

Less that we might think. Ordinary television ratings examine what beats what in a bounded system as shows go head to head or set up evening blocks. With streamers, there is never any comparison, partly because titles battle against each other in the same brand, and simply slide up and down to find attentive audiences.

Punters get some sense of what is getting buzz but producers remain starved of useful data.

However, Passing, Yara and Squid Game demonstrate that shows out of the box, hand crafted rather than machine-made, that transcend the formal cliches that dominate streaming, can cut through. In powerful and unexpected ways.