True Colours’ Erica Glynn: ‘Let’s not be polite about this, let’s keep going!’

True Colours is a four part true-crime drama about a small Indigenous community and the suspicious accident that ties them all together.
Silvi Vann-Wall 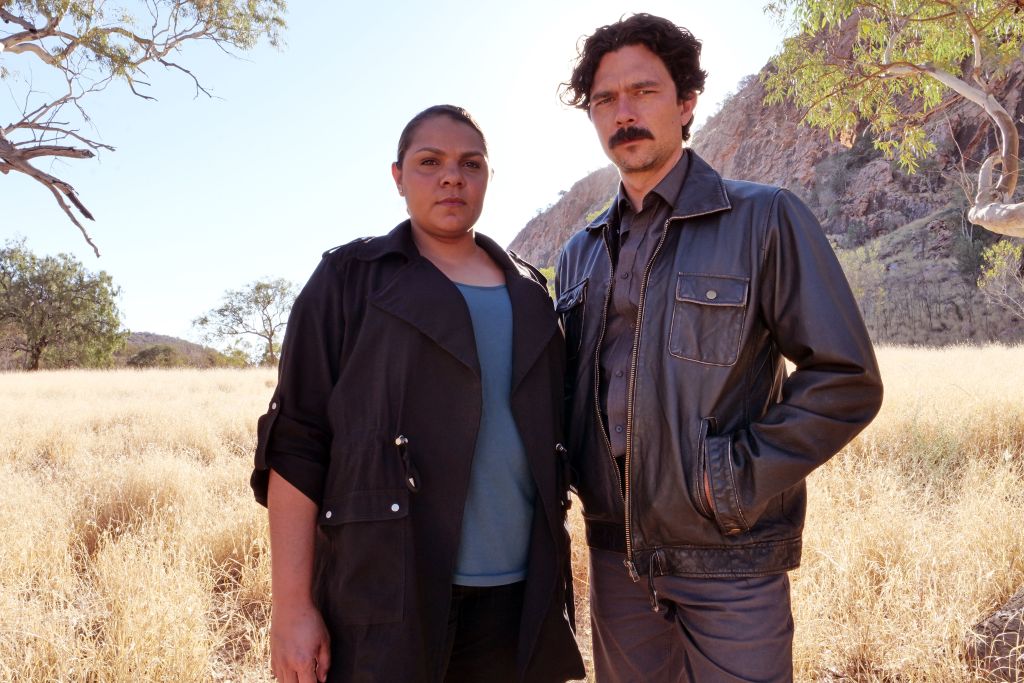 After a long time away, Detective Toni Alma is assigned to investigate a suspicious car accident in her hometown of Perdar Theendar. What was the injured young local woman, Mariah, doing in country closed for men’s business? And who drove the other car whose tracks remain behind hers? Detective Nick Gawler arrives to assist, and with local police officer, Samuel Alma, the three have a mystery to unravel …

And thus begins True Colours, which premieres this NAIDOC week – a new Australian drama series from SBS and NITV. The four-part miniseries is created, written and directed by Erica Glynn and Steven McGregor. It was filmed in the Macdonnell Ranges, east of Alice Springs (Mparntwe).

Hi Erica and Angela – can you tell us a bit about the appeal of True Colours? What makes it stand apart?

Angela Bates: I don’t think audiences will have seen anything quite like True Colours on their screens before. This is a powerful and distinctive story filmed in Amoonguna that features Arrernte language and explores broader conflicts within the NT intervention practices, the dark corners of the global marketplace for Indigenous Art, and ultimately the conflict between colonial law and ancient Indigenous lore – Customary Law. True Colours has all the elements of mystery and intrigue but it’s the cultural lens that makes this story stand out.

Angela, this is the first TV series your department has been involved in I think?

Angela: The First Nations department has a proud history of supporting critically acclaimed TV dramas including Redfern Now, Mystery Road and Total Control, to name a few. This is the first TV drama that we have funded to screen on SBS.

Erica, you created, wrote and directed True Colors. It seems like that’s the norm to wear all these creative hats nowadays – but how do you feel about it?

Erica Glynn: Oh, I love it. I couldn’t imagine it any other way, actually. Even though writing is a difficult craft, and I admit I’m no expert at it, I could never hand over the reigns to someone else. I just couldn’t bear the thought. I mean at some point I’ll have to grow up and do that, but it’s hard to grapple with!

Erica: Warren H. Williams co-created the series, and I wrote it with Steven McGregor and Danielle MacLean.

Steven is somebody who I’ve known for many, many years, and he’s done a lot of amazing things. Danielle and I have worked on many projects together, including sharing a house. They’re both very familiar with Central Australia and have made a lot of content there themselves, so they were the obvious choice to help bring this all together.

Warren was new to me. He came to us because of this burning urge to pitch his creative ideas and also act in them. He brought in the essence of this series. He is also far more in touch with cultural life than Danielle, Steven and I, so he was able to guide us through what aspects of the story would be okay to talk about.

Which didn’t hold us back at all, by the way – he was often the person urging us to push further. He’d say ‘let’s not be polite about this, let’s keep going!’ and because of his cultural authority, we could represent things that the three of us might not have ever delved into.

It’s ground-breaking (in a way that it probably shouldn’t be) to have a long-form drama of this sort featuring not just English but Arrernte language, people and art … how significant is this, do you think, and can we expect to see more film and TV that more accurately reflects and features Indigenous language and culture?

Erica: We always knew it was going to be in Arrernte. You can’t represent the Arrernte community without having the Arrernte language. But none of us, myself included, could write in Arrernte. We had to write True Colours in English and get it translated by people fluent in the language.

We had a lot of senior Arrernte people embedded in the production process from the very start, who helped shape the dialogue and the acting. That ensured we got the representation as accurate as possible.

Angela: To see ourselves reflected on screen authentically and have First Nations languages spoken is incredibly empowering and important. I would love to see more First Nations stories feature Indigenous languages. The popular children’s series Little J & Big Cuz on NITV features Indigenous languages of Gija, Noongar, Torres Strait Creole, Palawa Kani, Warlpiri and Djambarrpuyngu and to have this content for Indigenous children to engage with and learn from is invaluable.

I expect we will see more film and television projects featuring Indigenous language and it’s something I’m really proud our screen practitioners are working to include.

Erica: I think it’s important to represent all of those aspects. I think Australia is doing a much better job at being open to understanding that Aboriginal and Torres Strait Islander communities are complex, and they are not ‘one note’, and that there are different perspectives. Different filmmakers bring to the screen their experiences of their Aboriginality, and that is diverse.

One aspect of Aboriginality is the ‘bush’ or rural communities that perhaps haven’t been represented enough in a contemporary sense. We’ve seen it represented in a historical sense more often. We need to see these different takes because we are not just ‘the dream time’, nor are we completely devoid of culture.

It’s layered and complex. I think this series will bring a greater understanding of our culture not just to Australia, but to the world.

What was the most difficult aspect of getting True Colours made?

Erica: You’re going to get a different answer from different people – for the producers, it’s probably finding the bloody money! But I’ll say it’s all difficult and it’s all fun.

There was also a bit of hesitation around the kind of story we wanted to tell – because it’s contemporary, it’s different, and especially because it’s told in two different languages. There is always a fear that lies within me about people not being able to see past the language and the subtitles, and I worry people won’t even bother checking it out.

But viewers seem to have no problem watching the latest hit TV in Korean, German, Japanese …

Erica: Exactly! I had to raise that point on a number of occasions. There is always a factor of making content digestible for audiences, and subtitles are always brought up as a barrier, but we know that that’s not true anymore. We know that that is just a bloody lie, actually. People love it.

Read: Anglo-centric film culture and the continuing resistance to subtitles

Angela, on starting your role at Screen Australia in 2021 you said ‘There’s never been a more exciting time to be a First Nations creator in the screen industry, with the global appetite for our stories growing at a thrilling pace.’ Could you maybe talk to this a little, please? True Colours is a great current example about this but where – and how – else are you seeing these exciting stories, and appetite for them, coming to light?

Angela: I stepped into this role incredibly proud of the work those in the department had done before me. Next year our department will celebrate its 30th anniversary. It’s no accident that the two major TV dramas premiering now are First Nations stories. It’s the culmination of 30 years of support and a commitment to developing pathways for First Nation filmmakers to be able to tell their stories.

Mystery Road proved how First Nations stories can travel the world. Mystery Road series 2 was Australia’s highest-rated adult TV drama of 2020, and was listed by The New York Times in the Top 20 Best International Shows of the year. Series 2 had its world premiere at Berlinale. It also screened on Accorn in the US. Total Control had its world premiere at the Toronto Film Festival. These stories no longer just appeal to local viewers but global audiences too.

Is there anything else you’d like to say about this great-looking show?

Angela: I truly believe that we are living in a golden age of television. True Colours is testament to that. It’s must watch TV and Rarriwuy Hick leads an outstanding cast in this compelling mystery with culture at its heart.

What’s on your plate for the rest of the year, Erica?

Erica: I’ve got a whole lot on actually. I’m developing a feature I’ve been asked to work on. At the moment, I just want to sit back and get my head back into creation mode. I’m looking forward to the next six months of doing just that.

True Colours airs over four consecutive nights during NAIDOC Week, from Monday 4 to Thursday 7 July on SBS and NITV