MIFF brings a pile of film-maker inspirations into your lounge

The online version of the Melbourne International Film Festival tumbles out to its national audience, with a mix of ticketed viewing and streaming rolling out across August.
David Tiley 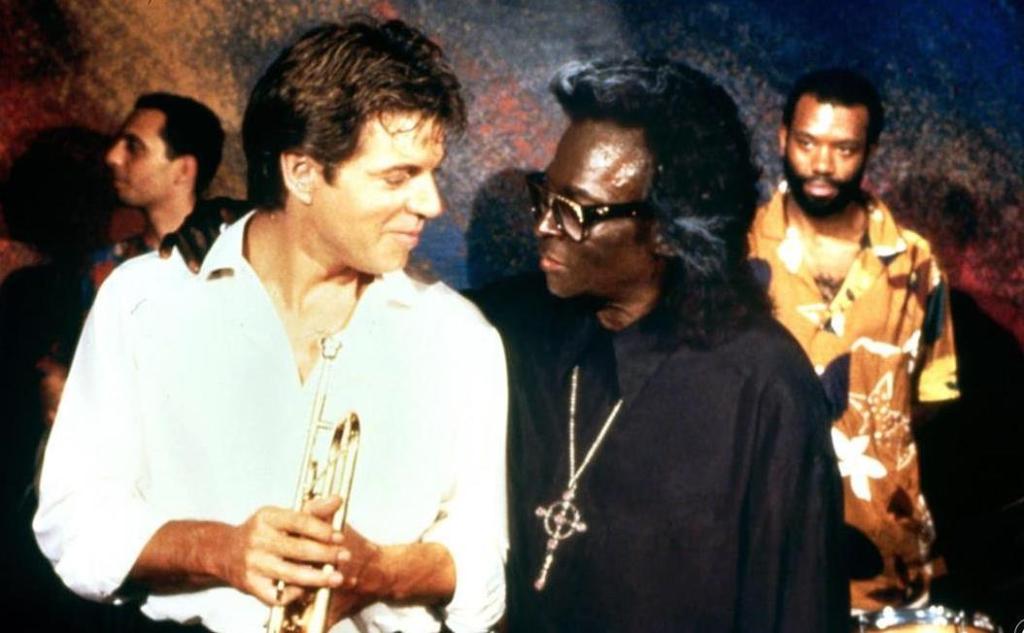 The Melbourne International Film Festival now takes on the opportunity to delight Australian audiences desperate for arthouse content. Once again, it bids for a certain kind of grandeur. Even the online launch moved an impeccably dressed Al Cossar around iconic parts of the Forum Theatre as he romped through the program in a teleprompted cascade of adjectives. He is very good at it.

The festival has been cut back hugely from nearly 400 films to around 60 features and 44 shorts, but still runs for 17 days. It keeps the opening night, mid-festival gala and closing night appointment viewing, while everything else is streamed. Programs like the shorts are free though most are ticketed.

‘I try to be pretty particular about my words,’ Cossar tells Screenhub in an interview. ‘There’s always the challenge of trying not to say the same thing so quickly in a row so people can tell the difference between films, so hopefully that came across.’

Unlike the Sydney Film Festival, which focused on the shorts and documentary prizes with their strong local content, the Melbourne program is infused with its traditions. ‘It is definitely a director’s festival,’ says Cossar. ‘It is absolutely a cinephile festival, true to the nature of our programming and what our audience expects of us.

‘That said, there are very enjoyable opportunities for people at stage three lockdown on their couches that make sense in screening terms to people in this particular situation.’ In other words, they are fun with a light touch and a deeper core.

For a Screenhub audience, this is the key question. Cossar offers The Black Bear, directed by Lawrence Michael Levine, regarded as an important New York indy filmmaker with partner and collaborator Sophia Takal. Reviews after its Sundance launch emphasise a stunning performance by Aubrey Christine Plaza; the film is about a blocked filmmaker who stays with a couple in a mountain house as they play havoc with each other.

As Cossar explains, ‘I think it’s sometimes a pretty amazing black comedy, but it’s also a film that gave me stress palpitations. It has a lot of economy in it, kind of a three hander between the three actors and they’re an amazing ensemble. It turns very, very meta, and it suddenly turns into something else very, very different. So in terms of a film that is succinct and efficient and has a lot of ideas and awareness of what it does, I think it is a great film for filmmakers to look forwards to.’

In the absence of a trailer, here is the Q&A at Sundance.

First Cow is described as a revisionist western from the Pacific Northwest, directed by Kelly Reichart, who Cossar regards as one of the most interesting directors working today.

‘She’s a filmmaker that’s very eloquent. It sounds very gentle, her films are very knowing, very thoughtful. It’s story about friendship. It also has some political points to make about the underlying mythology of capitalism if you want to get down to those kinds of mechanics but it’s a really enjoyable buddy movie which has this real kind of graciousness about it,’ he explains.

At the moment Australian artists are engaging with the frontier as a hell-hole of slaughter and genocide, confronting the notion of plucky pioneers in a benign empire. First Cow is very different, suffused with a sense of landscape, detail and mutual regard. It sells itself well in the trailer.

Wendy is the second feature film by Behn Zeitlin, who made the arcadian film about a child with imaginary monsters in the Louisiana bayous called Beasts of the Southern Wild in 2012. The picture came from his filmmakers’ collective Court 13, was based on intense immersion in the culture and used non-actors, all to create a heap of attention at the time.

Wendy is a re-imagination of Peter Pan, again with children in a fantasy world. For filmmakers it is provocative step into magic realism, a path which is being explored more and more in our world.

At first glance the festival is thin on Australian films, not surprising given the shambles created by COVID-19. But I am wrong.

Ellie and Abbie (& Ellie’s Dead Aunt) is summarised as ‘School is a breeze for overachiever Ellie, until she starts fancying rebellious classmate Abbie. To win her heart, Ellie will need to pull out all the stops – including accepting the advice of a ghostly relative-turned-cupid.

Written and directed by Monica Zanetti, produced by Patrick James and Maveen Shahraki, and made in Sydney, it stars ‘Wentworth’s Zoe Terakes. The festival sees it as is an incredibly sweet comedy-drama about family, acceptance, generational difference and the rollercoaster of adolescence, with nuggets of Australian LGBTQIA+ history thrown into the mix.

‘Prepare to have your heart warmed by this charming feel-good story of coming out, coming of age and crushing real hard.’

Zenatti is known mostly as a producer and writer, though this is her second feature after Skin Deep which did well at festivals and was released outside Australia in 2016.

Paper Champions, shot in Geelong (VIC) inside the Polynesian community, is described as a playful rom-com. It was made by a hive mind – writers are Luke Saliba, Michael Sullivan and James Pratt while it was produced by Tom Harberd, Phil Hunt, Tessa Mansfield-Hung and Alexandros Ouzas. It was directed, singly, by Jo-Anne Brechin and contains a worrying cameo by Gary Sweet.

‘In Polynesian cultures, mana refers to strength, confidence and an ability to influence situations for one’s gain. Unfortunately for Rey, a reserved, routine-loving photocopier salesman, he seems to have lost his – and just as he’s started falling for a nurse he’s met by chance. As his family, co-workers, Spanish dance teacher and an ex-wrestler all try to re-engineer his lost moxie, could a mojo makeover be enough to ignite a romance waiting in the wings?’ said the program.

The festival provides a rare opportunity to see the premiere of NITV commission Looky Looky Here Comes Cooky on the big screen. Or it would, if we didn’t have COVID. So the audience will content itself with that spark of smugness which comes from seeing a great show first.

Written and directed by Steven McGregor and Danielle Maclean, produced by Stephen Thomas, Anna Grieve and Kathryn Symons, Looky Looky, Here Comes Cooky is a sixty minutes unsolemn documentary. It is full of Indigenous singer/songwriters with Steven Oliver as he explores the Cook legend from the perspective of the actual owners of the apparently empty lands he revealed to Europeans. No trailer, sadly.

Dox and a special treat

The Plastic House is a short experimental feature doc made in Khmer. It is an Australian film by Allison Chhorn.

The Meddler was made over seven years by Daniel Leclair and Alex Roberts in Guatemala. Made in Spanish it is officially Australian.

The Letter is a Kenyan documentary about an old woman accused of witchcraft, and directed by Maia Lekow and Australian expatriate Christopher King.

The Karrabing Film Collective, thirty strong, is back with Day in the Life, described as a ‘hip-hop-infused visual kaleidoscope that blends together filmed footage, archival audio, music and media clips, as they chart a day in a remote Aboriginal community and the unrelenting experience of marginalisation. Uncompromising in its vision, the film further cements Karrabing Film Collective as some of Australia’s leading artists and filmmakers.’

The Sydney Film Festival attracted a lot of attention to The Leadership, made by Ili Baré, The film is led through its story of challenge, power and doubt by Australian Fabian Dattner, an expert on corporate leadership battered by her own brutal failure in the fashion trade. She takes 76 female scientists from around the world on a voyage to Antartica, in a rolling encounter group which soon transgresses against the natural protective mechanisms of extremely capable women surviving in a world of poisonous discrimination.

Swedish writer, film critic and filmmaker Jane Magnusson ‘follows the exuberant Madeline Stuart all the way from Brisbane to the catwalks of New York Fashion week and beyond. As a supermodel with Down syndrome, Maddy and her mother Rosanne work for inclusion; work to challenge perceptions of beauty; and work for change within the heights of the global fashion industry from the inside out.’ The picture is called Maddy the Model.

The treat is a restored version of Dingo, made by Rolf de Heer with a rare cinematic performance by (gulp) Miles Davis.  It is a pity this is not live because it would be old home week for de Heer, writer Marc Rosenberg, and producers Giorgio Draskovic and Marie-Pascal Osterreith. It was shot by Denis Lenoir, edited by the late Suresh Ayer and composed by Davis and Michel Legrand. Lead actor, the rural trumpeter in search of his idol, is Colin Friels.

You can buy individual tickets, or prepacks of ten for $115, along with special clumps of three for $35 or two for $25. Interstate users will need to realise that MIFF members can buy tickets now, while the public gets through the digital door on Friday 17 July. The big events are sold separately and shorts are free.

This is important because there are limits to sales depending on deals with IP owners and the Classification Board.