The Melbourne International Film Festival, known for its commanding sprawl over 17 days, has gone boutique, digital and national in a huge internal rebuild.
David Tiley 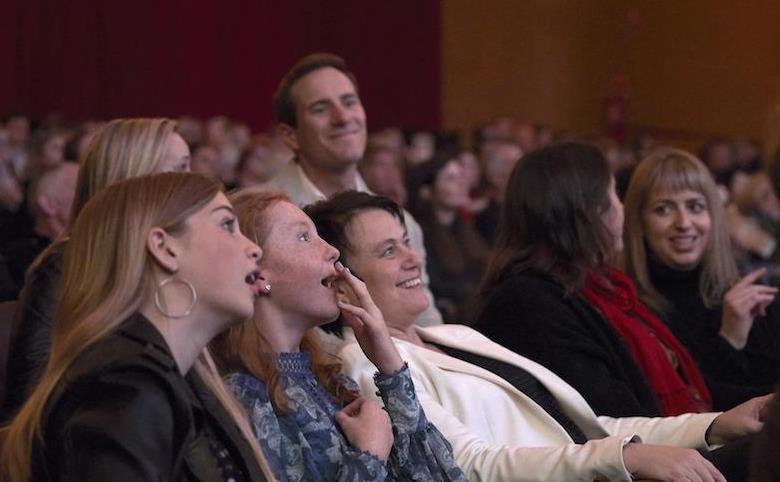 Not this year – Daisy Axon sees herself on screen at the Kids’ gala of H is For Happiness in 2019. Image: MIFF

The Melbourne International Film Festival has announced an online version of their 69th festival due between 6-23 August. Called MIFF 68½, it will contain around forty features and 30-40 short films.

According to Festival Director Al Cossar, ‘This project is to make a positive contribution to our audience in the middle of a really difficult situation, when the world is more distant and disconnected.’

Cossar and the team are rebuilding from the ground up, dealing with tricky challenges like securing a formal variance to the censorship regulations so they can stream material without ratings. They are building the system with Shift 72, which is also being used by SXSW in Austin and CPH:DOC in Denmark.

They are co-operating with other major festivals working through the same changes, in what Cossar calls a collegiate international response. The dilemmas about rights can be acute, as filmmakers work out whether they want to use this home viewing option, to hang on until 2021, or simply go sideways into commercial streaming.

The MIFF Premiere Fund was expecting to launch several films, which can no longer be given the same splash of publicity The role of these films is currently under discussion.

The program is still being devised and will be until the release date of July 14. The festival is looking for ways to present a reduced program of panels, to livestream overseas guests and to find ways to channel audience responses into active discussion.

In the shorts arena, programs will be curated around drama, animation, documentary and experimental, which will compete as always for MIFF awards.

The Critics Campus program will proceed and mutate. It may be more at home in a social media environment, since the published pieces run online anyway and can be supported by more live commentary.

The balance is going to be difficult as Cossar works with a much smaller palette. ‘We need to be true to our curatorial intention and rigour,’ he says, ‘and accomodate our diversity. We will program some films which are broadly popular with others which are formally challenging. It is a really interesting balancing act and we have to think very clearly to find films which suit the streaming environment.’

He expects to make 90% of the festival program available as pay-to-play over the period, spotlighting five or six films with session dates and times so they are foregrounded as a gala substitute. Expect to find the program anchored with formal launch and finale films.

MIFF has been working on a philanthropic strand for a number of years, which has now become very important as the financial structure of the festival changes very quickly.

The festival has received what it calls ‘the most significant philanthropic gift from a private donor in the festival’s 68-year history: a generous donation from Melbourne-based film producer, businesswoman and philanthropist Susie Montague. This sets the scene for a broader fundraising campaign, now underway.’

Rachel Griffiths is on board as the first Festival Ambassador for 2020. Montague is active as an owner in horse racing circles, has supported some shorts and was the executive producer on Ride Like a Girl, in which she worked with Rachel Griffiths. This time, the outlay is purely philanthropic.  For the new MIFF chair, Teresa Zolnierkiewicz, this must be a valuable start to a challenging campaign.

Like the other festivals, this version of MIFF is effectively national, geoblocked to Australia.