The documentary filmmaker behind 'Gayby Baby' and 'In My Blood it Runs' explains a truly collaborative and consultative approach with big impacts in mind.
Rochelle Siemienowicz 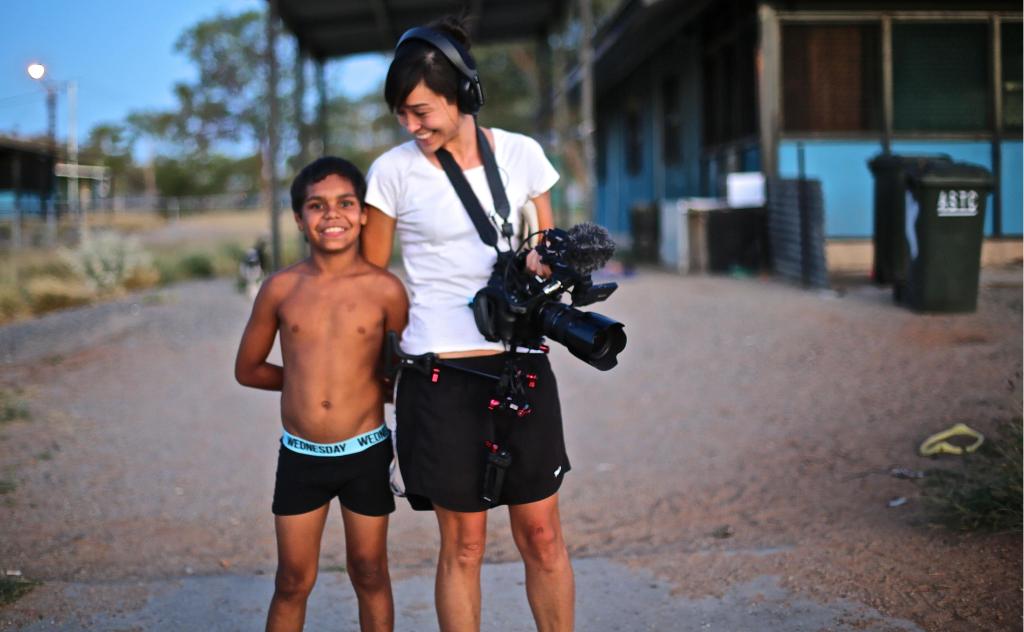 Shot at dusk on a street in Alice Springs, the opening scene of Maya Newell’s In My Blood it Runs is intimate and cheeky. We see an Indigenous mother looking straight into the slightly wobbly lens, answering her child’s questions about himself. The love between them – and also her concern for him – are palpable.

The 10-year-old Arrernte and Garrwa boy holding the camera is Dujuan Hoosan. Both he and his mother, Megan Hoosan, are credited as ‘collaborating directors’ of an observational documentary that was made with a clear social purpose. Turning these subjects into active credited participants in the filmmaking process is just one example of the film’s deep collaborative and consultative approach. Other members of Dujuan’s family and community are also named as collaborating directors and advisors in a project that sets a gold standard for non Indigenous creatives working with Indigenous stories, as well as for documentaries wishing to impact policy and create wider social change.

A better way of working with Indigenous communities

Building on the pioneering work of many Indigenous filmmakers and the team at Screen Australia who developed the Pathways & Protocols guidelines the In My Blood It Runs team has developed a strong framework that guides their approach. Newell says the development and articulation of these principles owes much to the input of the producers: Rachel Naninaaq Edwardson, an acclaimed Iñupiaq/Norwegian/Sami filmmaker; Sophie Hyde, of Closer Productions, a company well known for its groundbreaking methodology (52 Tuesdays); and Larissa Behrendt, an Aboriginal Australian legal academic, writer and documentary filmmaker (After the Apology).

The key tenets of the approach include: partnership with and sharing of creative control to those represented on screen; having a senior Indigenous advisory team; shared profit and ownership; an ongoing duty of care; long production timelines allowing for detailed, frequent and authentic discussions with advisors, collaborative directors and community around story, style, approach and process; and a strong impact strategy lead by the families in the film, the advisory council, key community leadership and key partners and messaging for distribution and exhibition.

‘We made this film in a really important way, which should be the norm, but sadly isn’t despite many years of advocacy from Indigenous filmmakers,’ explains Newell on the phone to Screenhub from Alice Springs on the morning of the film’s outdoor premiere in the hills of the Hidden Valley Town Camp, where some key opening scenes were shot. ‘We were led by one of our producers, Rachel Naninaaq Edwardson, who brought incredible consultation models to the project. This meant that we were sitting with the family before we started filming, and throughout the whole shooting and rough cuts and fine cut process. They were able to watch footage and talk about what they did want and what they didn’t want in the film, and they knew they could pull out at any time.’

Producer Rachel Edwardson added by email that,‘As a mixed team of non-Aboriginal and Aboriginal filmmakers we had to draw together a robust model of working that gave agency to the families and communities whose stories are being told on screen.  This required us to become aware of the history of appropriation, racism and abuses in the film industry (and beyond) and how that history impacted ourselves and the context we were wanting to work in.  Only then could we hope to appropriately utilise robust tools of collaboration and build authentic relationships of agency with the family, community and leadership of the countries we were working on. In doing this we looked far and wide both locally in Australia and overseas and drew on not only our work and experiences but on established best practice models of collaboration and agency.  These models of practice, and those communities and practitioners who developed them, rarely get attention in the industry and are tools of protection Aboriginal and diverse filmmakers have been fighting for decades.  It was really important for us to not only ensure we were honoring this work by bringing it in to this project but to also place ourselves in this long line of work, because to ignore it would have been to perpetuate the very history of appropriation we were aiming to uproot.’

This sounds like a nightmare for control freaks and filmmakers on tight timelines, but Newell says, ‘It was very important that this was a story where the agency and creative control sat with the family and the filmmakers in collaboration.’ What this meant in practice was that, ‘we were showing footage directly after it happened and engaging in conversations about what it would mean locally and nationally, to have that story out there. This meant that there were no surprises by the time we came to the edit, and there was always a strength-based reason for including anything tricky.or sensitive.’

As for whether subjects could pull out at any time, Newell says that is something that should always be on the table. ‘It’s always a risk and I would hope that all documentary makers would take than on as part of the gig.’

Clearly this process took took a vast investment of time and energy. Not just the three years of actual filming, but the many years before that when Newell was engaged with Alice Springs communities making short films with and for them, a process that built trust and rapport. Newell says her commitment will probably include a lifelong responsibility and duty of care long after the film is archived and forgotten.

‘It’s the only way. It does take a lot of work,’ she says, ‘and a lot of the systems in the film industry don’t often allow for it, but it was very important for us to represent the communities properly, and Sophie Hyde and Closer Productions were a key part of allowing us to do that and creating space from deadlines.’

Representing and Advocating for Children

Newell met Hyde at a Q&A screening of her previous documentary feature, Gaby Baby (2015). Hyde was moderating the session, and the two filmmakers hit it off immediately, both sharing the fact of being children of gay families. Representing children of those communities with sensitivity and accuracy was a key impetus for Gaby Baby, which became part of the national conversation leading to the legalisation of gay marriage.

Now, In My Blood it Runs looks set to become part of the push towards raising the minimum age of incarceration of Australian children from 10 to 14, and also the transformation of the education system for Indigenous kids. Dujuan, the boy at the heart of the film, at 12 years old was the youngest speaker to address the United Nations Human Rights Commission about the issue of child incarceration. Right now, aged 14, he’s on his way to accompany the film to Canberra, where it’s being screened to politicians on both sides of the fence. Being part of the documentary has no doubt changed his life and chances.

In a shocking statistic shown in the documentary, 100 per cent of the children incarcerated in the Northern Territory at the time of filming were Indigenous, with some as young as 10. Dujuan narrowly escapes this fate, thanks mainly to his proactive family sending him back to country, where we see him fishing, swimming, hunting and bonding with his father.

‘In every other western country the age of legal incarceration is 14,’ says Newell. ‘That’s the international human rights standard. And when we screen it in Parliament and around the country, we want people to see that resources should be put into Indigenous housing and upstream models of education instead of putting it into the justice system.’

In some excruciating and eye-opening scenes in the film we see Dujuan in the classroom, with various teachers failing to keep his attention. He plays pranks and runs away from school, an unsurprising fact given that the material he’s taught is either completely irrelevant to his day to day life, or outright disrespectful to a history of First Nations dispossession.

Newell says there is incredible work being done by teachers across the territory, and she never wanted to criticise individual teachers or schools, but wants to change the system at large. ‘I come from a family of teachers and I’d love to be making a film about how tricky it is to be a teacher working in this space without the support that they should be getting on a systems level to be teaching in a culturally safe way.’ What she hopes is that, ‘people watching the film can see beyond individual teachers or schools and see this as a systems issue, with how we talk about history in this country, and also how the education system could be adjusted for schools and teachers to be able to do their job better.’

Australia lags about 30 years behind other many countries in its First Nations led education, according to Newell, who cites New Zealand, Hawaii, some parts of Canada and the US as examples of places doing it better. Indigenous kids here, she says, ‘just want what other children in Australia have which is to have their first culture taught and prioritised in their education.’

Supporting the film with Impact Strategies

Asked whether she always intended to make documentaries with social effect, Newell says, ‘I think most documentary filmmakers are attracted to the form because there’s an opportunity for social change through story.’

The job of impact producer barely existed five years ago, and now it’s a key role on any documentary with purpose. It wasn’t until Newell was introduced to the Good Pitch model in 2016 with Shark Island and Documentary Australia Foundation, that she realised, ‘Not only could you make the film, but you could also support it with impact strategies.’ She credits ‘the amazing contribution of Alex Kelly, our impact producer, who has worked on campaigns like Ngapartji Ngapartji, where they achieved an Indigenous language policy in Canberra. Having that thought leadership on our own impact campaign was very important.’

With impact partners that include Amnesty International, the Australian Human Rights Commission and World Vision, the ‘Change Goals’ for In My Blood It Runs are set out clearly on its website, with clear calls to action for interested viewers. This is the world of documentaries that set their sights further than festival screenings and awards. On a clearly pragmatic level, it’s a key way to build audiences and extend the life of a film project.

Asked for any final advice for young filmmakers, Newell says: ‘The most important thing is to trust your intuition and your moral code of ethics when you’re making documentaries. Don’t be afraid of doing things differently from the way the status quo tells us to do them.’

For her thoughts on the big issues facing Australia’s documentary filmmakers, here’s a great little interview with Screen Australia:

In My Blood It Runs is in national release from 20 February 2020.