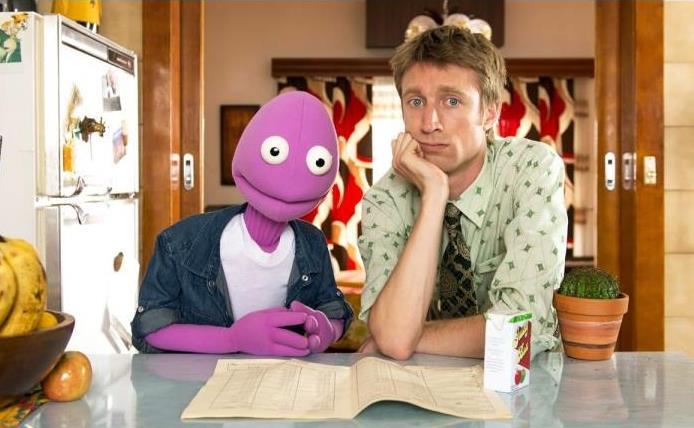 Sammy J and Randy working out what to do about the new regulations. Image: ABC

‘Hi everyone, um, I’m a bit emotional after the announcement this morning so please excuse me if I burst into tears as I talk. But I’m a screenwriter and I’m here to talk to you a little bit about the process of coming up with an idea for a show, and writing a series before a camera even starts rolling.’

Mithila Gupta was speaking on Zoom at the launch of a new version of the Make It Australian campaign on the very day that the federal government announced its new policy settings to regulate/cut the screen sector. The campaign, run by the sector’s representative bodies, builds on the first version of 2017 to locate screen media in the Covid recovery process.

Despite some temporary extra financial support from the federal government, the message is: don’t quit, think differently, the fight has just entered a new phase.

As Rhys Muldoon moderated the session, Mithila Gupta, set dresser Paul Stanley and actor Shareena Clanton aka Doreen Anderson on Wentworth described their jobs and the impact of the changes to introduce the campaign to a wider audience. It was lovely for its own sake, and is really worth watching. And the mix of people emphasised the power and essential rightness of diversity.

We are a bunch of small businesses

The story really blew up in part two, starting at 26.10, with the introduction of Kate Carnell, the inaugural Small Business and Family Enterprise Ombudsman, known to many as the former Liberal Party Chief Minister of the ACT, a CEO of the Australian Chamber of Commerce and Industry, a prominent pharmacist and a daughter of an accounting family.

That was a smart move because she simply treated the whole problem from a small business perspective, which is refreshingly different.

She is also a board member of the Australian Made campaign–’that little triangle with the kangaroo in the middle’ as she described it. With a 600% increase in hits on that website, she claims that Australians are getting the point.

They are saying, ‘We actually care about our country, we actually want our country to prosper. We understand that things are pretty tough right now. And we understand that one of the ways we can help Australia get back on track and people back into jobs is to embrace local content, local products, local services.

‘The Prime Minister is saying that  budget is about jobs, jobs and jobs, and then more jobs. He’s talking about the importance of small businesses in terms of creating those jobs, because that’s what we do in the in the small business space. It’s usually good when you’re talking to politicians on all sides to use their rhetoric, to be talking inside their space. And you guys have got a great story about the sort of jobs that are created, the predominantly small businesses that exist in this space. The Australian Made campaign and other things I am involved with spend a lot of time making sure they know about that.’

‘My concern is, is that our policymakers are yet to quite understand a range of the things that you’re that you’re talking about now.’

Small dogs in a big fight

Here she is talking about a central contradiction in the Liberal attitude to the sector. On the one hand, the Conservatives promote the story of plucky, entrepreneurial small businesses who just want the freedom to succeed. On the other, those indies of capitalism are up against the power of major players to control the market, so a true indies supporter like Carnell’s Ombudsman office strives to prevent bullying and anti-competitive behaviour.

On the one hand, the Conservatives promote the story of plucky, entrepreneurial small businesses who just want the freedom to succeed. On the other, those indies of capitalism are up against the power of major players to control the market…

This is a problem here because the broadcasters, who are actually very large, are crying victim while they degrade the small business market opportunities in their sector. It is tricky to handle, and Carnell argues that they are genuinely suffering.

So governments try to play umpire. As Carnell said, ‘The Coalition understand and embrace level playing fields. I think you’ve got a really strong argument in terms of the power imbalance, where power exists in one space and not another, which impacts upon the capacity of small business to grow and prosper and to employ people.

‘It shouldn’t be different rules for different parts of the market–the streaming part of the market. As Paul Fletcher says in his media release, we want to begin to rebalance our regulatory framework to provide the opportunities for Australians to access Australian content over a broad range of media, whether it is free-to-air or subscription TV or streaming services.

‘The problem then is how do you deliver on that. In a way that not just protects but empowers creative small businesses to grow and employ. There’s a lot of jobs in your industry.’

Tracey Vieira, formerly the CEO of Screen Queensland and now Head of Content at Hoodlum Entertainment, waited patiently to add a really fundamental point. At the moment, the feature sector has clearly been whacked, TV production has improved its tax support, and Screen Australia has some more money, though the details are not clear. There is a sense of winners and losers, so the sector could turn on itself.

Know your friends, stick together

‘I’ve been watching the chat as I’ve been sitting through all of this,’ she said. ‘And I think it’s really important that we don’t turn on each other, that we don’t turn on our agencies. Because they’re absolutely critical. They can’t advocate for themselves. And they’re often dealt the hand that they’re given. And that also includes the ABC and SBS who have had massive budget cuts.

‘We need to advocate together to make change, because we are just individuals, we are just small businesses, we’re not big corporations with lobbyists who can go and do this work for us. And I think it’s absolutely critical now in terms of our union representation, in terms of SPA, in terms of the Writers Guild, looking after our agencies and advocating for them both on the state level and on the federal level, and making sure that we pull together to make this change happen. Because we’re not a big player in this unless we’re doing this together.

History is made by visionaries

Mithila Gupta had the first words in this account, and it is fitting we give her the last. They are very positive.

‘I have always aimed to write specifically for the Australian market’, she said. ‘Over the last ten years, I’ve seen a really great switch where Aussie TV is becoming globally facing, which I think is a great thing because it means more eyes on screens. And that’s actually allowed me to be a bit more ambitious.

‘So now I am sometimes thinking of ideas for specifically, for instance, in the Indian market, but they are still rooted in the experience of an Indian community in Australia. That’s the specificity, it’s where that becomes  really relevant. And also to that point, there’s been a cultural shift I’ve seen since starting out at Neighbours, I was the only brown person in the room.

‘Since then, over the 10 years, there have been shows like The Heights  and The Unlisted where there’s been an agenda to give emerging and under-represented voices a stage. It’s very slow. It’s kind of steady there. And I think we’re getting better and better. And I would hate to see that halted now, like, that would just be such a shame because I still don’t think we’ve heard from many voices that need to be heard’.