For production designer Felicity Abbott, Ladies in Black was a wonderful research project, with glamour and added lawyers.
David Tiley
[This is archived content and may not display in the originally intended format.] 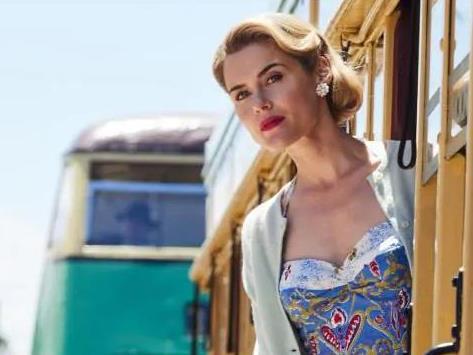 There is a special challenge in period films set in times of major cultural change. They are even more interesting when the period is recent, and the generations in the audience will see it in different ways.

Ladies in Black is a fascinating example. The film is set in 1959, when director Bruce Beresford was at Sydney University, around the edges of the milieu. Madeleine St John was there too, long before she wrote the book in the 1990s on which this film is based.

Read more: Ladies in Black – triumph of the veterans (paywalled).

It has taken around 25 years for Beresford to bring the story to the screen. It is a wonderful opportunity for a director because it is about the culture and the context as well as the story. The clothes and the department story are characters in the story; the picture is about the mis en scene.

Veteran production designer Felicity Abbott was brought in early, and had already done a large amount of research in the hope that the film would be mounted.

‘I started research about a year out before it was financed,’ she said on the phone, ‘just looking at department stores around the world. There’s a lot of great archive and documentation.’

The passion for fashion

The colonial history of fashion is taken for granted by screen storytellers. Ever since the First Fleet, women of a certain class hungered for European fashion. Year after year the storm-worn ships brought catalogues and magazines to be shared and copied. immigrants were interrogated for their knowledge of new styles by eager women stuck in the time warp of last year’s sensations.

Into the twentieth century the magazines carried photos, more Australian women travelled and the haute couture industry became an enormous institution. Department stores, partly driven by mail order, became finely tuned emporiums of the modern, with childcare, elaborate lunches and funfairs on the roof. The glamour of the 1920’s took a pounding in the Depression.

By 1959 Australia was emerging from the long gloom of post war shortages. A new generation of young women, eager to move forward, were having their debutante balls while their mothers relished the chance to look smart and feel successful. Powerful department store buyers were shipped off to Europe each season, to bring the latest lines and ideas home, betting their budgets on millinery, high heels and underwear.

Places like the Myer Emporium, Grace Bros, and David Jones became landlocked liners, dazzling with light, cash whooshing around in pneumatic tubes. Carried upstairs in the creaking lifts, greeted in refined quiet, perhaps with a grand piano, middle class women would be pampered, and view dresses and styles worn by house models like human mannikins.

Felicity Abbott’s challenge was to recreate this experience exactly for a fictional department store based on David Jones in Sydney.

‘‘It’s the designer’s dream job’, she said. ‘It has been a personal fantasy of mine to be locked up in a department store for a night.

‘Nothing exists any more and everything is renovated to hell. It was very difficult on this budget level. David Jones informed the set with their fifties floor ladies, cocktail frocks and very expensive high end model gowns. It is like a car showroom. People sit with their dogs and the models parade around.’

David Jones was a classic department store on European lines. On top of this armature the design team found ways of creating an Australian level which affected the decorations, the motifs, the lighter fabrics and the effects of climate.  Christmas in summer brought chaos. Before air conditioning, fans blew hair away and sweat made mascara run. We can imagine how the pale glamour of high fashion collided with girls who were better fed and more physical, used to swimming and sunshine.

Beyond the bubble of fashion, people were making and repairing their own clothes, working from paper patterns on their Singer sewing machines at the kitchen table after the tomato sauce went back into the kitchen dresser.

The story is about Lisa Miles, a young woman from the suburbs, dressed lovingly by her mother in ghastly frocks, who comes innocently into high fashion. She enters a culture of working women who have outwitted the sexist push to keep them in the home. They were servants and mediators inside a female enclave in a divided society. Here European migrant women found a place translating between the local culture and the world outside. In their high heels they saw themselves as very classy while they waded in the mud of provincialism.

‘This is absolutely relevant,’ said Abbott. ‘Fashions and designs in Australia were a good ten to fifteen years behind the world in general – and a couple of seasons in terms of high fashion. We were adding a very special cultural layer dealing with a person stuck in Australia in terms of couture, just pre the emerging Sixties.’

On this show, Felicity Abbott worked particularly closely with art director Sophie Nash, set director Katie Sharrock and costume designer Wendy Cork because the film was about clothing as worn, sold and displayed.

Said Abbott, ‘Production design and costume design is inseparable – everything about the mannikins apart from the clothes is the responsibility of the production design department, in our style for the sets.

‘I create the palette for the show. As it is period, my approach is to have a logic, creating a distinctive colour for each, which changes to create a visual narrative for the character.’

‘The story reflects the migration from Eastern Europe and the Continental glamour we were starting to appreciate. That is what I loved about the book, and Bruce has the pitch perfect blend of comedy and drama, right down to the quips about Melbourne and Sydney.’

The journey of the characters is very much reflected in the architecture. Lisa’s parents live in a plain red brick home, while the Europeans rentaround the harbour in places like Balmain, where Beresford lived at the exact same time. Abbott cruised the modern city with her sketch book, re-examining suburbs which have changed enormously over sixty years.

‘How the spaces we live in and how we create them affect us. We are building the emotions through colour and placement and creating visual narratives to provide insightful relationships with the space that characters are living in.

‘We are providing a language. The job of a production designer is to create a visual narration that quietly sits behind the narrative. To me that is what visual poetics is. The Miles house is austere and controlled while the Julia Lamond character is full of hope.

Naively, I presumed that the display cossies were done with the right fabric, velcro and a glue gun.   Felicity Abbott opened me to problems I had never thought of. There are daunting layers of licensing and intellectual property, made even worse because Sony is distributing world wide and its lawyers add their own rules.

Everything that is referred to and touched has to be cleared with the fashion house, and they don’t want to do it because they don’t have editorial control. Even worse, anything with a haute couture label like Elizabeth Arden or Hardy Ames actually has to be real. You can’t reproduce Chanel.

In a way that is an invigorating challenge. They scoured the world to find originals, borrowing and buying from auction houses and collections. There aren’t many of these iconic dresses left and they are valuable and fragile.  They had to find the right dress, in the right pattern from the right year – with the palette for the film. Sometimes they worked backwards, changing the dialogue to match the discovery.

‘I was amazed how compelling it was to find pieces of couture that were right for the period’, Abbott said. ‘The stuff that was vintage was fantastic.’ They plunged into period stocks of soft furnishings and textile collections for the clothes made in the costume department.

‘The problem for me in production design was getting the right light and reflection. Sheers are very important and drops, and the diffusion of the threads. The whole process is as much about palette and texture and sheen and how they behaved on camera.’

Abbott knew she was working with nostalgia, delicately balanced with melancholy and sharpness. ‘You can talk about nostalgia without romanticising a period of time.  It was a very important time for a lot of people. Period design is about poetics and the poetics of period is very different from a contemporary space.

‘We don’t just want a whole bunch of iconic signifiers. Most of what we live with is quite innocuous and comparatively undesigned.’ Good period, particularly in set dressing, is about what she calls asymmetry as characters live with accumulated possessions.

‘Most people don’t live in a showroom but in a continuity between mess and showroom. Balancing that is what naturalism is. The department store has its own naturalism.’ After all, it is a kind of theatre set.

The details in this film are a delight. They are far more than a backdrop for an emotional journey. ‘Bruce is a very visual filmmaker and literate in terms of design and very particular in terms of period detail. he has a kind of method approach which picks anything up which creates the right period and character detail. He is not faux in any way – he is creating a tone in everything he does.

‘We provide enough to allow Bruce to make adjustments. A lot of detail, some of which was on screen and some which wasn’t, but they are integral to Bruce in terms of style.’

The film as history

Ladies in Black was obviously a wonderful film to work on because it is so strongly cinematic and pulls every element into a common purpose. That question of history and nostalgia is vital because this is such a classic way of making a film, inspired by studio style on an indy budget.

After all, the milieu and customers on this film are infused with the one design ambition we did not mention in our discussion. The dreamland of the nation had moved beyond magazines and paper patterns. It came from the movies.

‘There is a place for this type of film’, said Felicity Abbott. There is very much an audience for it and its a very beautiful film. I hope everybody gets to see it. It is a great story about women and the relationships between women in their environment.’

Here is an interesting image. This was taken in September 1954 in the smaller David Jones in Perth. There is more of a sense of post war dowdy and this is a down-market display. But the crowd is wonderful.