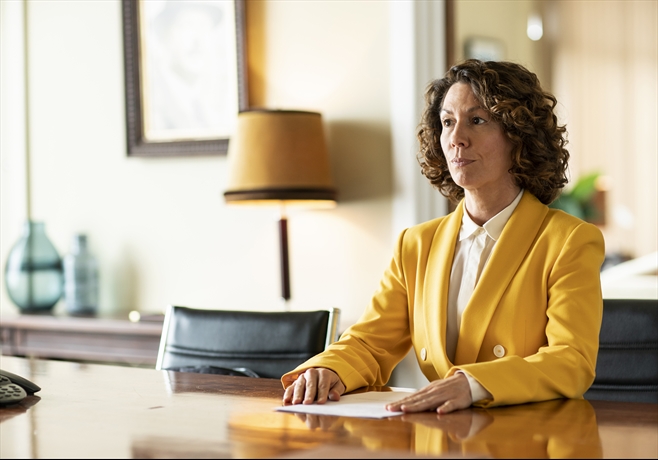 Fisk was one of only seven series chosen for the competition screening, which also included the Bloods (USA), Brigade Mobile (France), Frank of Ireland (Ireland & UK), Georges and Ferdinand Tribulations (France) and Starstruck (UK).

Produced by Porchlight Films (The Kettering Incident, Animal Kingdom), Fisk is written, co-directed and stars comedian Kitty Flanagan in the hilarious, quirky legal comedy about a high-end solicitor who falls from grace and finds herself in the low rent suburban world of wills and probate:

‘Bereaved relatives, long-standing family feuds and petty squabbles over money and inheritance make this job as much about being a therapist as a lawyer. Navigating her new ‘career’ proves tricky, as Fisk realises the truth of her misplaced assumption: just because her clients are dead, doesn’t mean she won’t have to deal with people.’

Our reviewer, comedy specialist Anthony Morris, absolutely loved this low-fi, laugh-packed Australian comedy, giving it four and a half stars out of five and saying: ‘With its firm emphasis on getting laughs, Fisk definitely feels like a step back in time. If you long for the days when sitcoms were just plain funny, then this is the series for you.’

Fisk has been an outstanding audience success for the ABC with figures that firmly placed it as the broadcaster’s top rating comedy for 2021. ABC Commercial hold all international distribution rights to the series which is available in neutral Spanish and French.

Of the win, Flanagan said, ‘I’m absolutely thrilled, especially when you look at the competition, we were certainly the scrappy underdog in the fight. It’s incredibly satisfying to learn that our Australian comedy proved to be relevant (and, more importantly, funny) to an international audience. Fist bumps all round to the entire cast and crew.’

Flanagan’s Fisk co-star Julia Zemiro (who plays officious office manager in the series), is a fluent French speaker and hilariously helped out with the acceptance speech.

Read: Five feelgood shows to watch during the latest lockdown

Producer Vincent Sheehan said: ‘Having attended Series Mania in the past I know first-hand how passionate and committed their audience are so to receive this award, and in the company of such strong competition, is rather special and great timing as we embark on developing Season 2.’

Last year, it was announced that Porchlight Films was turning off the lights after more than 20 years as an independent production company with Sheehan, Liz Watts and Anita Sheehan but Fisk has continued to be produced under the banner.

Series 1 of Fisk is available to watch on ABC iView.