Kate Jenkinson locks down in Wentworth

The actor playing the latest 'Top Dog' talks about her role in the iconic prison drama, on the eve of its eighth season.
Guy Davis 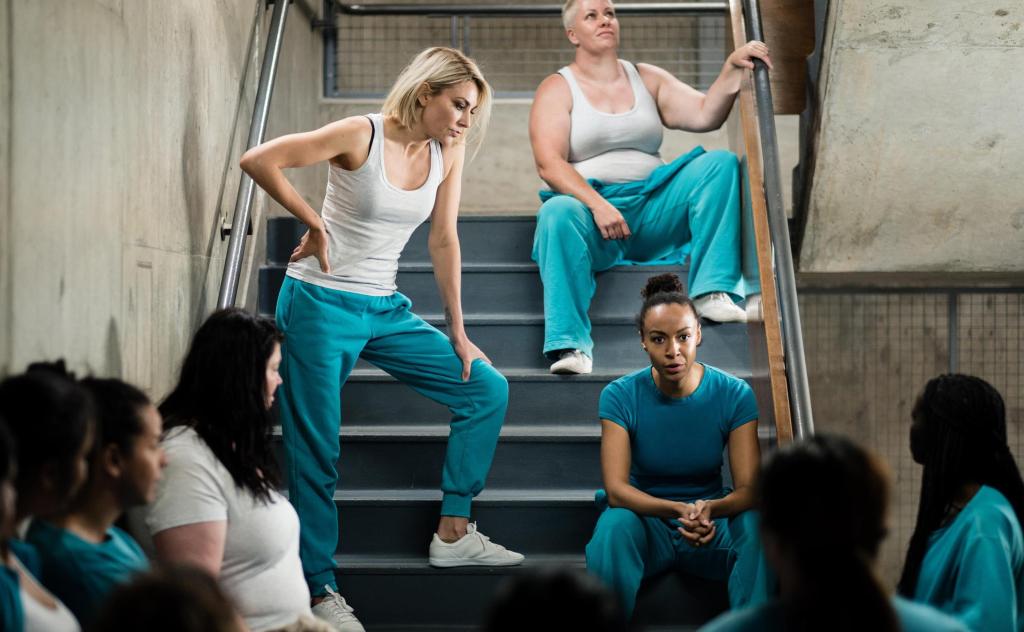 ‘I think I’m doing as well as can be expected.’

In these topsy-turvy times, Wentworth actor Kate Jenkinson is well aware of how fortunate she is. She’s healthy – having said that, she was scheduled to have a regular COVID-19 test after our interview – and she’s working, on the acclaimed and popular Foxtel prison drama that’s continuing to film in its self-contained Melbourne production hub.

‘Our first lockdown saw us stood down from filming,’ said Jenkinson, who has played Allie Novak on the series since 2016. ‘It was considered untenable to continue the first time around because we really didn’t know how it was going to spread, whether we could control it, what the parameters were, so Foxtel and [production company] Fremantle made the decision to cease filming until it was determined things could resume safely.’

While Melbourne is currently under its second round of lockdown conditions, the Wentworth shoot goes on as responsibly as possible, and Jenkinson said she feels ‘incredibly lucky that we can continue working, and filming in an environment where everyone respects each other’s safety and does everything possible to be sensible’.

‘The nature of filming Wentworth is pretty isolated anyway – we have one set, one location, we don’t have to interact with the public, we work with the same people every day,’ she said.

‘And we work such long hours that you’re essentially in an isolation bubble anyway – you wake up, you get in your car at 6am, you get to work and you’re there for 12 hours, you leave and get home at 7pm. It’s very isolated and regulated, so there’s kind of a safety in that.

‘Having a purpose and an outlet during this time, I feel it’s so important to my…well, I guess my sanity, so I’m grateful in that respect but at the same time incredibly worried about the state of the globe. It’s a very present existential crisis, and it has such huge implications for so many people.’

Continuing to bring the character of Allie to life has provided Jenkinson with focus, especially since the return of Wentworth for its eighth season sees the character assume the position of the jail’s “top dog” – the inmate calling the shots for her fellow prisoners. It’s a far cry from the homeless, abused and drug-addicted sex worker who first entered Wentworth four years ago.

‘Those two situations couldn’t be more polar-opposite,’ agreed Jenkinson. ‘It’s been a hell of an arc for Allie. Ironically, when she entered prison for the first time it was probably the most optimistic and hopeful and full of life she’d been. There was a safety in entering the prison – she had a history of homelessness and prostitution, and her life outside was so fragile that prison in many ways provided a security and structure she’d never had before.

‘In that first season at least, she was thriving – she had friends, she was falling in love. That was the most optimistic version of Allie. When you enter the world of Wentworth, though, it’s never an easy journey for anyone, and over the seasons we’ve known Allie she’s been systematically torn down and ripped apart – emotionally, psychologically, physically. As season eight begins, at first appearance she seems the strongest and most capable version of herself we’ve seen but a lot of that is a front for a broken person.’

And the return to Wentworth of volatile ex-inmate – and former top dog – Lou Kelly (played by Rake’s Kate Box) only serves to add fuel to the fire as Allie struggles to balance her hold on power with her desire to run the prison in what she sees as a fair and compassionate way.

‘I believe she’s a kind human being who doesn’t believe in violence. But the onus of being top dog is to remain top dog…’

‘Allie has been able to construct her own way of running the prison based on what she’s seen in the past – she has learnt from some of the best and some of the worst – and what she believes has worked and not worked,’ said Jenkinson.

‘I believe she’s a kind human being who doesn’t believe in violence. But the onus of being top dog is to remain top dog because Allie believes she’s the best person for the job, and if an agitant comes in, threatens her position, she may have to exercise a little power. As much as you want to hold onto your morality, that position has the potential to corrupt you.’

Allie’s Wentworth journey is a lot to take in, and a lot to express for an actor, and Jenkinson acknowledges the show’s team of writers for creating ‘a delicately woven tapestry’ where events of earlier seasons have a direct effect of what transpires now.

‘It’s clever and cohesive,’ she said. ‘Of course, you never know what’s going to happen to the character ahead of time; you have to let her past inform her future, and I do map out every single episode in terms of what happens to her literally and what happens to her emotionally. That’s part of the joy – the script is there as a guide but I get to choose how she reacts and handle what’s thrown at her.’

Jenkinson’s abundant enthusiasm for Wentworth is evident as she speaks, so it’s little wonder she was a die-hard fan of the show even before joining its cast. Her stint on the short-lived US sitcom Super Fun Night, opposite Rebel Wilson, had ended when she first heard about the role of Allie, and while she was despondent at the end of a ‘dream job’ her mood quickly brightened.

‘My agent said “So there’s a role on Wentworth…” and I was already packing my bags,’ she laughed. ‘I did want my next job to bring me back to Australia because I missed my home country but I also wanted a really great artistic reason to come back, and I got it. If there’s one show being created in Australia that I wanted to be part of, it was Wentworth. I think it’s one of the most exceptional shows being made anywhere.’

‘My agent said “So there’s a role on Wentworth…” and I was already packing my bags.’

Since graduating from the Western Australian Academy of Performing Arts in 2005, Jenkinson has been working seemingly non-stop in an industry undergoing a variety of seismic shifts. (Indeed, she simultaneously had roles in Wentworth, Doctor Doctor and Five Bedrooms in the last couple of years.)

‘The old paradigm is no longer relevant,’ she said. ‘Everything is abundant, everything is accessible and my industry is very much in the throes of innovation. The way I audition, the way I’m offered work – it doesn’t seem there’s that huge an ocean impeding anyone any more. I was in Melbourne when I was offered the job in Los Angeles; I was in L.A. when I was offered Wentworth. The already transient nature of this job has become even more so. That doesn’t spook me. It just shows that the industry is moving with the times.’

Read: Film review: Babyteeth is a complex portrait of youth

Regardless, the Australian entertainment industry remains a relatively small one. ‘That’s not a slight, it’s a fact,’ said Jenkinson. ‘We don’t have the depth and breadth of options because the size is smaller. But what Australia does within those parameters is exceptional. Our content is extraordinary given our size.’

Since graduating, Jenkinson’s own credit list seems to take in the entire history of Australian series television, with everything from serious drama (The Straits, Killing Time, Tangle, The Time of Our Lives) to comedy (The Wedge, Offspring,The Ex-PM, Lowdown) and everything in between (Satisfaction, Rush, and many more).

And while she has demonstrated she can move nimbly between genres and tones, and admits that flexibility and versatility are key components to a working actor’s success in Australia, she also feels that ‘there’s potentially too much emphasis on being a well-rounded actor who can do anything, play any role’.

‘Range is of course a bonus, but what I’ve noticed is that you get cast really specifically based on you – no matter how much range I can display, there are certain roles I’m never going to get,’ she said. ‘I’m just not the right fit. The advice I wish I’d received, and what I tell young actors when I teach, is that you have to embrace who you are and what you have to bring, and that’s enough. If you’re good, there’ll be a place for you.’