Actor James Franco is debuting his art exhibit ‘Gay Town’ in Berlin.
ArtsHub
[This is archived content and may not display in the originally intended format.] 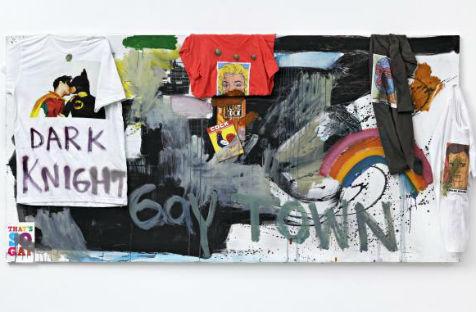 You may know him as Spider-man’s best friend or the guy who had to saw off his own arm in 127 Hours, but Hollywood actor James Franco is tackling another artistic form altogether in his new exhibition ‘Gay Town.’

Featuring a combination of painting, video, drawing, film, sculpture and photography, Franco’s art exhibit explores the themes central to its creator’s artistic practice, touching on a variety of topics including public and private persona, stereotypes and society’s obsession with celebrities.

In one of his multimedia collages, Franco has plastered a pair of fake breasts next to a t-shirt featuring a risqué photograph of Snow White with the words ‘K-Stew’ spray painted over it. As anyone who reads the tabloids would know, this is a reference to Twilight actress Kristen Stewart who was scrutinized closely by the media after it was revealed that she had an affair with her Snow White and the Huntsman director Rupert Sanders.

Franco’s career truly took off when he appeared as Peter Parker’s best friend in Sam Raimi’s Spider-Man trilogy, so it’s no surprise that this exhibit also contains a reference to the famous spider-crawling superhero. On a photograph of Spider-Man, Franco has spray painted the words ‘F**k Spidey’, perhaps another way of showing his disapproval of the recent Spider-Man reboot The Amazing Spider-Man which Franco famously reviewed as ‘meh.’

Another two superheroes have also managed to include themselves in Franco’s exhibition, although this time he didn’t star in the franchise. This particular work features Batman and his famous side-kick in a passionate embrace, with the words ‘Dark Knight’ spray painted under the image.

According to the exhibit’s press release, most of the art works exhibited in ‘Gay Town’ were created in hotel rooms, makeshift studios and other temporary locations while Franco worked on his film roles.

‘Franco makes reference to several of his motion picture work and related projects in parts of the installations and other works on view in “Gay Town”,’ the release states.

Franco got his first professional acting gig in 1997 when he appeared as a guest star on several television shows. In 1999, he starred in the television series Freaks and Geeks, which went on to become a cult hit despite its very short run of 18 episodes. He received his first Golden Globe nomination for portraying James Dean in a 2001 biographical TV film about the Rebel Without a Cause actor. His first Academy Award nomination came along in 2011 when he portrayed mountain climber Aron Ralston who was forced to cut off his own arm after it was trapped under a boulder while he was canyoning alone. The actor’s next big roles include playing the role of the Wizard in a Disney prequel to The Wizard of Oz, titled Oz: The Great and Powerful.

‘Gay Town’ is currently being exhibited at a temporary project space on Karl-Marx-Allee in Berlin until 9 March.