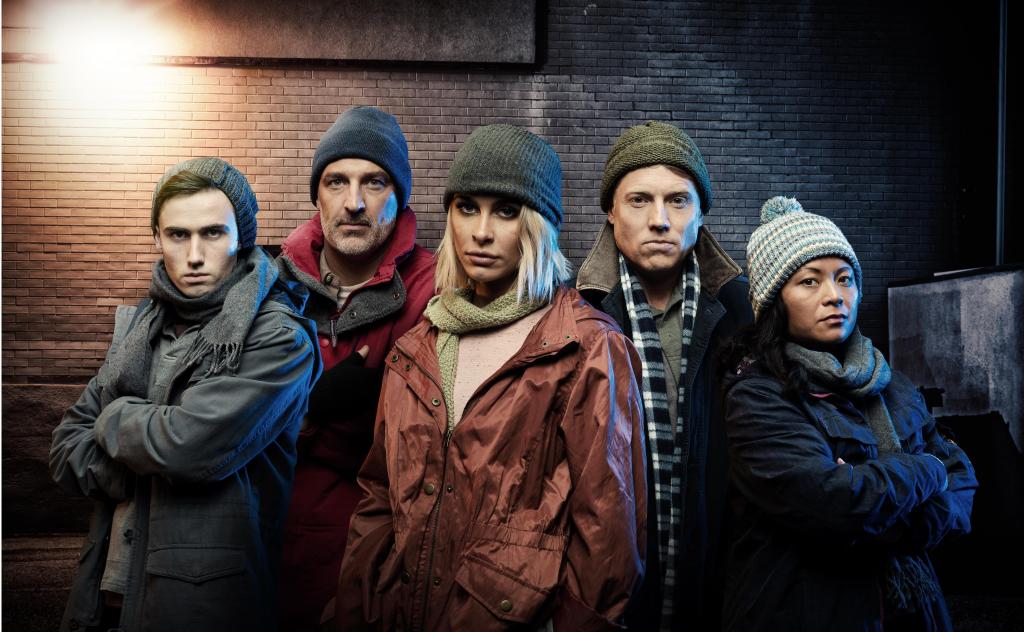 The cast of Filthy Rich and Homeless, season 3, courtesy SBS.

Jacob Hickey’s name has been popping up on prestigious Australian documentaries since 2010 when he won the AFI Award for best documentary direction for Inside the Firestorm, a searing ABC feature-length doc about Black Saturday’s bushfires.

Since then, Hickey has written and produced many award-winning series, including Once Upon a Time in Cabramatta (2012) which attracted one of the biggest audiences ever for an SBS documentary and won Gold and Silver Medals at the New York Film Festival’s International Film and TV Awards; and First Contact which won the TV Week Logie for Most Outstanding Factual Program in 2015.

Hickey arrived in Melbourne from the UK in 2008, after starting his career at the BBC, working his way up from ‘basically making tea and looking up phone books’ to working in current affairs, documentaries and historical series. Speaking to Screenhub on the phone he says he loves research, and that thorough research is the bedrock of every successful factual project. In his terms, a successful factual project is one with social purpose as well as audience reach, which brings us to Filthy Rich & Homeless, his latest baby.

‘What I’m really proud of is that our show actually focuses on the issue of homelessness,’ Hickey says. As head of factual at Blackfella Films (where he’s worked alongside Darren Dale and founder Rachel Perkins since 2013), Hickey is series producer and writer of all three seasons of the SBS observational documentary/reality TV show. Dale is the producer of the show, which was made for SBS with assistance from Screen NSW.

Filthy Rich & Homeless first premiered in 2017 to extraordinary ratings, with a second series in 2018. The next season premieres over three consecutive nights on June 9, 10 and 11. Filmed before the pandemic, and as per the established formula, we follow five high profile Australians as they ‘swap their privileged lifestyles for 10 days of being homeless in NSW’. The five participants this time are: Deputy Lord Mayor of Melbourne Arron Wood; restauranteur and entrepreneur Pauline Nguyen; comedian and radio presenter Ciaran Lyons; emergency doctor and businessman Dr. Andrew Rochford; and, as there must always be some glamour element in these shows, actress, model and ‘social media phenomenon’ Ellie Gonsalves.

‘From a shop window point of view, we bring in the audience via the five very brave, good people who put up their hands to take part,’ says Hickey. ‘But this is just a vehicle to actually tell the stories of people experiencing homelessness. It’s about going behind the stereotypes and stigma of homelessness rather than how so-and-so copes without their silk sheets.’

Image: Jacob Hickey, writer and producer and head of Factual at Blackfella Films.

Based on a format created by Love Productions, broadcast by the BBC in the UK, and apparently inspired by an earlier US show that focused on the emotional journeys of participants giving up luxuries and privileges, Hickey says the Australian incarnation has clear social purpose. That’s what makes it interesting and worthwhile to him and to Blackfella, who are ‘always driven by purpose-led program making’.

There’s a fine line between tacky and tasteful when it comes to reality TV. SBS seems to walk that tightrope with skill. The multicultural broadcaster has produced, promoted and broadcast a raft of these award-winning and high-rating factual series that have, at their core, an intention to increase tolerance and deepen understanding of social issues. Issues range from the refugee crisis (Go Back to Where You Came From), to prejudice against Indigenous Australians (First Contact), mental illness (How Mad are You? also produced and written by Hickey) and Australia’s growing homelessness crisis which, according to the last Census, affects 116,000 people.

As Marshall Heald, SBS Director of TV and Online Content has said in the presser:  ‘Filthy Rich & Homeless goes to the core of SBS’s role in exploring complex issues, confronting tough questions about society and exploring issues central to our Charter. The first two seasons … sparked a national conversation about one of the most important social issues we face as a nation, provoking debate and discussion and inspiring attitudinal and real change amongst the Australian public. The third season … will further explore the people and communities who are experiencing homelessness in central and regional NSW, and contribute to a better understanding of the many issues they face.’

Read More: From Black B*tch to Total Control: An interview with Darren Dale

Having made a number of these kinds of shows (including First Contact) Hickey says that choosing the right talent to front the show is at the heart of creating meaningful rather than exploitative content. ‘When you’re casting, you look for the depth of the people, and the level of insight they can bring. You can never know for sure, but you hope that they’re going to be able to immerse themselves in the situation and be insightful and intelligent about it, to articulate that perspective for the audience.’

‘With both those shows, when you’re creating them, you look at the stereotypes and stigma that exists, and then you create journeys for the participants that will allow them to tackle that, to connect with the issue and understand it better. As opposed to thinking, “Oh, this person will find that situation horrific and hopefully they’ll cry at that point!” Which is just pointless and wrong, from an ethical point of view, an editorial point of view and a duty of care point of view. You have to keep asking yourself, “why are we doing this? What is it for?” and bring it back to the purpose of why you’re doing it all.’

How real is it?

Which brings us to the question of exactly how authentic the experience of homelessness can be when you’re being followed around by a film crew?

Ten very experienced shooter-directors are credited, and many of their names will be familiar. Dave May leads a team that includes: Olivia Rousset, Maddie Parry, Tim Mills, Kathryn Millis, Claire Leeman, Ben King, Mark Hooper, Rob Gunn and Tim Green. Hickey says the briefing given to all shooter directors across the three seasons has been strict, ‘and they all admit it’s a briefing they haven’t ever had before.’

‘Normally in documentary making and factual television, it’s all about relationship building. We build trust with subjects who then feel comfortable to tell us things. This is the polar opposite of that.’

‘Normally in documentary making and factual television, it’s all about relationship building. We build trust with subjects who then feel comfortable to tell us things. This is the polar opposite of that. I do warn the five people [participants] prior that the people filming them are not their support networks or their friends. They’re not there for company. They’re there to observe them on those streets, particularly in the first couple of days.’

Having said that, as part of the show’s risk assessment, health and safety briefing and code of conduct, there are protection officers in line of sight 24 hours a day, and the safety of participants is paramount. ‘But that’s very different to having a director or producer around to make you feel good and tell you it’s all fine,’ he says. ‘We don’t do that, and we don’t talk to them at all unless we have a very specific question.’

‘It’s very important to acknowledge that they are only having a snapshot here, not a real experience of homelessness. They all get to go home, but if you watch the show, within 36 to 48 hours, the kinds of things they’re talking about reveal the success of the production in terms of exposing them to the issues. It all goes back to deep research from the homelessness sector, who we work with closely. They always say it’s not about being cold and hungry because in Australia, there are many food services for instance. Here, the real challenges of being on the street or in temporary accommodation are about dislocation and mental suffering and isolation. And if you look at the participants, they start out being worried about the weather or being hungry, and very quickly move to talking about loneliness, the sense of being judged and persecuted.’

Hickey says they had to think very carefully about whether or not to make a third season. ‘The second season surprised us with how well it did, the feedback and the audience numbers. SBS were very keen to do another one, but we didn’t just say yes, because we weren’t sure what else there was to say. So we approached the homeless sector and said we wouldn’t do it without their support and approval, and asking them how we could make it different.’

‘There were also individual stories that we wanted to do that we hadn’t captured in previous seasons, for instance, people living in cars, or the big issue of female homelessness, particularly older women, and domestic violence.’

Hickey says that on a meta level, this series tries to spend more time creating journeys that suggest solutions to a problem that is actually simpler than we like to think. ‘We want people at home to see that this is actually a solvable issue and we could do something about it.’

As Hickey notes, the emergency housing that’s been provided to homeless people during the pandemic lockdown has suggested how easy it is to solve when there’s a strong political will to do so.

The factual brief at Blackfella

Hickey says he first met Darren Dale at the AACTA Awards in Sydney, where they were both up for a slew of awards yet walked away empty-handed. Not that this was a real sore point (‘I’m used to clapping and looking delighted for other people a lot in my role!’), but they bonded through missing out. He was brought on board in 2013 and when he asked Dale about the brief around factual at Blackfella, the answer was short: ‘Well it has to be good.’

‘All the time we are looking at different ways of understanding Australia, who we are, what we are, where we come from and where we’re going. If you think about each production, it has to be trying to achieve that in different ways.’

Hickey works from a Melbourne office, while Dale is in Sydney, and this seems to work well.

From the looks of the Blackfella slate, Indigenous subjects are certainly represented, but just part of a very broad collection. ‘We do look at Indigenous affairs and subjects, but we’ve also looked at homelessness and mental health, with How Mad are You? and DNA Nation, which was about identity.’

‘I suppose all the time we are looking at different ways of understanding Australia, who we are, what we are, where we come from and where we’re going. If you think about each production, it has to be trying to achieve that in different ways, to understand ourselves better. Without sound pious, it has to have a purpose. I feel incredibly lucky to be doing it. It’s a genuine love, and every day I feel fortunate to be making this kind of television.’