Combine the strange rules of screen production research with a pandemic and the resulting space-time ruckus is a true headache. We suffer so you don't have to.
David Tiley 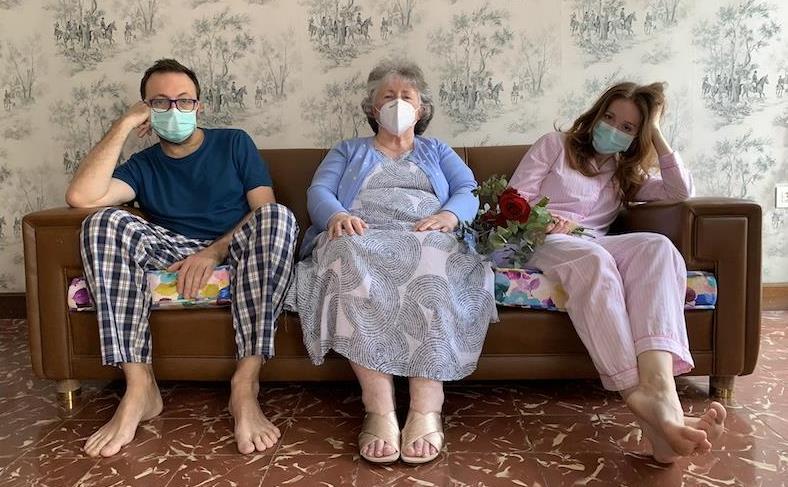 Cancelled, the Facebook real life account of Australian director Luke Eve and performer Maria Albiñana locked down in Spain provides the perfect image for 2020 in the sector. Image:  Screen Australia.

Graeme Mason does not mince words in public. So his general response to the COVID-19 pandemic means something. ‘I cannot believe the ability of the sector to work together for everybody’s best interest, and the ability to adapt and to just be resilient. It’s just extraordinary,’ he said in an interview.

‘We and AFTRS and the Federal government helped co-ordinate a task force, and got all the agencies and the guilds and big production companies and networks all working together, to ensure that people are safe, come up with guidelines and get people back to work. And I think that was very impressive, watching people collaborate and share.’

The occasion was the launch of the annual Screen Australia drama report, a trove of meticulous statistics and productions which define the ecosystem of the sector. The 2020 report, in the plague year, is a snapshot of history whose story is half done.

Before we explore the impact of COVID-19 directly, here is a chart from the report that speaks volumes about consistency in changing times. This is the total television drama spend over the last five years, from 2015-16 to 2019-20. The second to last line is the most recent figures battered by the virus, while the final line is the five year average. 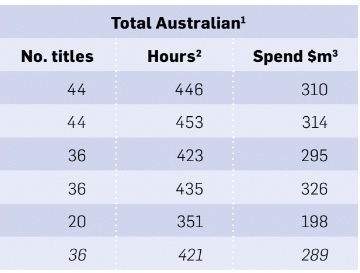 Embedded in this list is the $100m or so the broadcasters spend on series/serials, which is basically Neighbours and Home and Away.

Telemovies went out of fashion two years ago, and never cost more than $2m anyway. The chart below compares the cost of TV miniseries on the left with online drama, run by the streaming companies on the right.

So much of the year is contained in one diagram which covers all the production spend that flows through Australian bank accounts. It shows the impact of the pandemic, although the belting we have copped is within the normal variations from year to year.

Again, this shows us the last five years of production. As always, the differences are constructed by the fact that the sector runs in fits and starts, and also all expenditure is credited to the first day of principal photography, which is the international convention for these statistics. The disadvantage is that they do not tell us much about the actual experience of work flow, which is the lived experience of the sector. On paper, it looks pretty good.

There is a common narrative in the sector where producers and company owners were running full tilt to prosperity exactly a year ago and were left empty handed and paralysed by the end of April.

Right now they tell us that nearly $1 billion worth of shows started production between July 1 2019 and March 2020. That tells us that the underlying business scale of the whole sector is probably consistent with last year.

There are some intriguing comparisons. Australian online drama, which is a strange term for streaming, is substantially higher than any year in the past. So is foreign TV and online drama.

The income available to the sector’s workers is way under this. The report says that six TV dramas had their shoots interrupted. Nine TV titles, worth over $55m, were postponed and are not included here. Screen Australia estimates that ‘around 26 Australian drama titles with total budgets exceeding $325m were postponed.’

The best way to understand this is to estimate how much would have been expended without the virus. According to Mason, ‘We were heading for records in quite a few fields. We had  the 26 titles postponed. Add the $325m in their budgets, and we are looking at a total of $1.3 billion.’ That is not a record, but it is only $80m less than the high point for two years ago.

There is a common narrative in the sector where producers and company owners were running full tilt to prosperity exactly a year ago and were left empty handed and paralysed by the end of April.

Seventeen domestic features went into production for $199m, compared to a five year average of 36 for $222m; there were two co-pros for $6m against an average of three for $33m. Eight of the local features were shut down over COVID-19, and nine features were postponed, so they don’t occur in the figures. Screen Australia puts the total budgets of this hit at $250m while resurrected pictures could cost up to 15% more.

Here is the last five years of feature spend.

Again it shows us how the numbers wobble, a large amount of which is due to the actual date of the first day of shooting, mixed with the larger budget range of foreign productions, the role of the incentives and the changing dollar over a longer period..

The $1-5m space is pretty constant. The $5-10m area went up abruptly two years ago and stayed that way last year, while the $10m+ category is stable around 21% when we add co-productions. The industry would be much healthier with many more co-pros over $10m compared to the maximum of four we manage at the moment. In a way, the sector is trapped in that sub $10m space.

Despite COVID-19, the numbers still show us the relative muscle of the various television/streaming providers.

This shows us how much the commissioning from each sector affects the total industry small screen spend; the impact of changing policies and regulation in the commercial free to air sector dwarfs everything else. However, the total number of commercial hours reminds us that  $100m goes on low budget serials which are probably safe, so the contested amount is really around $111m, which is around 2/3 of the ABC’s contribution.

Remember too that the broadcasters etc are not actually putting that money in. Instead they trigger the rest of the budget. In 2018-19, which is the last normal year:

The government dropped in an average of 13% via the tax rebate, along with state agency money, global arrangements and private investment which is miniscule in this area.

This is a wobbly category because the production companies tend to be centred in Sydney but expenditure is all over the joint. The states campaign to get legitimate local expenditure in return for their support which includes building the producer infrastructure locally as creative branch offices of Sydney and Melbourne. This is what Screen Australia has to say:

There is a lot in this document, including lists of productions which are informative in a different way. Right now, the sector is about to move from a unique year of plague to an uncharted year of opportunity colliding with political frustration. The delayed productions are restarted, with higher budgets and probably shorter timelines, while overseas producers are desperate to find safe haven for their productions. The loss of 10% in the offset for features and the gain of 10% for drama shifting opportunities and creating budget crises while the reboot of the tax regime on July 1 2021 is going to be interesting, to say the least.

As Mason pointed out, ‘We have gone from what looked like a boom year to tumbleweeds, and now we are back and there is a premium on crews and facilities.’ The temporary guarantee is still rolling along at capacity and will continue until this is over.

In the sliding jumble of delayed work, new work and refugee productions, the figures for the last financial year and this one will mean little by themselves. In the 2020-21 year, which is right now, the first four or so months had nothing starting, which will create a dip in itself. That was an important collapse in cash flow for screen people, who will work in a frenzy now to make up the difference.

In television, there is now an incentive not to start in this financial year because the rebate is up by 10%, starting on July 1 2021. That all shaves away at the current year’s figures so the total is also pretty unstable.

But, we will learn a lot by bundling the two together. Only then will we know how much difference the collapse and sudden stimulus will make. There are more subtle factors too, as producers, exhibitors and agencies loosen up to work in new ways, and Mason’s new world of co-operation may (or may not) take hold.

The industry, for instance, is much further ahead than many of its enablers on the integration of education and production. The streamers are stronger, and the festival system has learnt some new tricks.