How do the COVID-19 support programs from state screen agencies compare?

The virus-inspired Pivot melts into all the other Pivots deployed by state agencies to reflect the mega-Pivots around broadband. So change is piling on change.
David Tiley 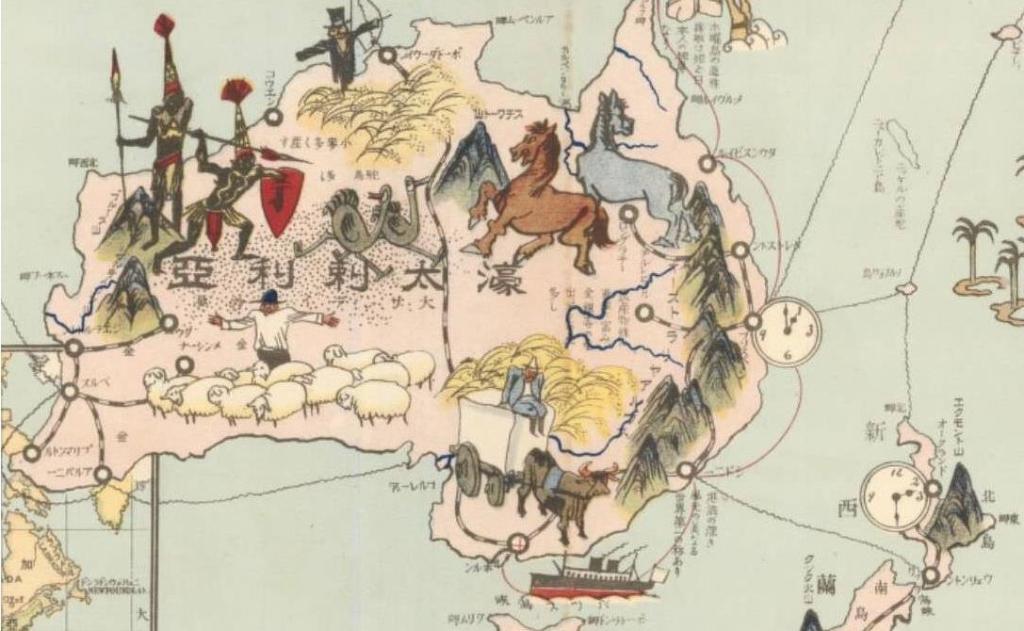 With apologies to Tasmania, this is a 1924 Japanese map of Australia. It’s all a matter of cultural perspective.

Here’s a state by state rundown of the schemes on offer to the screen sector right now. Everyone is working through the contracts and funded proposals to renegotiate sensible terms and milestones while producers continue to receive conventional development and production funds.

Most positive is the RIDE feature film fund ‘for under-represented Queensland talent to develop and produce a $1.5 million feature film, every year for three years.’ RIDE stands for Respect, Inclusion, Diversity, Equality, and the deal links Screen Queensland with Media Super, the Post Lounge, SBS and Madman Entertainment, all with great perspectives and a guarantee of exhibition. It is a rolling program with no deadlines.

Digital Conversions is a modest scheme which will provide three investments of $5,000 each month until October to help create a proof of concept for a longer idea. Applicants must have a solid path to putting it online, which is not hard. With that amount of seed money, producers will learn the art of stitching together deals, some in kind.

The Agency has committed $3 million for a variety of plans, with development close to the centre. The Ideas Program is being bulked up, while Digital Consultations is a smart idea.

The most substantial of these is the SQ Enterprise program: ‘We are providing $1 million to support Queensland-based screen businesses to deliver a 12-month strategy for growth and sustainability’, due on May 29.

The state government has introduced a slew of general business support measures which apply to the screen and general creative sectors. The specific industry responses can be found tucked into the Create NSW provisions which emphasis the continuity between small to medium enterprises across both arts and screen.

The Small Budget Projects program has pivoted towards the virus by emphasising work and delivery online or in the home. It refers specifically to ‘support professional artists to respond to the impacts of the 2019 bushfire season and COVID-19 crises, for local communities, in supportive and creative ways.’ Two big hits, not one.

‘Slate Development can be applied for a maximum of $100,000 for a slate of three or more projects for TV Drama, Factual, Features and Online.’

It is impossible to imagine a screen creation company which has not been affected by COVID-19 unless it has been hibernating to recover from some tremendous success in the recent past. Or just moribund.

The funds have some neat grace notes. A Health and Wellbeing Initiative, to support ‘the creation, development and presentation of creative practice and programming online, and other forms of broadcast, to support mental health and wellbeing outcomes’ is already underway.

There is a substantial general webinar series for creative workers, and two for the screen sector.

The Victorian agency has an overview of its response backed up by details current up until May 20, which is today. It has published an explicit list of its pivoted support services, which include developing safe work practices with all the other stakeholders while the locations and production services team has been scouting alternative locations and doing the permit dance with councils and the agency runs a help hotline from a variety of homes.

Film Victoria has surveyed the PDV sector about the disciplines of working from home. It is also ‘intelligence gathering across domestic and international film production territories to inform Victoria’s film production strategy both during and post pandemic.’

Like everyone else it has become more flexible about contracts and deadlines and gone granular with specific changes.

That market attachment change is important in the light of the Supporting Australian Stories on our Screens options paper, to which Film Victoria is responding. It goes wider than that as the sector tries to secure global presales.

The Victorian government sees the screen sector as part of the creative community which is being supported by The Sustaining Creative Workers initiative for independent practitioners. The $2.2 million in the pot is not huge, given the scale of general industry support, but it is pretty specifically targeted. It delivers ‘quick-response funding to professional independent creative practitioners, sole traders, freelancers, collectives and micro-organisations/businesses whose work and livelihoods have been negatively impacted by coronavirus.

‘It will support creatives, across all creative disciplines, to continue to work in their creative field, adapt to change, research and develop projects, develop their product or skills, and/or connect with new audiences or markets.’

The SAFC has a couple of small programs. It is about to run Monica Davidson’s Survive and Thrive workshop this Friday, while it has bonded with the Mercury Theatre to provide a paid Master/Apprentice program to link experienced and emerging crew. The hunt is on for the mentors who need to register interest by Friday 22 May or nothing will happen.

Again it is trawling for interested parties to be involved in a Virtual Open Day ‘where experienced Heads of Departments (HODs) will present to new players seeking to enter the industry’.

Unfortunately the SAFC has no extra money, that substance being exceedingly rare in the SA economy at the moment. So money has been redirected internally to support two new development programs to replace the current Early and Advanced Development Grants. The emphasis is now on projects closer to production with ‘the Targeted Development Grant, for projects at early and mid-stage development, and the Matched Market Development Grant, providing guaranteed matched funding to South Australian projects with secured third-party development support’.

Screenwest has done well out of the West Coast Visions project, which invests $750,000 with new talent on a feature, for almost a decade. The organisation is continuing to offer this opportunity even though the virus brought the roof down, but with some modifications.

It how has a two-stage model:

That is both a way of developing a production and spreading the experience around.

By digging around its current allocations and finding tranches unwanted because of COVID, Screenwest has created the WA Screen Industry Sustainability Package. It is worth $2.5 million. Based on tracking Facebook posts and the COVID-19 Impact survey, it came up with The Bright Ideas Sustainability Fund, ‘a one-time special purpose practitioner initiative aimed at creating new methods of sustainability for the Western Australian production industry. Designed primarily for Below-The-Line Crew and Directors, it is designed as an instigation for outside-the-box ideas that can be offered to the industry in the current environment and into the future.’

‘Bright ideas may include proposals for Personal career development; Workshops (online/virtual in the current environment); Specific crew-based advocacy programs;  and Proposals for future proofing production processes. We are also open to proposals that sit outside the above categories.’

The allocation tops out at $5000/application. The existing development programs, which are pretty elaborate, have been boosted with extra cash. Ditto the On Demand Content Fund.

These programs were put up quickly and have passed their deadlines.

Considering the relative size of the state and its financial problems, the government is doing well in supporting the screen sector under COVID. At risk is the momentum developed over the last few years of production, and the future possibilities of a global market increasingly tuned to local visions.

An Additional Screen Development Fund will provide an extra $250,000. ‘To allow more people to be involved in development tasks, funding caps for the Screen Tasmania Project Development Program have been increased to $30 000 for Advanced Stage Development and Short-form Series Booster, and $20,000 for Intermediate Stage Development,’ according to the announcement. The program closed on 13 April.

There is also an Art and Screen Digital Production Fun offering ‘grants of up to $10,000 for individuals and $50,000 for organisations is available to enable the arts and screen sectors to work together… This funding will help artists and arts organisations to work with Tasmanian screen professionals to make content in Tasmania for digital distribution and promotion.’

The support package for Screen Canberra was announced as this article was sent out. The new package contains:

‘MADE IN CBR is a $250,000 Special Purpose Fund established in 2020 under the CBR Screen Fund and
supports the development of screen projects that have the potential to connect with market and reach
audiences, as well as supporting the development of ACT Screen professionals.

‘Accelerator TV POD is an intensive gateway program for Australian and New Zealand writers, directors
and producers seeking to develop and market-test TV projects with strong commercial prospects. The
program has been reworked to be delivered online over a 6 month period. The project-centred program
assists participants of diverse backgrounds in generating, developing and pitching a screen project.’

The SAFC has a neat chart of support from its perspective which also adds the general business support available to production companies.

You can find a Googledocs spreadsheet, intended for victims of abuse, which also maps community support in response to COVID-19 on a state by state basis.

Don’t forget the myriad of interviews and discussions around on the net. They turn up on agency, guild and educational Facebooks.