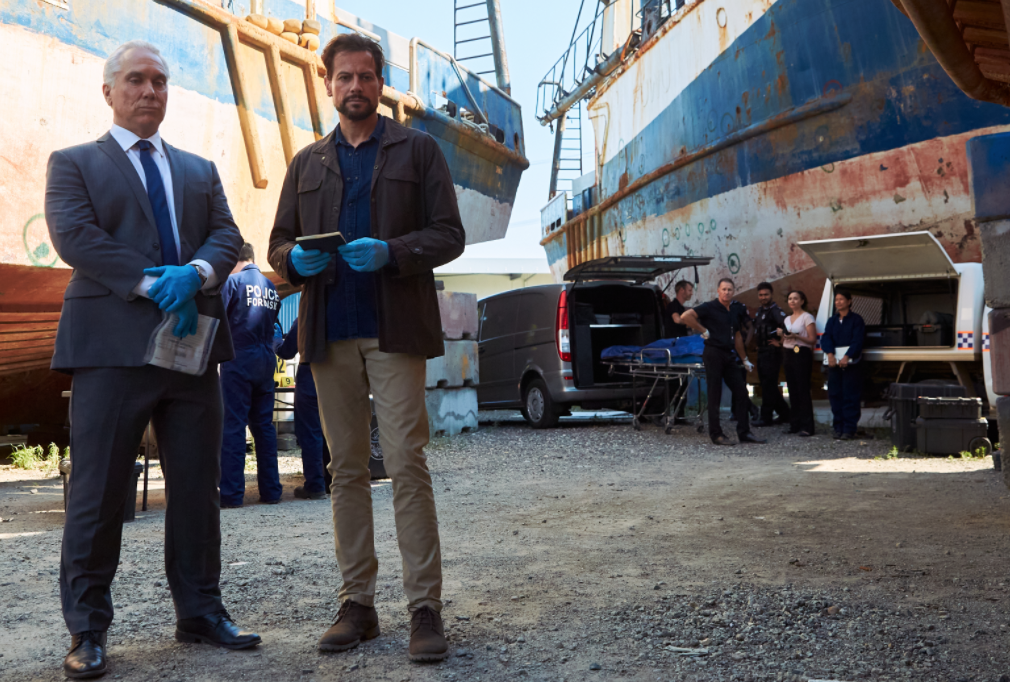 Harrow is now in its third season

The Australian public first encountered Hoodlum Entertainment – the Hoodies to their many admirers – in 2003 when subscription provider Austar and the ABC combined to launch Fat Cow Motel. It was promoted as the world’s first  interactive entertainment broadcast on free-to-air television.

It is fair to say that Hoodlum created the first Australian production company driven by a digital imagination integrated with linear communication forms. They have made no less than 15 digital projects which give the company a global footprint. As it says on the website:

They have a prime time Emmy, an International Emmy and two BAFTA Awards. Their long form series drama Harrow is in season three, Five Bedrooms 2 has arrived, Tidelands established them on Netflix, and Secrets and Lies has a US edition.

All in less than twenty years.

‘Over the years,’ said Mayfield, ‘I’ve realised how lucky we are as a partnership. We came together as friends and good people with a shared ambition to tell good stories and be good bosses and build a business. Really from the outset, that is how we came together.’

According to Robertson, ‘We were totally naive people who came together to make a short film. We had to go for funding, I produced it and Nathan directed it.’

Read: Ones to Watch, and get to know, and support

Mayfield has a Bachelor of Business in Film and Television from Queensland University of Technology, where Robertson also did her Bachelor of Arts in Visual Arts and specialised in sculpture.

‘I did al visual arts degree and I had no idea about business and the numbers. I just had to learn how to be good with numbers – prior to that I was, but I didn’t study it at university – I had to be someone that makes this work,’ Robertson said.

They had a lot of valuable advice, but their mentors sold products and they realised that Hoodlum was about selling ideas which is a very different proposition.

Said Mayfield, ‘It was an experiment. It really was about saying, “Okay, we’re a small business, we have taxes to pay and rent. And what are the ways to do that?”

‘Like anybody outside Sydney or Melbourne, we were under the radar. We weren’t getting the attention, so we had to treat Brisbane as a suburb of Sydney, and stay current.’

Robertson said, ‘Always from the beginning, we just wanted to set up a company, rather than be individuals. I remember saying to a friend, “I just want to set up a company that we can all like rather than be individuals. We wanted to be a brand that wasn’t about us, that was bigger than us. That was a goal, that was our dream.’

The company started in 1998 and only really had credits in 2003, but that first flourish was innovative, substantial and involved two commissioning organisations. Most producers would say they moved pretty fast. Meanwhile, they were on the dole.

Robertson sees their fiscal instincts as a key reason for their survival. ’We’re both very cautious people, and I’m happy to say that in the 25 years we have been working, apart from taking out loans guaranteed against projects, we’ve always been very conservative in any of our financial dealings.’

They didn’t borrow against the company, they kept their wages low, and they made sure they could keep their employees for at least six months. ‘I know how hard it is to get things happening and we still had to pay bills, so it was very much, “Oh gosh, we just got a new project so we can pay ourselves $240/week now.”

‘We’ve had a couple of periods where we’ve had to reduce people’s days to two days a week because it was really tough, but we’ve never been through a period where we haven’t been able to actually stay afloat.’

They understood the building blocks which many smart companies articulate – this is a relationships business, don’t overpromise, understand your key point of difference, study the market and make sure your pitch is really right for the slot.

Said Mayfield, ‘The intel is the cheapest thing you can do as a small business, and as a production company, you need to start strategising and looking into how things work. How do you research your research?’

With the benefit of hindsight, that first bid with Fat Cow Motel was an endearing stagger into the unknown.

As Mayfield remembered, ‘Fat Cow Motel was a thirteen by half hour series on the ABC, but it was also interactive and that was the point of difference. We didn’t really know what we were talking about and we sold it as a TV show which was also online. It got us a lot of attention and it’s still one of our favourite experiences.’

Austar was a junior player in the subscription market, while all eyes were focused on Foxtel. But the Hoodies noticed that both companies had an expenditure quota to fulfil. Austar needed a project to satisfy the obligation and Fat Cow Motel was crafted to fit the bill. While they want to make crisp pitches, they also use soft discussions to sound their clients out. They are building relationships which probably last for five years across a project.

Their very first agent at US titan ICM told them that most executives are basically trying not to get fired. Robertson learnt the lesson well. ‘Everyone’s just trying to keep their job, they just want to get a win. And so when you pitch something it has to have something that they have to sell it into their boss, and they have to sell it in a way that it’s going to make them look good.’

Mayfield added, ‘The secret weapon of when you are Australian producers selling stuff overseas is – honestly – we have nothing to lose. You can go into a meeting and pitch your heart out and know that you are confident. Tracey said all the time in the early days, “You can’t be desperate and you can’t be cocky.”’

So they can be calm and confident, but also flexible. They can analyse their performance and work out how they succeeded, how they failed and whether the deal was possible.

They are very good at the Zen of seeing a new opportunity. Screen Queensland supported them to go to overseas markets so they learnt how their offering was unique.

This is how they became part of Emmerdale, one of the crown jewels in the UK ITV slate. Soapies are precious.

There was a point where we went, “Why don’t we sell Fat Cow and put it on broadband?”’, said Robertson. ‘Nobody understood it because we were too far ahead, so it was really hard. We’d been talking to ITV, and they said, “Oh, so you kind of did this with your show. Do you think you could do this with Emmerdale?” We’d worked on soaps in Australia and we said, “Of course we can.”’ There’s that touch of caution again.

‘At that time there were the TV people and then there were the internet people. They didn’t really speak the same language and they didn’t speak to each other. We came in and we knew TV and we knew how to speak online. The interactive people at ITV said, “Do you think you could maybe talk to the producers on the show?”

‘They immediately went, “Oh my God, no, no, no, not another interactive person that’s going to tell me what to do.” But they did find their champion who asked the Hoodies if they could fit into a show and a process which was doing very well.

Robertson and Mayfield were different from any other digital company because they already understood the television process, and storytelling. So they were welcomed. The deal involved shooting extra material with the cast to create small stories and events which engaged with the main narrative. It is a tricky jigsaw.

Here is the site to play the game.

According to Hoodlum, the Emmerdale Channel is fully integrated with the TV show. At the end of each episode, the show will encourage viewers to visit the channel where, every night, new content will be uploaded. The channel will attempt to involve them in the whodunnit’s various storylines through gameplay and a competition to gather points: among other things, they will be able to listen to online “voicemails,” receive whodunnit-related emails, access secret broadband video content, play games and follow clue trails. They will also be able to become virtual “Emmerdalians,” moving to town and setting up their own cottage, Hoodlum says.

ITV sent them off to prepare a bible so the usual crew could shoot it. As Robertson remembered, ‘They got it and they said, “We have no idea how to even begin this. Do you think you could do it?”’

‘Of course we didn’t actually know but we knew how the TV show worked, and we knew what, in theory, we’re going to do.’ So they flew to the UK and worked with the cast and crew and set up a methodology and showed everyone how broadband and linear TV can be integrated.

They were being pigeon-holed. But they had those two BAFTAs and the Emmy. That is worth a lot of clout. ‘And then,’ said Mayfield, ‘We said we wanted to start making our own TV shows, so we did Slide which was fantastic and so much fun and had an amazing online component, and then Secrets and Lies which really set us off.

That was around seven years ago. Since then they have made eight more TV projects, one feature film, a documentary series and an exquisite VR project, Inside Manus commissioned by SBS. It was written by Sutu, who had the artistic idea, and Imrad Mohammed and Abdul Aziz Muhamat who provided the story. It was directed by Lucas Taylor.

Now Hoodlum Entertainment has offices in Queensland and Los Angeles where they maintain development teams who receive submissions and consider them carefully. These days, Brisbane is no longer a suburb of Sydney.