Minister Paul Fletcher keeps the mystery about the government's decisions on regulation, but sets out to prove he understands what the sector is about at SF 2019.
David Tiley 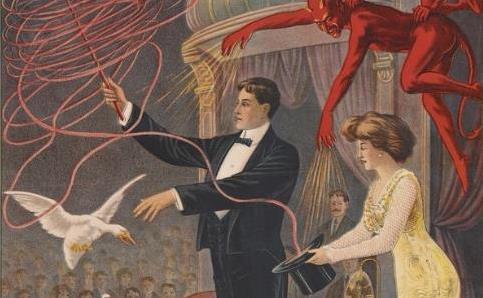 What will the government pull out of the policy hat? Minister Fletcher is still in teasing mode. Image: New York Public Library.

Paul Fletcher, the Minister for Communications, Cyber-safety and the Arts, is sometimes accused of being more comfortable with technical and telecommunications issues than the ambiguities of creative excellence. So his speech to the Screen Forever conference was a strategic move for an audience which is short on numbers but long on headlines when the threats to culture raise their ugly heads.

Ian Robertson, industry lawyer and President of Film Victoria’s Board, did the farewell honours as Screen Forever moves to Queensland next year, pointed out the scale and solidity of the state government’s support for the sector, and then introduced Fletcher. Like Matthew Deaner, he is genuinely supportive of the new(ish) Minister.

In 2015, both Minister for the Arts and Communications Mitch Fifield and his shadow opponent Senator Mark Dreyfus appeared on the same bill at SPA. Dreyfus invoked Whitlam, and played his visionary tune through a golden trumpet. Fifield leant on a figurative fence post, swatted some flies and dusted off his sugar bag of homilies, leaving nothing but vacancy.

Beyond party politics it was a dispiriting sight. We need our politicians to know what they are talking about. Fletcher, to the relief of policy wonks, delivered very well. He understands not just screen as a set of technological changes (as befitting his background) but also the business side in our strange subsidised hybrid (he knows business too) but also has a sense of a sustainable creative sector. He did all this in very unsentimental tones.

He is a technocrat, but he seems able to make more sense of our recent muddle than most decision makers.

The first two thirds of his speech set him up on the same page. He seemed to imply that we don’t need to keep rabbiting on about the need for Australian stories because he (or his office) can repeat the argument back to us. Ditto the need for sustainability, for jobs, and for exports. All cool.

The last third was more interesting, when he began to indicate where he is trying to take us. He didn’t say too much, and joked that after all he is a politician, with those party disciplines. He recommitted the government to announcing its response to the ACCC Digital platforms enquiry so we will finally get to see a decisive response.

He listed out all the support mechanisms provided by government to the Australian sector, which are impressive.

The production generated in response to quotas and regulations from the commercial networks and Foxtel yield an estimated $1.6 billion in spending on Australian content. Screen Australia provides $82 million each year, generating $183 million in production. $27 million is spent on AFTRS, the Australian Children’s Television Foundation and Ausfilm. The producer offset provided $383.7 million, which conjured $1.6 billion in production expenditure. The Location Incentive is about $35 million/year to bring in $970 million already.

He pointed out that the ABC and SBS get about $1.4 billion between them.That is not quite fair because the amount actually spent on production, internal and external related to non-news material is a lot less.

He didn’t say it, but the Australian sector is pretty well supported compared to most other places, certainly on a per capita basis. He also didn’t talk about the decline in support.

Then the Minister produced a nifty rabbit out of the hat. Here it is:

‘What do Taxpayers Get For Their Money

‘If we rank all Australians by the amount of personal income tax they pay, from smallest to largest, and take the person in the middle, that person pays about ten thousand dollars a year in tax.  You would remember from high school maths that this is the ‘median’. So it takes fifty thousand median Australian taxpayers to fund what goes to the screen sector.

‘Those Australians are entitled to expect your sector to use that money wisely.  It needs to tell great stories; and it needs to get as many people as possible seeing those stories.’

This is an odd statement. We could say, using his own figures that the government has invested $500 million to get $2.7 billion dollars back. The washing machine is more complicated than that because it leaves out state government expenditure and also doesn’t credit foreign spend here properly.  Tell that to a taxpayer and they might say it is a good deal.

Also, the government’s revenue is more than personal income tax. It is actually a bit under half – the rest comes from company tax and GST. Some would argue that it would be even better if companies did pay their tax.

Here is the real nitty gritty of the speech:

‘The ACCC found that Australia’s media regulatory framework is outdated and reflects industry structures as they stood in the early 1990s – and crucially before the advent and increasing dominance of online services.

For example, different rules apply to content depending on whether it is distributed on free-to-air television, subscription television or on subscription video on demand services.

The Inquiry found that despite the increasingly significant role played by digital platforms in distributing content to Australian consumers virtually no regulation applies to these services.

Indeed, the bulk of Australian content obligations only apply to commercial free-to-air television broadcasters – despite newer SVOD services being accessed by more than 10 million Australians.

One of the ACCC’s 23 recommendations was that the government should harmonise the regulation of Australian media – so that businesses which compete to serve the same audiences should as much as possible face similar regulatory requirements, regardless of which technology they use to serve their content to those audiences.

The ACCC’s recommendations raise important questions for your sector.

Should there be content obligations imposed on SVOD businesses?

Do the content obligations in their current form fit with the way that consumers are consuming content today?

Do our funding arrangements work as well as they could to support Australian productions getting onto global SVOD platforms?

When Treasurer Josh Frydenberg and I released the ACCC’s report, we said we would consult on its recommendations and the Government would release our response to them before the end of this year.

As I have said before, I expect our response to set out a pathway the Government will take to engage with these and other issues and to reach decisions on them.

I have appreciated the engagement with your sector to date to better understand these issues – and I certainly want to maintain that close engagement.’

We will know the results by the end of the year.