The Reuters Institute annual survey on digital news covers covers 75,000 news users in 38 countries who were polled in January 2019.
ScreenHub 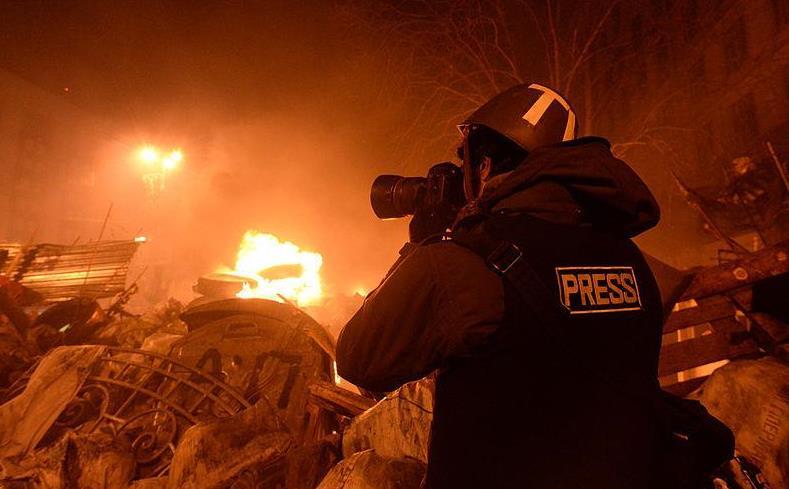 Any night, somewhere on Earth. Actually this is Ukraine in 2014, by Mstyslav Chernov.

Reuters is a huge international source of traditionally constructed syndicated journalism. Part of the profits go into the Reuters Institute which has almost unique experience of the global news environment across all media. You want a unified point of view? Here it is, via that 75,000 person sample interrogated by YouGov.

The annual Digital News Report  comes with a nifty clip which is instructive and compelling. But first, some background.

The introduction tempts us with these key findings:

According to the separate summary,

Against this background of declining confidence [and the rise of fake media] we are seeing some real shifts of focus. News organisations are increasingly looking to subscription and membership or other forms of reader contribution to pay the bills in a so-called ‘pivot to paid’. Platforms are rethinking their responsibilities in the face of events (Christchurch attacks, Molly Russell suicide) and regulatory threats, with Facebook rebalancing its business towards messaging apps and groups – the so-called ‘pivot to private’. Meanwhile audiences continue to embrace on-demand formats with new excitement around podcasts (New York Times, Guardian) and voice technologies – the so-called ‘pivot to audio’.

The big takeout? Podcasts are going gangbusters. As Caroline Fisher from the News and Media Research Centre at the University of Canberra wrote of Australia on page 132 of the report,

Podcasts continue to be popular in Australia, particularly amongst the under 35s (43%). The highest award for journalism excellence, the Gold Walkley Award, went to Hedley Thomas from The Australian newspaper for an investigative podcast series called ‘The Teacher’s Pet’ about an unsolved murder. It had a global audience of more than 27m listeners. For a traditional newspaper journalist to win for a piece of audio journalism marks the massive transformation of the news industry away from single to multiplatform reporting.

In a single month, says the report, 27% of Australians listened to a podcast, 14% pay for online news, 27% share it on the net, and 19% comment on the news by social or website.

The Canberra News and Media Centre provides the Australian data to Reuters and breaks out the results in its own document which came out last June. We are going off politics something terrible as 62% of respondents now actively avoid the news, up 5% in a year. Some mental fugitives also admit they care about the news, like 58% of the population.  So at least 4% are hanging in with gritted teeth.

They are presumably among the 55% who think the media does not hold the powerful to account. This idealism does not translate into cold, hard cash as only 14% pay for online news, which is also the international average. Oddly, 17% of men pay compared to 10% of women.

Faith in the media is being replaced by a colossal swing to agnosticism. 62% are worried about fake news, while, in the words of the report,

…only 9% of Australian online news consumers would prioritise paying for news over a video streaming services such as Netflix, Amazon or Stan.

The soul is fed by dreams rather than truths.

Check out the handy Reuters summary, turn off the useless sound and stay for some solutions envisaged in the year since this research was collected.

The future is culture management

Last November, the Institute put out a discussion document on European policy options which it claims are relevant to Australia as well.

The whole report is worth a read. It emphasises that we can’t think of a healthy environment for journalism by focusing on individual organisations like the ABC or Murdoch. Instead, we have to create a context which works for every news worker in every organisation and form of communication. Keep that up and we will remember that journalism is a profession.

There are plenty of factoid summaries on that video page as well.