There are aspirational role models aplenty for future filmmakers on Groote Eylandt in a continuation and expansion of the Our Story empowerment project that started in 2011.
ArtsHub
[This is archived content and may not display in the originally intended format.] 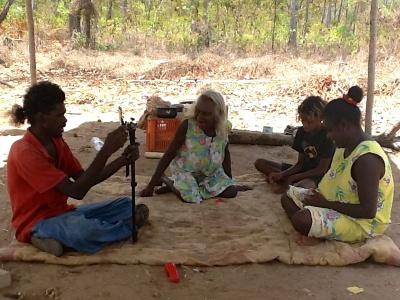 A disease few of us have heard of has emerged as a major public health issue in remote communities across the Top End. Using iPads and an electronic database, a young crew of filmmakers are capturing as many stories as they can in the affected communities through the Our Story project that began in 2011 and has now expanded as the need increases. Project Manager Ange Jane reports on the project, the disease and the people making the films:

A collaborative partnership between the NT Library i-stories team and the MJD Foundation enabled the continuation and expansion of the MJD Foundation’s project Our Story, the 2011 innovative art, education, cultural and economic empowerment project. Our Story is a project that enabled two young men who have Machado Joseph Disease (MJD) to capture their stories while they can still speak. These are stories about their country, their traditional stories and their passions such as making spears, swimming and AFL.

Last year, an additional three Groote Eylandters were offered casual employment to film and edit their communities’ stories using the iPad. Steve Wurramara, who was one of the original grant recipients for Our Story, leads the team and passes on his iPad skills and knowledge of filmmaking.

MJD Foundation’s Project Manager Ange Jane said, “I think the most exciting aspect of this project is that I have taken myself out of a job! Steve’s skills using the iPad and teaching others in the community are far superior and he is the iPad guru. He is a role model for his community – and that is not because he has MJD, a debilitating disability – it is because he has real talent and dedication to capturing his community’s stories.”

Now the MJD Foundation film crew has grown to six and there are crews working across the three Groote Eylandt communities – Angurugu, Umbakumba and Milyakburra. The project has enabled Groote Eylandters who have Machado Joseph Disease (MJD) to capture their stories while they can still speak (people with MJD lose the ability to speak as the disease progresses). The filmmakers tell their stories how they want to. They film their country, their traditional stories, their Elders, their family heritage and their passions.

Stories are captured for future generations. The movies are stored on Angurugu Library’s Community Stories, an electronic community database and some are publicly available on the MJD Foundation YouTube Channel.

Across the Top End of Australia, MJD, a complex and devastating disease, is emerging as a major public health issue. Currently, there are over 500 Indigenous Australians who are alive today that are at risk of having MJD with half of those being under the age of 18. MJD, a spinocerebellar ataxia, is a hereditary neurodegenerative condition for which there is no known cure. Most people are wheelchair-bound and fully dependent for all activities of daily living within 5-10 years of the first symptoms emerging and death usually occurs 15-20 years after onset.

Want to find out more about how the MJD Foundation uses new technologies such as the iPad to empower people with MJD? Visit the foundation’s website or email the project manager ange.jane@mjd.org.au.

Our Story would not have been possible without the support of the Anindilyakwa Land Council, the Regional Arts Fund, delivered in partnership with the Northern Territory Government, and our local sponsors — Anglicare, GEBIE, Angurugu Community School, Carers NT, and Pole 13.

In the clip below, Steve Wurramara shows how he makes spears on Groote Eylandt.