Box Office: peak documentary but you have to be quick

The recent Australian International Documentary Conference (AIDC, 6–9 March 2022) surfaced two films which are currently running.  Australian celebration of Archie and Ruby Hunter, Wash My Soul in the River’s Flow, directed by Philippa Bateman, came out this week on 39 screens to make all of $23,000. It is based on the legendary 2004 concert...
David Tiley 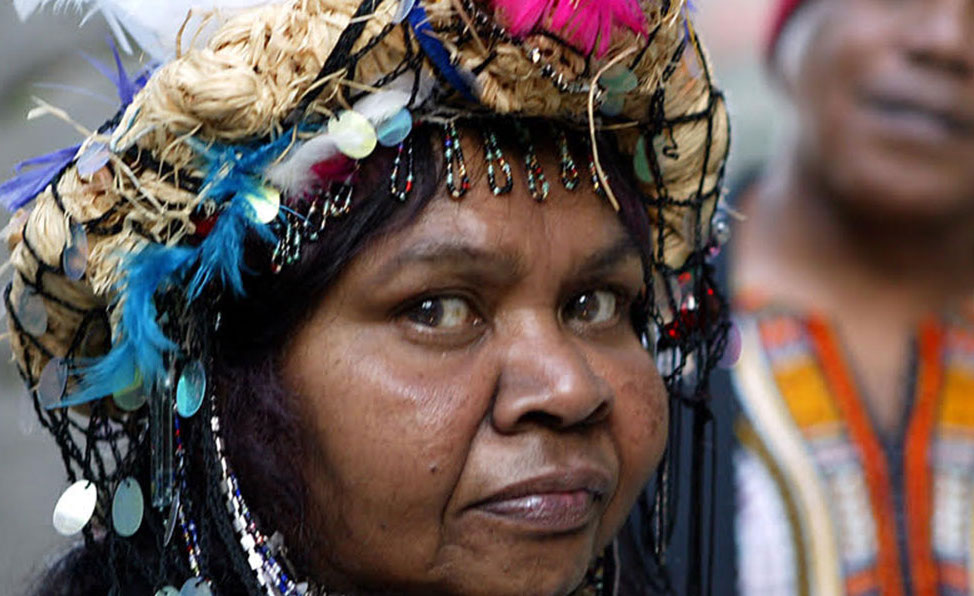 Ruby Hunter at the original 2004 concert for Wash My Soul in the River’s Flow. Image by Sandy Scheltema via MIFF.

Australian celebration of Archie and Ruby Hunter, Wash My Soul in the River’s Flow, directed by Philippa Bateman, came out this week on 39 screens to make all of $23,000. It is based on the legendary 2004 concert Kura Tungar – Songs From the River, in which Archie and Ruby work with Paul Grabowski and the Australian Art Orchestra. Spurn this film and it will disappear, so fans should race out and embrace it. If you have an emotional bone in your body, you will regret letting it slide.

Flee, launched by Madman four weeks ago, is out on 11 screens and took $22,000 last weekend. Jonas Poher Rasmussen’s mostly animated film explores the life of his friend, here called Amin, a gay Afghani who escaped to Denmark as a child. It has already made Oscars history as the first film to be nominated for Best Documentary, Best Foreign Feature and Best Animation together.

Luke Goodsell on the ABC calls it ‘a carefully calibrated, compassionate work that’s moving and deeply personal. It resonates as an exploration of displacement and cultural identity, and as an indictment of global neglect, as lives are torn asunder by power struggles between meddling superpowers and ideological regimes.’

Also out and about is Chef Antonio’s Recipes for Revolution, written and directed by Trevor Graham, one of those rare individuals with traditional television-friendly talents who keeps working as an independent. This film is about Chef Antonio de Benedetto who set up the world’s first ethical hotel in the Italian town of Asti, to train and work with young people living with Down syndrome.

Antidote Films has been running a series of single screenings across Australia which is worth checking to see if there is a slot in your town.

The scene is a mess at the moment, as Palace is running the Alliance Francais French Film Festival, while the Randwick/Lido/Classic Tamir family circuit has both the Jewish and the Europa Film Festival so there is a heap of stuff which a) flashes by and b) doesn’t show up in the box office figures. That is a reassuring fact because it means audiences for adult fare are not as dire as they seem.

A Stitch in Time fired up its sewing machine four weeks ago, is running on 23 screens and has made $162,000. Written, directed and produced by Sasha Hadden, this modest Australian indy feature has been supported by Julian Wood at Filmink, partly because singer-songwriter Glenn Shorrock turns out to be a good actor. Don McAlpine was cinematographer, and also an executive producer along with Sue Millikan.

Our revered critic Adrian Martin has written about The Souvenir Part II, partly to explore the film-within-a-film trope.

Unfortunately this picture is a sequel, and the original ran for a single week in 2006, to make $80,000. Part II came out last weekend on eight screens to take all of $2,500. I thought we had more Tilda Swinton fans – and this picture stars her daughter, Honor Swinton Byrne.

Bergman Island, by Mia Hansen-Løve, is a French-Mexican-Brazilian-German production in English, starring our very own Mia Wasikowska. It is set on Bergman’s favourite place, is about a pair of filmmakers, is seen as ‘slippery and enchanting’, by the New York Times and a ‘heartstoppingly poignant stunner by Indiewire. Hansen-Løve is actually French and made All is Forgiven, The Father of My Children and Things to Come – all respected by cineastes. It launched on 33 cinemas for $27,000.

Plonk doc Blind Ambition has made $91,000 in two weeks; surfing film Facing Monsters has collected $24,000 off 43 screens in week one, but the previews take it to a much healthier $189,000. Why would I care? It was directed by Bentley Dean, who directed the excellent Pacific Island drama Tanna in 2015, and will one day be recognised as patient and generous auteur.

Ruby’s Choice, made by Michael Budd from a script by Paul Mahoney, starring Jane Seymour and Jacqueline McKenzie, has been waiting to land for a while. It did very well to go out on 121 screens, but only managed $23,000 in week two, which took the total to $114,000. Films about dementia can be tough to sell, though The Father and Still Alice cut through on the back of excellent casting and deep authenticity.

Bored yet? Here is a shakeup. Slot three belongs to BTS Permission to Dance on Stage – Seoul Live Viewing, via Trafalgar Releasing: 86 screens, $704,000 in a weekend.

What is this thing? It is an example of a trend I really like, because it creates a unique feeling of international togetherness among fans. BTS is Break The Silence, a K-pop boy group, active since 2010 and also known as Bangtan Boys and Bulletproof Boy Scouts. They broke through to a more genuine version of teenage angst, and sold over 32m albums in Korea alone. The event is a once-only worldwide screening, officially live but delayed because of the planet’s tendency to rotate.

It made $45m around the world in a single schlep which breaks the box office record for a specialty event release. Some $9.4m came from the US off a mere 804 cinemas, so the release was smaller on a per capita basis than Australia, despite the large Korean community in North America.

Number four illustrates the sheer decrepitude of the current releases. In its first week, Radhe Shyam arrived on 95 screens to take $377,000, which is a satisfactory result given the current shortage of students for the specialty market. It was shot in both Teluga and Hindi; it did well in the minority language and very badly in Hindi. Accused of shoddy scripting, it concerns the lovesick trajectory of a professional palmist who falls in love with a conflicted doctor and suffers ‘the war between love and destiny’.

We have to go back to the beginning of November last year to find a number four slot which is so bad. Sooryavanshi made $366,000 off 67 screens in its second weekend with a total of $1.26m.

Eagle eyed readers will know that last week I claimed that Belfast was winning. In fact I allowed my flagrant bias for arthouse movies to scramble my mind and flip the numbers over. Belfast has actually been out for one week longer than Death on the Nile, at $3.85m rather than $5.37m. Curses I cry and twist my monocle so hard it falls into my delicately infused cup of Lapsang Soochong.

However, Belfast may have cost around $55m to make, up against $125m for Death on the Nile, so it is ahead as an investment. Mind you, those figures are unbelievably dodgy. Some pundits are arguing that the picture could come through for the Oscars though The Power of a Dog and Jane Campion are firm favourites for the two key statuettes.

Cyrano continues its dreadful run, with all of $341,000 in the kitty, a total of $12,000 off 72 screens this weekend and a loss of 74% as exhibitors abandon ship to the tune of 117 screens. All for a decorative film with great actors beloved on television.

Encanto, the Mexican themed family animation, is still around on 25 screens after 15 weeks to take $18,000 to add a tiny crystal of affection to its $6.34m take. It will probably win Best Animation at the Oscars. Drive My Car is also a contender, now on 22 screens after five weeks, with $339,000 in box office. A minor result and much lower than the film deserves so I fear my campaign to bring audiences is failing.