Big Screen Highlights – from Scary Stories to fast horses, the kids are on top

New releases seems hell bent on twisting young minds with horror but refuge may be found in Ride Like a Girl and Buoyancy. Or deep space with Brad Pitt and deep time with Rembrandt.
Screenhub Hivemind 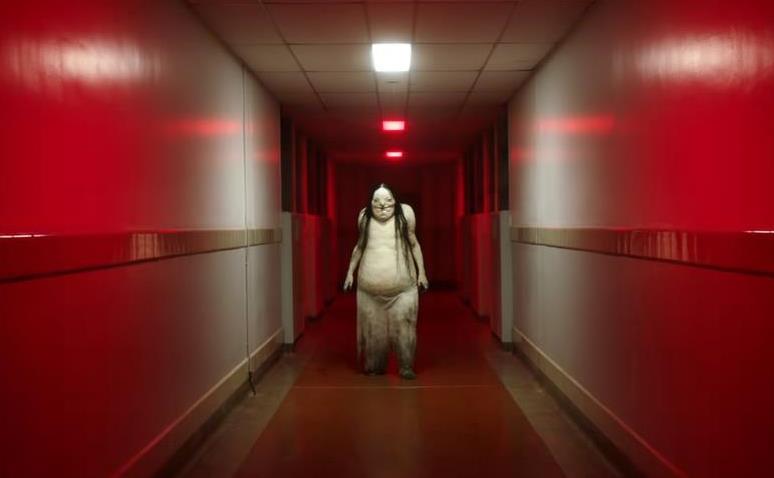 This is said to be Del Toro’s favourite part of Scarey Stories to Tell in the Dark.

There is a split in the Hivemind! Earnest discussions spread across the office and out to our phonecalls. Ride Like a Girl opens today on wide release, backed strongly by Transmission Films.

Combat in the office

Opinion one: I don’t get horses. I don’t like racing. I have no interest in this film at all.

Reply: How can you not possibly love horses? I used to be one for the first five years of my life…

Opinion two: We don’t get inside the main character.

Reply: It is not a naturalistic psychodrama. Of course we understand her.

Reply: They do politics talking too much.

Reply: Are you some kind of robot? I cried a bucket, I couldn’t take my eyes off it, I danced in the foyer.

Do we agree with anything over this film? Yes. It is good holiday entertainment, there’s something in it for the whole family and a lot of audiences will love it.

Also, this weekend sees the release of another Australian film with nothing like the publicity budget or the range. Buoyancy doesn’t even look like cheer-up pleasure, but the Hivemind is united in our respect and affection for the film. Our reviewer Anthony Morris gives it four stars.

While the film is set inside the modern slave trade in the Thai/Cambodian fishing fleets, it is a mature study of resilience as a fourteen year old boy survives, turns the tables and leaves us wondering just who and what he has become. The performances, scattered around four languages and cultures, often in fragments, anchored to the power of silence, are compelling. The picture is strongly cinematic, even though the visual space is so confined.

I thought I would respect this film for its discipline from director Rob Rathjen and the producing team of Samantha Jennings, Kristina Ceyton, and Rita Walsh, but I was completely absorbed by the story and the aesthetic together.

Who will win the school holiday wars?

Ugly Dolls starts this weekend. It looks like a picture for the littlies, with an endearing message about self acceptance, but it has already bombed in the US. However, it looks cool and it does have songs and it is a successor to the Trolls tradition. The film tragics will notice that this film is made between China, the US and Canada and its ultimate DNA is the 2001 line of plush toys invented in a long range collaboration between David Horvath and Sun-min Kim.

Scary Stories to Tell in the Dark is a teen horror film which also works for tweens, according to reviews on Rotten Tomatoes which vary from unconvinced to pretty impressed.

A young girl writes a series of horrifying stories, which really do exist and are rediscovered by a group of teens who find out they are named in the stories… etc.

There is a certain adult interest in this. The original stories were written by folklore expert Alvin Schwartz and Guillermo Del Toro was involved in its leisurely development for CBS Films. We expect an underlying sense of glee in the scares and characters with lots of neat details for the true fans.

The director André Øvredal comes with a good pedigree. He made Trollhunter, The Autopsy of Jane Doe and Tunnelen.

The Dead Don’t Die has an ordinary (comic) premise –  small town, horde of zombies, local cops fight back. The charm of this is the people involved. It is written and directed by indie hero Jim Jarmusch with an ensemble cast that includes Bill Murray, Tilda Swinton, Iggy Pop, Selena Gomez.. what’s not to like? Adrian Martin reviews it for us with three stars here.

In the US it did not really break out in its May release and ended up with a bit less than AU$20m. We are really seeing the odds and ends of a campaign, kept for our school holidays, released as a prequel to Halloween. Maybe we can raise it from the dead?

Ad Astra came out last week and its science fiction charms have a school holiday edge. The Guardian has no less than four goes at encapsulating the picture. Peter Bradshaw came up with this:

Brad Pitt never looked more beautiful than in this mesmeric, flawed, superbly photographed and designed space adventure from director and co-writer James Gray. Pitt plays an astronaut in what is tantalisingly described as the “near future” and Gray’s camera traces the scorched and incised surfaces of distant planets with the same awe that it travels across Brad’s face, savouring the lattice of tiny wrinkles around the eyes, and the discreet harvest of his one-day stubble.

The critical consensus is varied, and an interstellar version of Conrad’s Heart of Darkness twisted through modern Hollywood’s attachment to the secret father who is discovered inside the mind etc etc does sound muddled. No-one seems to relate it to 2001: A Space Odyssey but any chance of a connection would be worth a look for the SF tragics.

The Adam Goodes film The Australian Dream is still around, along with The Nightingale and Angel of Mine. The particular faves from the Hivemind are Parasite, The Farewell and our local favourite, Animals.

It is always worth keeping an eye on the various event offerings. Margaret Atwood: Live in Cinemas is bringing the mind behind The Handmaid’s Tale to arthouse locations.

The specialised art documentaries based on key international exhibitions can be rewarding too. The latest is Rembrandt, about his later works which were exhibited at the National Gallery in London as part of the 350th anniversary of his birth. It opens this weekend and runs across October in various cinemas.

BIFF starts next week. The Palace Lavazza Italian Fest is running now. The program for the Antenna Documentary Film Festival is available.

Let’s end with a trailer which is much calmer than anything else today,